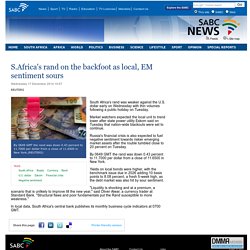 (REUTERS) South Africa's rand was weaker against the U.S. dollar early on Wednesday with thin volumes following a public holiday on Tuesday. Market watchers expected the local unit to trend lower after state power utility Eskom said on Tuesday that nation-wide blackouts were set to continue. Russia's financial crisis is also expected to fuel negative sentiment towards riskier emerging market assets after the rouble tumbled close to 20 percent on Tuesday. By 0649 GMT the rand was down 0.43 percent to 11.7000 per dollar from a close of 11.6500 in New York. 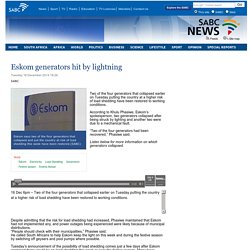 (SABC) Two of the four generators that collapsed earlier on Tuesday putting the country at a higher risk of load shedding have been restored to working conditions. According to Khulu Phasiwe, Eskom’s spokesperson, two generators collapsed after being struck by lighting and another two were due to a mechanical fault. “Two of the four generators had been recovered,” Phasiwe said. Listen below for more information on which generators collapsed. Despite admitting that the risk for load shedding had increased, Phasiwe maintained that Eskom had not implemented any, and power outages being experienced were likely because of municipal distributions. Tuesday’s announcement of the possibility of load shedding comes just a few days after Eskom promised there would be no load shedding this week or over the festive season. Zuma blames racism for energy woes. South African has experienced rolling blackouts for three consecutive weekends. 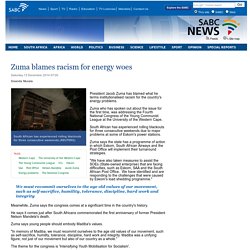 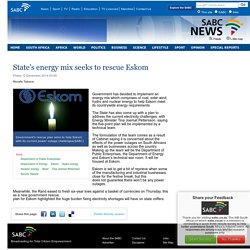 The State has also come up with a plan to address the current electricity challenges, with Energy Minister Tina Joemat Pettersson, saying the five-point plan will be implemented by a technical team. The public questions Eskom. No power cuts: Eskom. SA to sign fuel deals to tackle power crisis. Coal-fired power plant could be the saving grace of South Africa power woes (SABC) South Africa will increase diesel and gas imports and sign a private sector coal-fired power plant deal as it seeks to halt chronic electricity shortages, the cabinet said on Thursday. 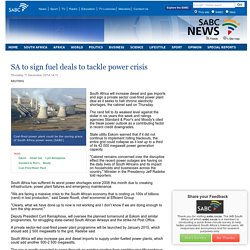 The rand fell to its weakest level against the dollar in six years this week and ratings agencies Standard & Poor's and Moody's cited the bleak power outlook as a contributing factor in recent credit downgrades. State utility Eskom warned that if it did not continue to implement rolling blackouts, the entire grid could collapse as it lost up to a third of its 42 000 megawatt power generation capacity. Power outages affecting businesses, public services. This week is the fourth consecutive week of load shedding and it is said to be the worst since March. 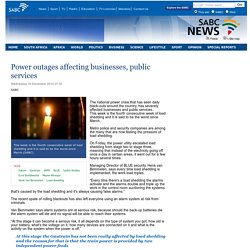 (SABC) The national power crisis that has seen daily black-outs around the country, has severely affected businesses and public services. Electricity supply is likely to be erratic this weekend. Eskom must declare national power crisis: Maimane. Eskom has been at the receiving end of much criticism for the current power blackouts(SABC) Eskom must declare the rolling blackouts a national crisis, DA parliamentary leader Mmusi Maimane said on Tuesday. 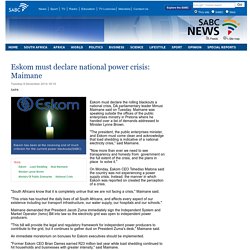 Maimane was speaking outside the offices of the public enterprises ministry in Pretoria where he handed over a list of demands addressed to Minister Lynne Brown. "The president, the public enterprises minister, and Eskom must come clean and acknowledge that load shedding is indicative of a national electricity crisis," said Maimane. "Now more than ever we need to see transparency and honesty from government on the full extent of the crisis, and the plans in place to solve it. " On Monday, Eskom CEO Tshediso Matona said the country was not experiencing a power supply crisis. "South Africans know that it is completely untrue that we are not facing a crisis," Maimane said. Eskom employees arrested for fraud. Two employees of Eskom, together with an accomplice, were arrested for fraud. 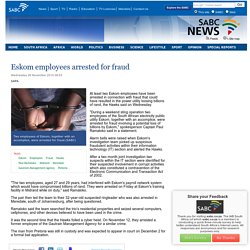 (SABC) At least two Eskom employees have been arrested in connection with fraud that could have resulted in the power utility loosing billions of rand, the Hawks said on Wednesday. "During a weekend sting operation two employees of the South African electricity public utility Eskom, together with an accomplice, were arrested for fraud involving a potential loss of billions by Eskom," spokesperson Captain Paul Ramaloko said in a statement. Alarm bells were raised when Eskom's investigation team picked up suspicious fraudulent activities within their information technology (IT) section and alerted the Hawks.

After a two month joint investigation two suspects within the IT section were identified for their suspected involvement in corrupt activities which also constituted a contravention of the Electronic Communication and Transaction Act of 2002. Economists welcome govt’s plan to overhaul parastatals. Cyril Ramaphosa has been appointed to oversee the turnaround of the three state-owned companies. 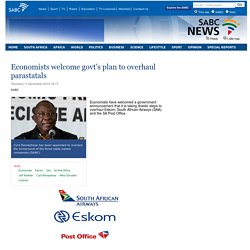 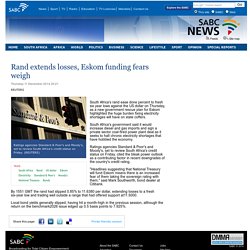 (REUTERS) South Africa's rand ease done percent to fresh six year lows against the US dollar on Thursday, as a new government rescue plan for Eskom highlighted the huge burden fixing electricity shortages will have on state coffers. South Africa's government said it would increase diesel and gas imports and sign a private sector coal-fired power plant deal as it seeks to halt chronic electricity shortages that have hobbled the economy. Ratings agencies Standard & Poor's and Moody's, set to review South Africa's credit status on Friday, cited the bleak power outlook as a contributing factor in recent downgrades of the country's credit rating. "Headlines suggesting that National Treasury will fund Eskom means there is an increased fear of them taking the sovereign rating with them," said Mark Southworth, bond dealer at Citibank. Coal silo collapses at Majuba:Sunday 2 November 2014. Eskom says it will bring mobile coal conveyer belts from other stations to Majuba as a temporary solution.

Two top Eskom executives resign. Eskom has confirmed the resignations of two executive members Steve Lennon and Erica Johnson. (SABC) Two of Eskom's top executives have resigned, the parastatal confirmed on Wednesday. Eskom's Group Executive for Sustainability Steve Lennon would leave at the end of March 2015 and Group Executive Enterprise Development and Acting Group Executive of Customer Services Erica Johnson leaves at the end of October, spokesperson Andrew Etzinger said. "Yes I can confirm that they have resigned. Eskom defends Megawatt Park upgrades proposal. Andrew Etzinger says the overhaul has been part of Eskom’s plans since 2012. (SABC) Eskom has defended the proposed R500 million upgrades to its head office Megawatt Park based in Johannesburg, citing the necessity despite its financial constraints.

The electricity public utility spokesperson, Andrew Etzinger, says: “The building is 35 years old and in serious state of repair…We will re-service the building and put it in a position for the next 30 years which is the least cost alternative.” “[It’s] a painful decision, a frustrating one, because we are cash-strapped…but it has to be done unfortunately,” Etzinger told SAfm's AM Live. He says the overhaul has been part of Eskom’s plans since 2012.

Eskom signs Areva contract. The power utility says it hopes to install six new steam generators in 2018. (SABC) Eskom says it has signed a contract with French nuclear and renewable energy company Areva for the replacement of Koeberg power station's steam generators. The power utility says it hopes to install the six new steam generators at Koeberg in 2018. Areva's bid for the R4 billion tender was contested by Westinghouse Electric SA. On Friday, the High Court in Johannesburg ruled that Eskom had five days to hand over tender documents for the generators to Westinghouse. Westinghouse had alleged there was foul play in awarding the tender and said it had reliably learned that it had in fact won it. Eskom denies total blackout tweet:Sunday 7 December 2014. In an interview with the SABC, Eskom spokesperson Andrew Etzinger warned that there is a risk of a total blackout if consumers do not use electricity sparingly.