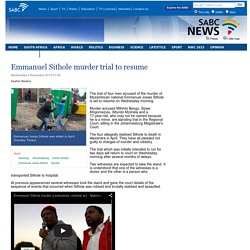 (Sunday Times) The trial of four men accused of the murder of Mozambican national Emmanuel Josias Sithole is set to resume on Wednesday morning. Murder accused Mthinto Bengu, Sizwe Mngomezulu, Sifundo Mzimela and a 17-year-old, who may not be named because he is a minor, are standing trial in the Regional Court, sitting in the Johannesburg Magistrate's Court. The four allegedly stabbed Sithole to death in Alexandra in April. They have all pleaded not guilty to charges of murder and robbery. The trial which was initially intended to run for two days will return to court on Wednesday morning after several months of delays. Two witnesses are expected to take the stand. At previous appearances several witnesses took the stand and gave the court details of the sequence of events that occurred when Sithole was robbed and brutally stabbed and assaulted. 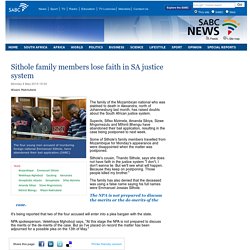 (SABC) The family of the Mozambican national who was stabbed to death in Alexandra, north of Johannesburg last month, has raised doubts about the South African justice system. Supects, Sifiso Mzimela, Amanda Sibiya, Sizwe Mngomezulu and Mthinti Bhengu have abandoned their bail application, resulting in the case being postponed to next week. Some of Sithole's family members travelled from Mozambique for Monday's appearance and were disappointed when the matter was postponed. Sithole's cousin, Thando Sithole, says she does not have faith in the justice system "I don't, I don't wanna lie. The family has also denied that the deceased was using a false name saying his full names were Emmanuel Jossias Sithole. Police to oppose bail in Sithole murder case:Monday 20 April 2015. Emmanuel Sithole was stabbed to death in Alexander on Saturday. 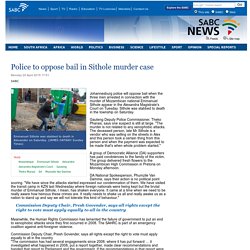 (JAMES OATWAY Sunday Times) Johannesburg police will oppose bail when the three men arrested in connection with the murder of Mozambican national Emmanuel Sithole appear in the Alexandra Magistrate's Court on Tuesday. Sithole was stabbed to death in the township on Saturday. Gauteng Deputy Police Commissioner, Theko Pharasi, says one suspect is still at large. "The murder is not related to any xenophobic attacks. A group of Democratic Alliance (DA) supporters has paid condolences to the family of the victim. DA National Spokesperson, Phumzile Van Damme, says their action is no political point scoring.

Commission Deputy Chair, Presh Govender, says all rights except the right to vote must apply equally to all in the country Meanwhile, the Human Rights Commission has lamented the failure of government to put an end to xenophobic attacks since they first occurred in 2008. Zuma apologises to Mozambicans for xenophobic attacks:Wednesday 20 May 2015. President Jacob Zuma and his counterpart Filipe Nyusi met in Maputo on Wednesday. 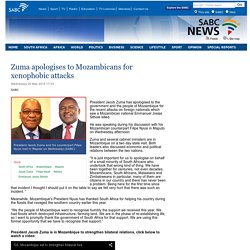 (SABC) President Jacob Zuma has apologised to the government and the people of Mozambique for the recent attacks on foreign nationals which saw a Mozambican national Emmanuel Josias Sithole killed. He was speaking during his discussion with his Mozambican counterpart Filipe Nyusi in Maputo on Wednesday afternoon. Zuma and several cabinet ministers are in Mozambique on a two day state visit. Both leaders also discussed economic and political relations between the two nations. “It is just important for us to apologise on behalf of a small minority of South Africans who undertook that wrong kind of thing. Meanwhile, Mozambique's President Nyusi has thanked South Africa for helping his country during the floods that ravaged the southern country earlier this year.

“We the people of Mozambique want to recognise humbly the support we received this year. Plea for Alexandra residents to attend Sitholes memorial service :Tuesday 28 April 2015. Emmanuel Sithole was stabbed to death in Alexander two weeks ago. 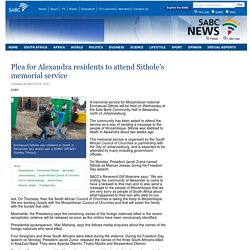 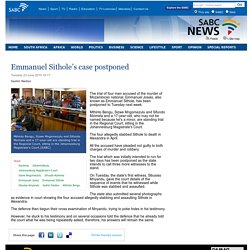 (SABC) “Emmanuel Sithole” murder accused back in court:Monday 4 May 2015. The four men are accused of murdering and robbing Mozambican national Manuel Jossias. 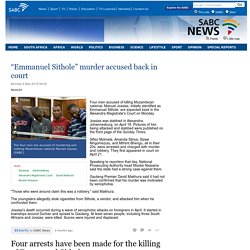 (SABC) Four men accused of killing Mozambican national, Manuel Jossias, initially identified as Emmanuel Sithole, are expected back in the Alexandra Magistrate's Court on Monday. Jossias was stabbed in Alexandra, Johannesburg, on April 18. Pictures of him being attacked and stabbed were published on the front page of the Sunday Times. Sifiso Mzimela, Amanda Sibiya, Sizwe Mngomezulu, and Mthinti Bhengu, all in their 20s, were arrested and charged with murder and robbery.

Speaking to reporters that day, National Prosecuting Authority head Mxolisi Nxasana said the state had a strong case against them. Gauteng Premier David Makhura said it had not been confirmed that his murder was motivated by xenophobia. "Those who were around claim this was a robbery," said Makhura. The youngsters allegedly stole cigarettes from Sithole, a vendor, and attacked him when he confronted them.