Sadtu calls for Curro schools closure:Monday 22 June 2015. Incidents at Curro Foundation School have put a spotlight on racism in schools. 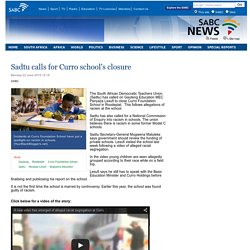 (YourBlackBloggers.net) The South African Democratic Teachers Union (Sadtu) has called on Gauteng Education MEC Panyaza Lesufi to close Curro Foundation School in Roodeplat. This follows allegations of racism at the school. Sadtu has also called for a National Commission of Enquiry into racism in schools. The union believes there is racism in some former Model C schools. Sadtu Secretary-General Mugwena Maluleke says government should review the funding of private schools. In the video young children are seen allegedly grouped according to their race while on a field trip. Lesufi says he still has to speak with the Basic Education Minister and Curro Holdings before finalising and publicising his report on the school.

MEC hints on Curro Roodeplaat closure:Saturday 20 June 2015. The school has been dogged by racial segregation allegations. 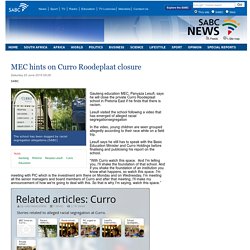 (SABC) Gauteng education MEC, Panyaza Lesufi, says he will close the private Curro Roodeplaat school in Pretoria East if he finds that there is racism. Lesufi visited the school following a video that has emerged of alleged racial segregationsegregation In the video, young children are seen grouped allegedly according to their race while on a field trip. Lesufi says he still has to speak with the Basic Education Minister and Curro Holdings before finalising and publicising his report on the school. “With Curro watch this space. Related articles: Curro, by sabcnewsonline [<a href="//storify.com/sabcnewsonline/curro-under-fire" target="_blank" title="">View the story "Curro under fire" on Storify</a>] 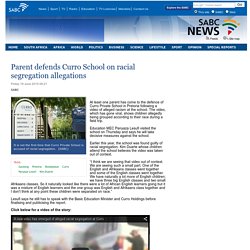 (SABC) At least one parent has come to the defence of Curro Private School in Pretoria following a video of alleged racism at the school. The video, which has gone viral, shows children allegedly being grouped according to their race during a field trip. Lesufi compiles damning report against Curro school:Thursday 18 June 2015. Racist school operating license to be reviewed :Thursday 14 May 2015. MEC Lesufi says that achieving social cohesion in schools is a goal. 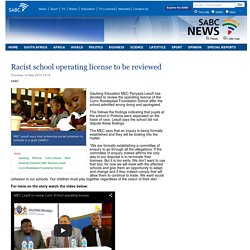 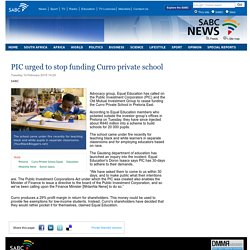 (YourBlackBloggers.net) Advocacy group, Equal Education has called on the Public Investment Corporation (PIC) and the Old Mutual Investment Group to cease funding the Curro Private School in Pretoria East. According to Equal Education members who picketed outside the investor group's offices in Pretoria on Tuesday, they have since injected about R440 million into a scheme to build schools for 20 000 pupils. The school came under fire recently for teaching black and white learners in separate classrooms and for employing educators based on race. The Gauteng department of education has launched an inquiry into the incident. “We have asked them to come to us within 30 days, and to make public what their intentions are.

Curro produces a 29% profit margin in return for shareholders. Lesufi’s intervention at Curro Private School welcomed:Monday 2 February 2015. It is alleged that the school separated learners according to race, while only white teachers were hired at the school. 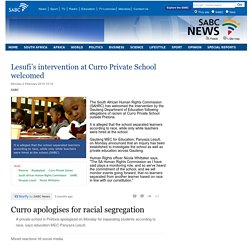 School apologises for racial segregation:Monday 2 February 2015. The school says plans for integration were under way. 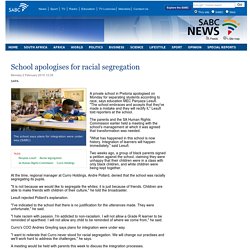 (SABC) A private school in Pretoria apologised on Monday for separating students according to race, says education MEC Panyaza Lesufi. "The school embraces and accepts that they've made a mistake and they will rectify it," Lesufi told reporters at the school. The parents and the SA Human Rights Commission earlier held a meeting with the school's management at which it was agreed that transformation was needed.

"What has happened in this school is now history. Two weeks ago, a group of black parents signed a petition against the school, claiming they were unhappy that their children were in a class with only black children, and white children were being kept together. At the time, regional manager at Curro Holdings, Andre Pollard, denied that the school was racially segregating its pupils. "It is not because we would like to segregate the whites; it is just because of friends. Lesufi rejected Pollard's explanation. Private school segretation shocking: Kathrada:Friday 30 January 2015. A school in Pretoria has been accused of separating learners into different classrooms abased on their races, and not integrating the learners (SABC) Reports of racial segregation at a private school in Pretoria are a shocking indication of the persistence of racism in post-apartheid South Africa, the Ahmed Kathrada Foundation said on Friday. 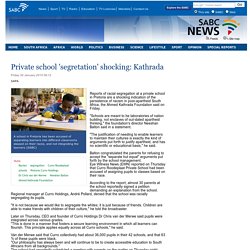 "Schools are meant to be laboratories of nation building, not enclaves of out-dated apartheid thinking," the foundation's director Neeshan Balton said in a statement. "The justification of needing to enable learners to maintain their cultures is exactly the kind of arguments put forth to justify apartheid, and has no scientific or educational basis," he said.