Euthanasia ruling and the "Right-to-Die" 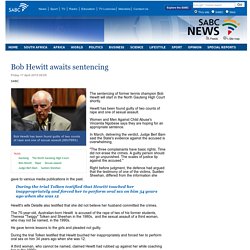 (REUTERS) The sentencing of former tennis champion Bob Hewitt will start in the North Gauteng High Court shortly. Hewitt has been found guilty of two counts of rape and one of sexual assault. Women and Men Against Child Abuse's Vincentia Ngobese says they are hoping for an appropriate sentence. In March, delivering the verdict, Judge Bert Bam said the State's evidence against the accused is overwhelming. "The three complainants have basic rights. Right before judgment, the defence had argued that the testimony of one of the victims, Suellen Sheehan, differed from the information she gave to various media publications in the past.

During the trial Tolken testified that Hewitt touched her inappropriately and forced her to perform oral sex on him 34 years ago when she was 12 Hewitt's wife Delaille also testified that she did not believe her husband committed the crimes. Former grand slam champ found guilty of sexual assault:Monday 23 March 2015. Hewitt to appear in court for rape :Friday 10 January 2014. 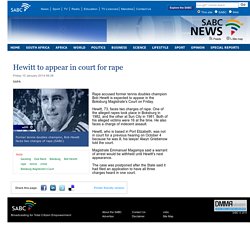 (SABC) Rape accused former tennis doubles champion Bob Hewitt is expected to appear in the Boksburg Magistrate's Court on Friday. Hewitt, 73, faces two charges of rape. One of the alleged rapes took place in Boksburg in 1982, and the other at Sun City in 1981. Both of his alleged victims were 16 at the time. Hewitt, who is based in Port Elizabeth, was not in court for a previous hearing on October 4 because he was ill, his lawyer Alwyn Griebenow told the court. Magistrate Emmanuel Magampa said a warrant of arrest would be withheld until Hewitt's next appearance.

The case was postponed after the State said it had filed an application to have all three charges heard in one court. I am innocent: Bob Hewitt:Friday 21 June 2013. Accused: Bob Hewitt - the former Grand Slam tennis doubles champion - denies he sexually molested young women he coached decades ago in South Africa . 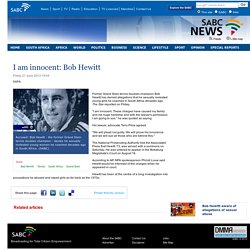 (SABC) Former Grand Slam tennis doubles champion Bob Hewitt has denied allegations that he sexually molested young girls he coached in South Africa decades ago, The Star reported on Friday. "I am innocent. These charges have caused my family and me huge hardship and with the lawyer's permission I am going to sue," he was quoted as saying. His lawyer, advocate Terry Price agreed. "We will plead not guilty. The National Prosecuting Authority told the Associated Press that Hewitt, 73, was served with a summons on Saturday. According to AP, NPA spokesperson Phindi Louw said Hewitt would be informed of the charges when he appeared in court. Hewitt has been at the centre of a long investigation into accusations he abused and raped girls as far back as the 1970s. Court hears more details on Hewitt rape allegations:Tuesday 10 February 2015.

Former tennis champion Bob Hewitt is facing two charges of rape and one of indecent assault and he has pleaded not guilty. 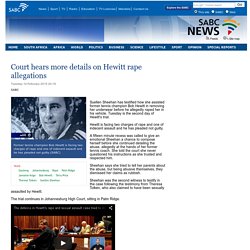 (SABC) Suellen Sheehan has testified how she assisted former tennis champion Bob Hewitt in removing her underwear before he allegedly raped her in his vehicle. Tuesday is the second day of Hewitt's trial. Hewitt is facing two charges of rape and one of indecent assault and he has pleaded not guilty. A fifteen minute recess was called to give an emotional Sheehan a chance to compose herself before she continued detailing the abuse, allegedly at the hands of her former tennis coach. Sheehan says she tried to tell her parents about the abuse, but being abusive themselves, they dismissed her claims as rubbish. Sheehan was the second witness to testify in the case following the testimony from Theresa Tolken, who also claimed to have been sexually assaulted by Hewitt. 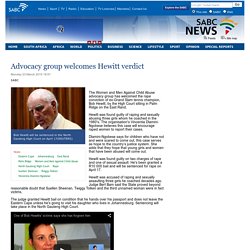 Hewitt was found guilty of raping and sexually abusing three girls whom he coached in the 1980's. The organisation's Vincentia Dlamini-Ngobese believes this case will encourage raped women to report their cases. Dlamini-Ngobese says for children who have not and were scared to come out, this case serves as hope to the country’s justice system. She adds that they hope that young girls and women that have been abused will come out.