Related Stories: HIV/Aids epidemic. Scientist who discovered Ebola frustrated by deadly Guinea outbreak:Tuesday 25 March 2014. Guinea confirms fever is Ebola, has killed up to 59:Sunday 23 March 2014. The Ebola disease has killed 59 people in Guinea(REUTERS) Guinea has received confirmation that a mysterious disease that has killed 59 people in the West African country, and may have spread to neighbouring Sierra Leone, is the haemorrhagic fever Ebola, the government says. 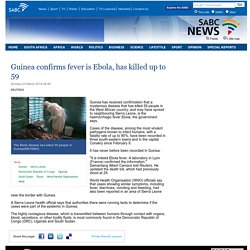 Cases of the disease, among the most virulent pathogens known to infect humans, with a fatality rate of up to 90%, have been recorded in three south-eastern towns and in the capital Conakry since February 9. It has never before been recorded in Guinea. "It is indeed Ebola fever. A laboratory in Lyon (France) confirmed the information," Damantang Albert Camara told Reuters. World Health Organisation (WHO) officials say that cases showing similar symptoms, including fever, diarrhoea, vomiting and bleeding, had also been reported in an area of Sierra Leone near the border with Guinea.

A Sierra Leone health official says that authorities there were running tests to determine if the cases were part of the epidemic in Guinea. Kenya ill-prepared to deal with Ebola outbreak: KMA:Thursday 14 August 2014. Kenyan Medics distanced themselves from their government reports indicating that Kenya is well prepared to deal with the ebola virus. 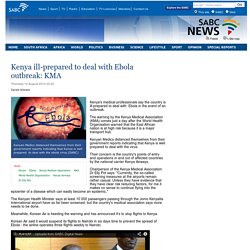 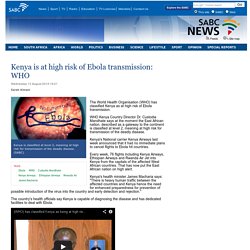 (SABC) The World Health Organisation (WHO) has classified Kenya as at high risk of Ebola transmission. WHO Kenya Country Director Dr. Custodia Mandhate says at the moment the East African nation, described as a gateway to the continent is classified at level 2, meaning at high risk for transmission of the deadly disease. Kenya's National carrier Kenya Airways last week announced that it had no immediate plans to cancel flights to Ebola hit countries. Every week, 76 flights including Kenya Airways, Ethiopian Airways and Rwanda Air Jet into Kenya from the capitals of the affected West African countries. Kenya's health minister James Macharia says: "There is heavy human traffic between the affected countries and Kenya hence the need for enhanced preparedness for prevention of possible introduction of the virus into the country and early detection and rejection. " Millions set aside for possible Ebola outbreak:Friday 10 October 2014.

The Ebola virus causes fever, vomiting and diarrhoea and sometimes internal bleeding, and is spread through direct contact with body fluids. 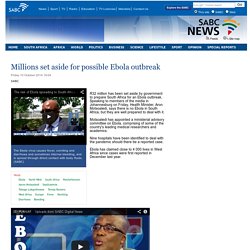 (SABC) R32 million has been set aside by government to prepare South Africa for an Ebola outbreak. Speaking to members of the media in Johannesburg on Friday, Health Minister, Aron Motsoaledi, says there is no Ebola in South Africa, but they are well prepared to deal with it. Motsoaledi has appointed a ministerial advisory committee on Ebola, comprising of some of the country's leading medical researchers and academics. Nine hospitals have been identified to deal with the pandemic should there be a reported case. Ebola has claimed close to 4 000 lives in West Africa since cases were first reported in December last year. Meanwhile, a 72 year old man from the North West who was suspected of having Ebola has died. The North West Health department says he was admitted with a high fever and cough and was feeling weak. 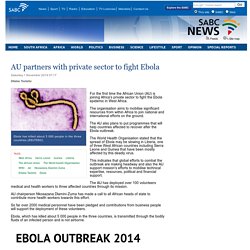 (REUTERS) For the first time the African Union (AU) is joining Africa's private sector to fight the Ebola epidemic in West Africa. The organisation aims to mobilise significant resources from within Africa to join national and international efforts on the ground. The AU also plans to put programmes that will help countries affected to recover after the Ebola outbreak. The World Health Organisation stated that the spread of Ebola may be slowing in Liberia, one of three West African countries including Sierra Leone and Guinea that have been mostly affected by this deadly virus. This indicates that global efforts to combat the outbreak are making headway and also the AU support mission's efforts to mobilise technical expertise, resources, political and financial support.

The AU has deployed over 100 volunteers medical and health workers to three affected countries through its mission. Ebola horrible and unforgiving: WHO:Tuesday 14 October 2014. The WHO says at the moment it's sitting at 1 000 new Ebola cases a week(REUTERS) The World Health Organisation (WHO) on Tuesday held a virtual press briefing on the Ebola outbreak, with work focused in three intensely affected West African countries. 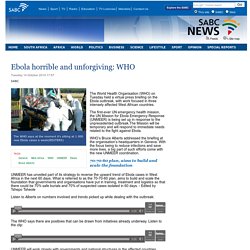 The first-ever UN emergency health mission, the UN Mission for Ebola Emergency Response (UNMEER) is being set up in response to the unprecedented outbreak.The Mission will be temporary and will respond to immediate needs related to the fight against Ebola. WHO’s Bruce Alberts addressed the briefing at the organisation’s headquarters in Geneva. With the focus being to reduce infections and save more lives, a big part of such efforts come with the new UNMEER coordination. 70-70-60 plan, aims to build and scale the foundation. The causes of Ebola and the symptoms. Dr Kgosi Letlape on ebola and how does one contract it. Ebola outbreak crippling the economies of the affected countries.