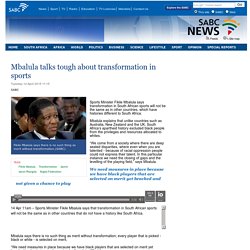 (SABC) Sports Minister Fikile Mbalula says transformation in South African sports will not be the same as in other countries, which have histories different to South Africa. Mbalula explains that unlike countries such as Australia, New Zealand and the UK, South Africa’s apartheid history excluded black people from the privileges and resources allocated to whites. Tough calls for transformation in the Boks:Tuesday 11 August 2015. Springbok coach Heyneke Meyer is under pressure to transform his non-performing team ahead of the world cup. 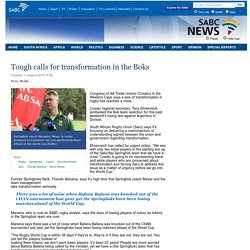 (SABC) Congress of SA Trade Unions (Cosatu) in the Western Cape says a lack of transformation in rugby has reached a crisis. Cosatu regional secretary, Tony Ehrenreich, lambasted the Bok team selection for this past weekend's losing test against Argentina in Durban. South African Rugby Union (Saru) says it's focusing on delivering a memorandum of understanding signed between the union and government regarding transformation. Ehrenreich has called for urgent action, “We see with only two black players in the starting line up of the Saturday Springbok team that we have a crisis. Former Springboks flank, Thando Manana, says it’s high time that Springbok coach Meyer and the team management take transformation seriously. There was a lot of noise when Bafana Bafana was knocked out of the CHAN tournament last year yet the Springboks have been losing matches ahead of the World Cup. Cosatu pleased with Bok squad :Friday 28 August 2015. Cosatu says the Springbok squad for the IRB World Cup 2015 is the most representative by far. 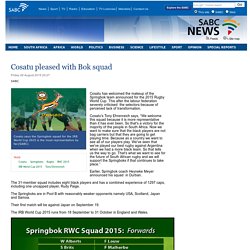 (SABC) Cosatu has welcomed the makeup of the Springbok team announced for the 2015 Rugby World Cup. This after the labour federation severely criticised the selectors because of perceived lack of transformation. FF Plus takes rugby squad grievance to British high commissioner:Monday 31 August 2015. Last week Springbok coach named his transformed 31-man squad to represent the country in England for the World Cup(SABC) The Freedom Front Plus (FF Plus) says government's interference in the selection of the national rugby team has a negative impact on individual players. 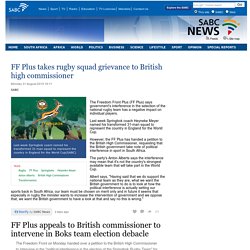 Last week Springbok coach Heyneke Meyer named his transformed 31-man squad to represent the country in England for the World Cup. However, the FF Plus has handed a petition to the British High Commissioner, requesting that the British government take note of political interference in sport in South Africa. The party's Anton Alberts says the interference may mean that it's not the country's strongest available team that will take part in the World Cup. [<a href="//storify.com/sabcnewsonline/social-media-reacts-to-ff-peti" target="_blank" title="">View the story "FF Plus appeals to British commissioner to intervene in Boks team election debacle" on Storify</a>] 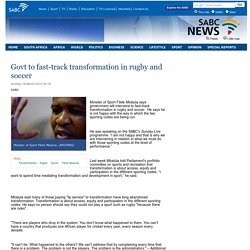 (REUTERS) Minister of Sport Fikile Mbalula says government will intervene to fast-track transformation in rugby and soccer. He says he is not happy with the way in which the two sporting codes are being run. He was speaking on the SABC's Sunday Live programme. “I am not happy and that is why we are intervening in relation to what we must do with those sporting codes at the level of performance.” Last week Mbalula told Parliament's portfolio committee on sports and recreation that transformation is about access, equity and participation in the different sporting codes. Mbalula said many of those paying "lip service" to transformation have long abandoned transformation. "There are players who drop in the system. "It can't be. Govt to fast-track transformation in rugby and soccer:Sunday 18 March 2012. ‘SA rugby needs to change with immediate effect’:Saturday 22 August 2015.

Peter de Villiers was the main speaker at the launch of Supporters Against Racist Rugby Associations. 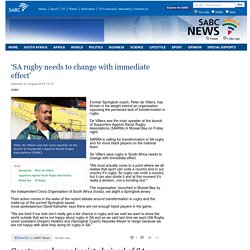 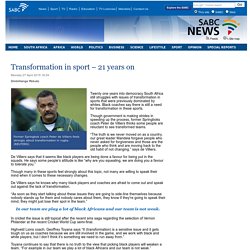 (REUTERS) Twenty one years into democracy South Africa still struggles with issues of transformation in sports that were previously dominated by whites. Black coaches say there is still a need for transformation in these sports. Though government is making strides in speeding up the process, former Springboks coach Peter de Villiers thinks some people are reluctant to see transformed teams. “The truth is we never moved on as a country, our great leader Mandela forgave people who never asked for forgiveness and those are the people who think and are moving back to the old habit of not changing.” says de Villiers. De Villiers says that it seems like black players are being done a favour for being put in the squads. Though many in these sports feel strongly about this topic, not many are willing to speak their mind when it comes to these necessary changes.