Related articles: The spotlight back on Oscar Pistorius

The world is waiting to see if Oscar Pistorius will be released from jail on parole and placed under house arrest. The Parole Board is expected to make a decision. 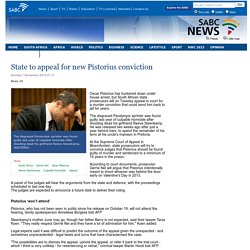 (REUTERS) Oscar Pistorius has hunkered down under house arrest, but South African state prosecutors will on Tuesday appeal in court for a murder conviction that could send him back to jail for years. The disgraced Paralympic sprinter was found guilty last year of culpable homicide after shooting dead his girlfriend Reeva Steenkamp. He was released two weeks ago after just a year behind bars, to spend the remainder of his term at his uncle's mansion in Pretoria. At the Supreme Court of Appeal in Bloemfontein, state prosecutors will try to convince judges that Pistorius should be found guilty of murder and sentenced to a minimum of 15 years in the prison. According to court documents, prosecutor Gerrie Nel will argue that Pistorius intentionally meant to shoot whoever was behind the door early on Valentine's Day in 2013. Law should take its course: Steenkamp family:Friday 9 October 2015. The athlete shot his girlfriend on Valentine's Day in 2013. 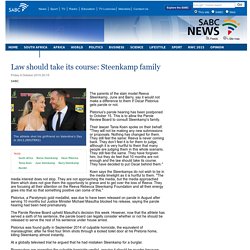 (REUTERS) The parents of the slain model Reeva Steenkamp, June and Barry, say it would not make a difference to them if Oscar Pistorius gets parole or not. Pistorius's parole hearing has been postponed to October 15. This is to allow the Parole Review Board to consult Steenkamp's family. Their lawyer Tania Koen spoke on their behalf. Koen says the Steenkamps do not wish to be in the media limelight as it is hurtful to them. Pistorius, a Paralympic gold medallist, was due to have been released on parole in August after serving 10 months but Justice Minister Michael Masutha blocked his release, saying the parole hearing had been held prematurely.

The Parole Review Board upheld Masutha's decision this week. Pistorius was found guilty in September 2014 of culpable homicide, the equivalent of manslaughter, after he fired four 9mm shots through a locked toilet door at his Pretoria home, killing Steenkamp almost instantly. Pistorius’ fate could lie in the hands of the Steenkamp’s:Friday 9 October 2015. Pistorius awaits parole board decision :Friday 9 October 2015. Jailed paralympian Oscar Pistorius became eligible for parole after serving only 10 months of his 5 year sentence. 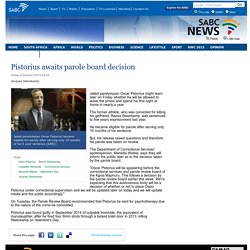 (SABC) Jailed paralympian Oscar Pistorius might learn later on Friday whether he will be allowed to leave the prison and spend his first night at home in nearly a year. The former athlete, who was convicted for killing his girlfriend, Reeva Steenkamp, was sentenced to five years imprisonment last year. He became eligible for parole after serving only 10 months of his sentence. Parole board suggests psychotherapy for Pistorius:Tuesday 6 October 2015. Paralympian Oscar Pistorius was found guilty in September 2014 of culpable homicide following his girlfriend, Reeva Steenkamp’s death. 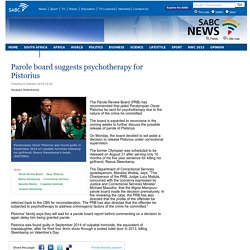 (REUTERS) The Parole Review Board (PRB) has recommended that jailed Paralympian Oscar Pistorius be sent for psychotherapy due to the nature of the crime he committed. The board is expected to reconvene in the coming weeks to further discuss the possible release of parole of Pistorius. On Monday, the board decided to set aside a decision to release Pistorius under correctional supervision. The former Olympian was scheduled to be released on August 21 after serving only 10 months of his five year sentence for killing his girlfriend, Reeva Steenkamp. The Department of Correctional Services spokesperson, Manelisi Wolela, says: "The Chairperson of the PRB, Judge Lucy Mailula, concurred with the concerns expressed by Justice and Correctional Services Minister Michael Masutha, that the Mgosi Mampuru parole board made the decision prematurely.

Pistorius’ family reacts to his parole delay :Tuesday 6 October 2015. Oscar Pistorius was found guilty in September 2014 of culpable homicide, after he fired four 9mm shots through a locked toilet door in 2013 killing his girlfriend Reeva Steenkamp on Valentine's Day. 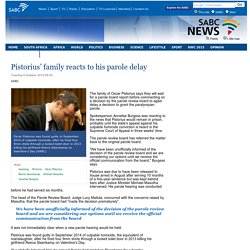 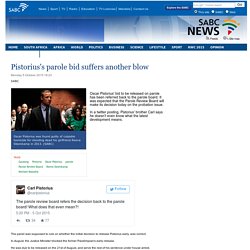 (SABC) Oscar Pistorius' bid to be released on parole has been referred back to the parole board. It was expected that the Parole Review Board will make its decision today on the probation issue. In a twitter posting, Pistorius' brother Carl says he doesn't even know what the latest development means. The panel was supposed to rule on whether the initial decision to release Pistorius early, was correct.

In August, the Justice Minister blocked the former Paralimpian's early release. Pistorius appeal set for November 3:Tuesday 22 September 2015. On October 21, Oscar Pistorius was sentenced to five years in prison for killing Steenkamp, and to three years - suspended for five - for discharging a firearm in a restaurant. 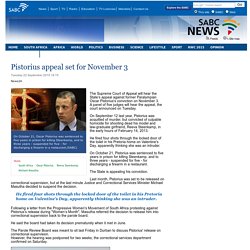 (SABC) The Supreme Court of Appeal will hear the State’s appeal against former Paralympian Oscar Pistorius's conviction on November 3. A panel of five judges will hear the appeal, the court announced on Tuesday. On September 12 last year, Pistorius was acquitted of murder, but convicted of culpable homicide for shooting dead his model and law-graduate girlfriend, Reeva Steenkamp, in the early hours of February 14, 2013.

He fired four shots through the locked door of the toilet in his Pretoria home on Valentine's Day, apparently thinking she was an intruder. On October 21, Pistorius was sentenced to five years in prison for killing Steenkamp, and to three years - suspended for five - for discharging a firearm in a restaurant. More tears for Oscar Pistorius :Monday 14 April 2014. State prosecutor Gerrie Nel has repeatedly accused Oscar Pistorius of tailoring his evidence as he goes along. 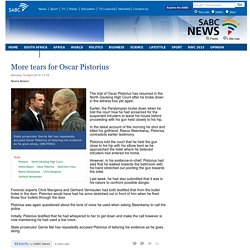 (REUTERS) The trial of Oscar Pistorius has resumed in the North Gauteng High Court after he broke down in the witness box yet again. Earlier, the Paralympian broke down when he told the court how he had screamed for the suspected intruders to leave his house before proceeding with his gun held closely to his hip. In the latest account of the morning he shot and killed his girlfriend, Reeva Steenkamp, Pistorius contradicts earlier testimony. Pistorius told the court that he held the gun close to his hip with his elbow bent as he approached the toilet where he believed intruders had entered his home. However, in his evidence-in-chief, Pistorius had said that he walked towards the bathroom with his hand stretched out pointing the gun towards the toilet. Last week, he had also submitted that it was in his nature to confront possible danger. Why parole for Oscar Pistorius is perfectly legitimate:Tuesday 23 June 2015.

Oscar Pistorius' early release was a virtual certainty from the day he was sentenced. 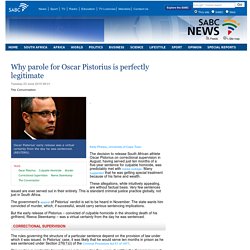 (REUTERS) Kelly Phelps, University of Cape Town The decision to release South African athlete Oscar Pistorius on correctional supervision in August, having served just ten months of a five-year sentence for culpable homicide, was predictably met with media outrage. Many suggested that he was getting special treatment because of his fame and wealth. These allegations, while intuitively appealing, are without factual basis. Oscar Pistoriuss appeal to be heard in November:Monday 8 June 2015. Pistorius could be a free man as soon as August:Monday 11 May 2015. Oscar Pistorius is being kept in the hospital wing of the Kgosi Mampuru II Prison in Pretoria. 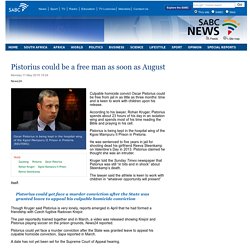 (REUTERS) Culpable homicide convict Oscar Pistorius could be free from jail in as little as three months’ time and is keen to work with children upon his release. According to his lawyer, Rohan Kruger, Pistorius spends about 23 hours of his day in an isolation wing and spends most of his time reading the Bible and praying in his cell. No special treatment for Oscar, Radovan: Dept:Wednesday 11 March 2015.

Pistorius appeal matter struck off the roll:Friday 13 March 2015. Oscar Pistorius shot and killed his girlfriend, Reeva Steenkamp at his Silver Woods Estate home east of Pretoria on Valentine’s Day two years ago, claiming he mistook her for an intruder. (SABC) Judge Thokozile Masipa has struck the Oscar Pistorius appeal matter from the roll. Pistorius' lawyers approached the South Gauteng High Court in Johannesburg to appeal against presiding Judge Thokozile Masipa's ruling that granted the state leave to appeal the former athlete's conviction of culpable homicide.

Pistorius shot and killed his girlfriend, Reeva Steenkamp at his Silver Woods Estate home east of Pretoria on Valentine’s Day two years ago, claiming he mistook her for an intruder. He is now serving a five-year jail term. Nel shares hurdles in preparing for Pistorius trial:Wednesday 4 March 2015. State Prosecutor Gerrie Nel appreciates the broadcasting of the Oscar Pistorius trial. (SABC) State Prosecutor Gerrie Nel has shared some of the legal hurdles he faces in preparing the state's appeal in the Oscar Pistorius trial.

Nel addressed law students at the University of KwaZulu-Natal. The National Prosecuting Authority (NPA) is currently awaiting a possible court date this year. Students packed the venue where Nel was to address third years. The state's lead Prosecutor showed his gentle and humorous side; very different from the man dubbed the "Bull dog” who gave Pistorius a ferocious grilling during his murder trial in 2014. Oscars lawyers file papers against appeal:Tuesday 24 February 2015. Oscar Pistorius was sentenced to five years in jail for the culpable homicide of his girlfriend Reeva Steenkamp. (REUTERS) Convicted paralympian Oscar Pistorius's lawyers will contest the court decision allowing the State to appeal his culpable homicide conviction, his family said on Tuesday.

"We confirm that the defence team has lodged an application for leave to appeal the decision of the court regarding the matters that have been referred to the SCA," family spokesperson Anneliese Burgess said in a statement. "We will argue that these are matters of fact, rather than matters of law. " The application for leave to appeal would be heard on March 13, she said. State granted leave to appeal Pistorius conviction:Wednesday 10 December 2014. Judge Thokozile Masipa ruled that the possibility of another court finding a different conclusion is not remote. Law expert unpacks Pistorius appeal:Tuesday 9 December 2014. Masipa to decide Oscar appeal on Wednesday:Tuesday 9 December 2014.