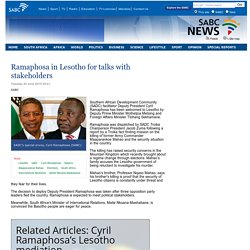 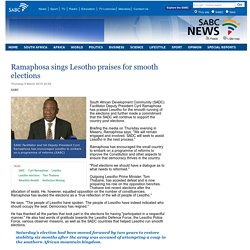 (SABC) South African Development Community (SADC) Facilitator Deputy President Cyril Ramaphosa has praised Lesotho for the smooth running of the elections and further made a commitment that the SADC will continue to support the country post elections. Briefing the media on Thursday evening in Maseru, Ramaphosa says, "We will remain engaged and involved. SADC will seek to assist Lesotho in the next process. " Ramaphosa has encouraged the small country to embark on a programme of reforms to improve the Constitution and other aspects to ensure that democracy thrives in the country. Lesotho to host ceremony to close down the SADC Facilitation Mission:Sunday 29 March 2015.

No outright winner in Lesotho elections:Tuesday 3 March 2015. Lesotho is heading for another coalition government after elections. 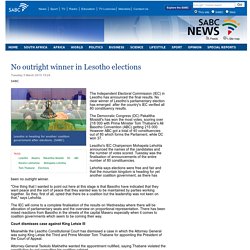 (SABC) The Independent Electoral Commission (IEC) in Lesotho has announced the final results. No clear winner of Lesotho's parliamentary election has emerged after the country's IEC verified all 80 constituency results. The Democratic Congress (DC) Pakalitha Mosisili's has won the most votes, scoring over 218 000 with Prime Minister Tom Thabane's All Basotho Convention (ABC) getting 215 000. However ABC got a total of 40 constituencies out of 80 which forms the Parliament, while DC won 37.

Lesotho's IEC Chairperson Mohapela Lehohla announced the names of the candidates and the number of votes scored. Lehohla says elections were free and fair and that the mountain kingdom is heading for yet another coalition government, as there has been no outright winner. Court dismisses case against King Letsie III Three judges from South Africa heard the case that attracted crowds to the courts a week before the election. Ramaphosa no show in Lesotho sparks disappointment:Friday 6 February 2015. Cyril Ramaphosa was expected to arrive in Lesotho to continue mediation ahead of elections. 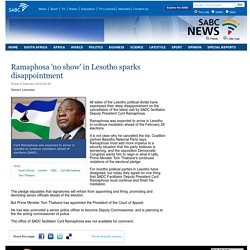 (SABC) All sides of the Lesotho political divide have expressed their deep disappointment on the cancellation of the latest visit by SADC facilitator, Deputy President Cyril Ramaphosa. Ramaphosa was expected to arrive in Lesotho to continue mediation ahead of the February 28 elections. It is not clear why he cancelled the trip. Coalition partner Basotho National Party says Ramaphosa must add more impetus to a security situation that the party believes is worsening, and the opposition Democratic Congress wants him to reign-in what it calls, Prime Minister Tom Thabane's continued violations of the electoral pledge.

For months political parties in Lesotho have disagreed, but today they agree on one thing that SADC Facilitator Deputy President Cyril Ramaphosa must continue and finish his mediation. Lesotho to host ceremony to close down the SADC Facilitation Mission:Sunday 29 March 2015. Ramaphosa hails Lesotho officers departure:Saturday 22 November 2014. SADC facilitator, Cyril Ramaphosa, is overseeing developments in Lesotho(REUTERS) The departure of three senior Lesotho police and army officers from the country was welcomed by SA Development Community (SADC) facilitator and Deputy President Cyril Ramaphosa on Saturday. 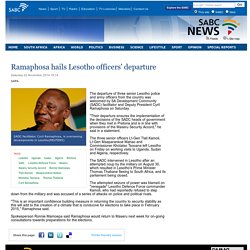 "Their departure ensures the implementation of the decisions of the SADC heads of government when they met in Pretoria and is in line with provisions of the Maseru Security Accord," he said in a statement. The three senior officers Lt-Gen Tlali Kamoli, Lt-Gen Maaparankoe Mahao and Commissioner Khotatso Tsooana left Lesotho on Friday on working visits to Uganda, Sudan and Algeria, respectively. The SADC intervened in Lesotho after an attempted coup by the military on August 30, which resulted in Lesotho's Prime Minister Thomas Thabane fleeing to South Africa, and its parliament being closed. 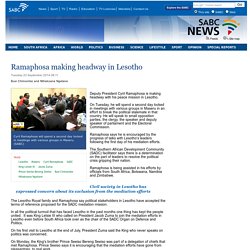 (SABC) Deputy President Cyril Ramaphosa is making headway with his peace mission in Lesotho. On Tuesday, he will spend a second day locked in meetings with various groups in Maseru in an effort to break the political stalemate in that country. He will speak to small opposition parties, the clergy, the speaker and deputy speaker of parliament and the Electoral Commission.