Police brutality has to be dealt with: SAHRC:Friday 24 January 2014. Four people died during a protest over water in Mothutlung near Brits last week. 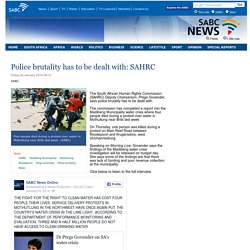 (SABC) The South African Human Rights Commission (SAHRC) Deputy Chairperson, Pregs Govender, says police brutality has to be dealt with. The commission has completed a report into the Madibeng Municipality water crisis where four people died during a protest over water in Mothutlung near Brits last week. On Thursday, one person was killed during a protest on Main Reef Road between Roodepoort and Krugersdorp, west ofJohannesburg. Speaking on Morning Live, Govender says the findings of the Madibeng water crisis investigation will be released on budget day. Click below to listen to the full interview. Police brutality must be contextualised:Friday 24 January 2014. Last week, two people were shot dead by police in a water protest in Mothutlung, Pretoria. 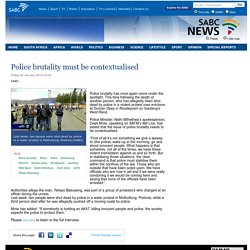 (SABC) Police brutality has once again come under the spotlight. This time following the death of another person, who has allegedly been shot dead by police in a violent protest over evictions at Durban Deep in Roodepoort on Gauteng's West Rand. Police Minister, Nathi Mthethwa’s spokesperson, Zweli Mnisi, speaking on SAFM’s AM Live, has stated that the issue of police brutality needs to be contextualised. “First of all it’s not something we give a leeway to (the police) wake-up in the morning, go and shoot innocent people. Mthethwa, Phiyega address media on Mothutlung:Friday 24 January 2014. Mothutlung police officers will be disciplined: Mthetwa:Friday 24 January 2014. Police Minister Nathi Mthetwa and Police Commissioner Riah Phiyega addressing a media conference in Pretoria. 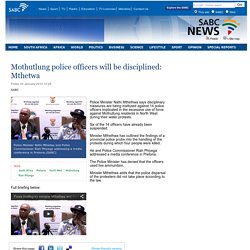 (SABC) Police Minister Nathi Mthethwa says disciplinary measures are being instituted against 14 police officers implicated in the excessive use of force against Mothutlung residents in North West during their water protests. Six of the 14 officers have already been suspended. Minister Mthethwa has outlined the findings of a provincial police probe into the handling of the protests during which four people were killed. He and Police Commissioner Riah Phiyega addressed a media conference in Pretoria. Fourth person dies after Mothutlung water protest:Monday 20 January 2014. The community is demanding access to water. 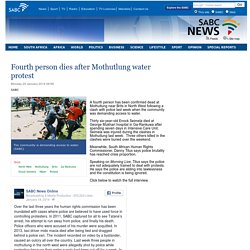 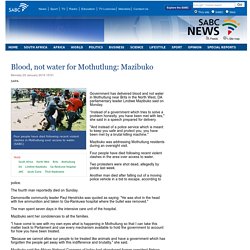 (SABC) Government has delivered blood and not water in Mothutlung near Brits in the North West, DA parliamentary leader Lindiwe Mazibuko said on Monday. “Instead of a government which tries to solve a problem honestly, you have been met with lies," she said in a speech prepared for delivery. "And instead of a police service which is meant to keep you safe and protect you, you have been met by a brutal killing machine. " Mazibuko was addressing Mothutlung residents during an oversight visit. Four people have died following recent violent clashes in the area over access to water. Two protesters were shot dead, allegedly by police last week. Another man died after falling out of a moving police vehicle in a bid to escape, according to police. The fourth man reportedly died on Sunday. The man spent seven days in the intensive care unit of the hospital. 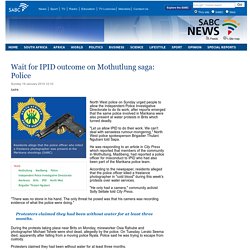 (SABC) North West police on Sunday urged people to allow the Independent Police Investigative Directorate to do its work, after reports emerged that the same police involved in Marikana were also present at water protests in Brits which turned deadly. "Let us allow IPID to do their work. We can't deal with senseless rumour-mongering," North West police spokesperson Brigadier Thulani Ngubani told Sapa. He was responding to an article in City Press which reported that members of the community in Mothutlung, Madibeng, had reported a police officer for misconduct to IPID who had also been part of the Marikana police team. According to the newspaper, residents alleged that the police officer killed a freelance photographer in "cold blood" during this week's protests over water services.

"He only had a camera," community activist Solly Setlale told City Press. Mothutlung water protest victims funeral underway:Saturday 18 January 2014. Michael Stephens Tshele was shot and killed during a clash between police and residents demanding uninterrupted water supply to the township. 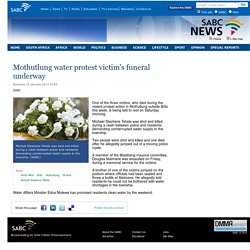 (SABC) One of the three victims, who died during the violent protest action in Mothutlung outside Brits this week, is being laid to rest on Saturday morning. Michael Stephens Tshele was shot and killed during a clash between police and residents demanding uninterrupted water supply to the township. Two people were shot and killed and one died after he allegedly jumped out of a moving police nyala. A member of the Madibeng mayoral committee, Douglas Maimane was assaulted on Friday, during a memorial service for the victims. Mothutlung community urged not to waste water:Saturday 18 January 2014. The Mothutlung community took to the streets this week demanding uninterrupted water supply. 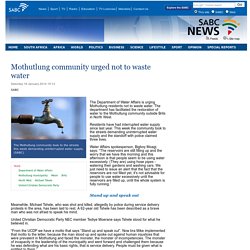 (SABC) The Department of Water Affairs is urging Mothutlung residents not to waste water. The department has facilitated the restoration of water to the Mothutlung community outside Brits in North West. Residents have had interrupted water supply since last year. This week the community took to the streets demanding uninterrupted water supply and the standoff with police claimed three lives. Water Affairs spokesperson, Bigboy Moagi, says: “The reservoirs are still filling up and the worry that we have this morning and this afternoon is that people seem to be using water excessively. Stand up and speak out Meanwhile, Michael Tshele, who was shot and killed, allegedly by police during service delivery protests in the area, has been laid to rest. 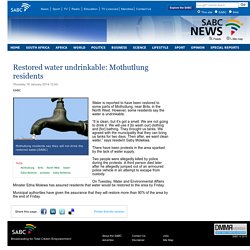 (SABC) Water is reported to have been restored to some parts of Mothutlung, near Brits, in the North West. However, some residents say the water is undrinkable. “It is clean, but it’s got a smell. We are not going to drink it. Police Minister urged to act speedily following Mothutlung shootings:Thursday 16 January 2014. N West Cosatu seeks independent Brits probe:Thursday 16 January 2014. Three people have been killed in Mothutlung since protests over shortage of water started(SABC) Congress of South African Trade Unions (Cosatu) in the North West on Thursday called for an independent investigation into the killing of Mothutlung residents during protests near Brits. 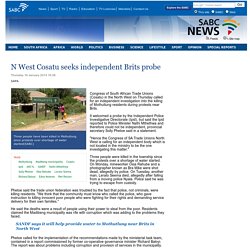 It welcomed a probe by the Independent Police Investigative Directorate (Ipid), but said the Ipid reported to Police Minister Nathi Mthethwa and therefore could not be independent, provincial secretary Solly Phetoe said in a statement. "Hence the Congress of SA Trade Unions North West is calling for an independent body which is not located in the ministry to be the one investigating this matter. " Three people were killed in the township since the protests over a shortage of water started. On Monday, mineworker Osia Rahube and a photographer known as Bra Mike were shot dead, allegedly by police. Phetoe said the trade union federation was troubled by the fact that police, not criminals, were killing residents.