Unreviewed VPN Providers (I haven't really looked at these yet) 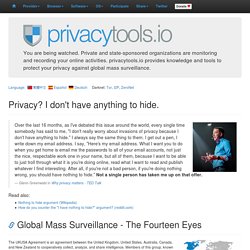 Private and state-sponsored organizations are monitoring and recording your online activities. privacytools.io provides knowledge and tools to protect your privacy against global mass surveillance. Language: 繁體中文 Español Deutsch Darknet: Tor, I2P, ZeroNet Over the last 16 months, as I've debated this issue around the world, every single time somebody has said to me, "I don't really worry about invasions of privacy because I don't have anything to hide. " I always say the same thing to them.

My recomendations based on thatoneprivacysite.net 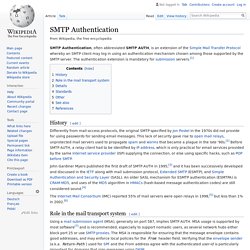 The authentication extension is mandatory for submission servers.[1] History[edit] What is Port 443? Why do SSL VPNs make use of it? - IT Answers. TrafficObfuscation – OpenVPN Community. Sometimes it's useful to obfuscate the fact that your traffic is generated by OpenVPN. 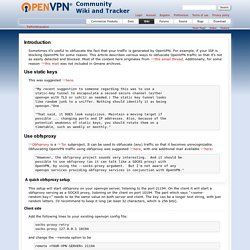 For example, if your ISP is blocking OpenVPN for some reason. This article describes various ways to obfuscate OpenVPN traffic so that it's not as easily detected and blocked. Blowfish (cipher) - Wikipedia. Blowfish is a symmetric-key block cipher, designed in 1993 by Bruce Schneier and included in a large number of cipher suites and encryption products. 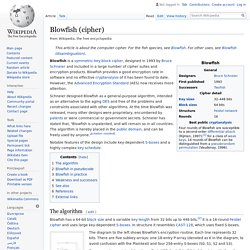 Blowfish provides a good encryption rate in software and no effective cryptanalysis of it has been found to date. However, the Advanced Encryption Standard (AES) now receives more attention. Schneier designed Blowfish as a general-purpose algorithm, intended as an alternative to the aging DES and free of the problems and constraints associated with other algorithms. At the time Blowfish was released, many other designs were proprietary, encumbered by patents or were commercial or government secrets. Schneier has stated that, "Blowfish is unpatented, and will remain so in all countries. Proxy Tools. VPN services.