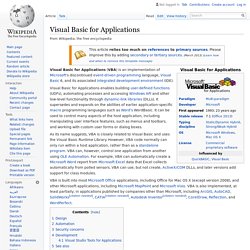 As its name suggests, VBA is closely related to Visual Basic and uses the Visual Basic Runtime Library. However, VBA code normally can only run within a host application, rather than as a standalone program. VBA can, however, control one application from another using OLE Automation. For example, VBA can automatically create a Microsoft Word report from Microsoft Excel data that Excel collects automatically from polled sensors. VBA can use, but not create, ActiveX/COM DLLs, and later versions add support for class modules. Secure your Visual Basic 6.0. What are your choices? 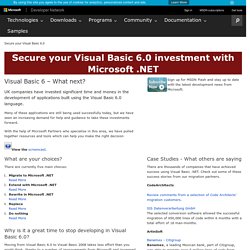 There are currently five main choices: Migrate to Microsoft .NETRead MoreThis involves an automated migration process using the Visual Basic Upgrade Wizard or a third-party tool to move all (or part) of the code to .NET. Visual Basic 6.0 Resource Center. VBA. COM Programming (Windows) Automating Windows. Getting ready for Windows 10 – SDKs, compatibility, bridges. With Windows 10 being released July 29, 2015, we want to update you on some new things and some things you can do to get ready now. 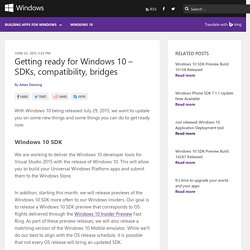 Windows 10 SDK We are working to deliver the Windows 10 developer tools for Visual Studio 2015 with the release of Windows 10. This will allow you to build your Universal Windows Platform apps and submit them to the Windows Store. In addition, starting this month, we will release previews of the Windows 10 SDK more often to our Windows Insiders. Our goal is to release a Windows 10 SDK preview that corresponds to OS flights delivered through the Windows 10 Insider Preview Fast Ring.

When running the latest SDK and emulator in your local development environment, your apps will be able to access the latest Windows capabilities and APIs available in the preview build. As always, you can download the latest Windows SDK and mobile emulator from the Windows 10 Developer Tools page. Windows is committed to compatibility. Visual Basic 6.0 - Superior Code awards (2014 - 2024): VISUAL BASIC wins the technical impact award at The 19th Annual D.I.C.E. Awards (2016)

Developers call for Microsoft to bring back Visual Basic. While Microsoft CEO Satya Nadella forges ahead with a mobile and cloud-first strategy, a growing number of developers are venting their frustration over Visual Basic (VB) support. 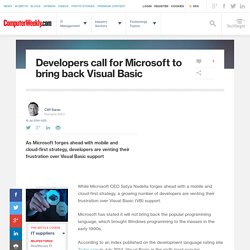 In spite of being 12 years old, Visual Basic.Net ranks six places behind the older VB language it replaces, according to the Tiobe Index. Don't Get Me Started - The Silent Majority: Why Visual Basic 6 Still Thrives. An Open Letter to the Community. Author’s Note: Earlier today, I sent the attached note to each of the MVPs who signed the petition around VB6. 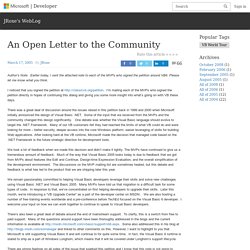 Please let me know what you think. I noticed that you signed the petition at I’m mailing each of the MVPs who signed the petition directly in hopes of continuing this dialog and giving you some more insight into what’s going on with VB these days. There was a great deal of discussion around the issues raised in this petition back in 1999 and 2000 when Microsoft initially announced the design of Visual Basic .NET.

Some of the input that we received from the MVPs and the community changed this design significantly. One debate was whether the Visual Basic language should evolve to target the .NET Framework. We took a lot of feedback when we made this decision and didn’t make it lightly. Where Is the Successor to Visual Basic? The arrival of reasonably priced microcomputers in the late 1970s and early 1980s enabled ordinary folk to actually own, run, and even write their own computer software, albeit in a scaled-down and less leading-edge manner than what computer scientists, university students, and professional programmers were doing with their giant mainframes and super minicomputers. 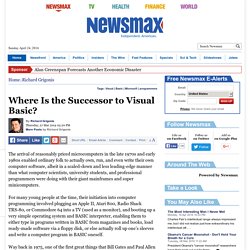 For many young people at the time, their initiation into computer programming involved plugging an Apple II, Atari 800, Radio Shack TRS-80, or Commodore 64 into a TV (used as a monitor), and booting up a very simple operating system and BASIC interpreter, enabling them to either type in programs written in BASIC from magazines and books, load ready-made software via a floppy disk, or else actually roll up one’s sleeves and write a computer program in BASIC oneself. Abandoning the Fantasy of VB Migration Wizardry. Or all the functional enhancements that .NET brings to a developer's world and the excitement one might be feeling about putting these advances into practice, the truth is that this is not exactly a golden age for Visual Basic 6 developers. 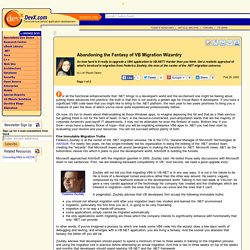 If you have a significant VB6 code base that you might like to bring to the .NET platform, the next year to two years promises to bring you a measure of pain the likes of which you've never quite experienced professionally before. Oh sure, it's fun to dream about Web-enabling all those Windows apps, to imagine deploying this bit and that as a Web service, but getting there is not for the faint of heart. In fact, in the resource-constrained, post-amputation wards that are the majority of corporate America's post-layoff IT departments, it may not be attainable for even the flintiest of souls. Five Immutable Migration TruthsFederico Zoufaly is at the center of the .NET migration universe. Support Statement for Visual Basic 6.0 on Windows Vista, Windows Server 2008, Windows 7, Windows 8 and Windows 8.1, Windows Server 2012, and Windows 10.

Visual Basic 6 Renewed to Run on Windows 8. Visual basic, vb, vbscript, Visual Basic 6.0: A giant more powerful than ever. Introduction Released on the market in mid 1998, Visual Basic 6.0 (abbreviated VB6) has been and it still is the most successful version in the history of Visual Basic. 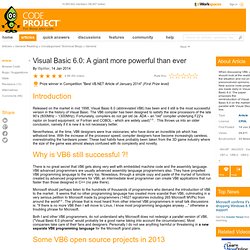 The VB6 compiler has been designed to satisfy the slow processors of the late 90’s (800MHz – 1300MHz). Fortunately, compilers do not get old (ie. ADA – an "old" compiler underlying F22's raptor on board equipment, or Fortran and COBOL - which are widely used)1-3 . This throws us into an older conclusion, namely if it is new it is not necessary better. Nevertheless, at the time, VB6 designers were true visionaries, who have done an incredible job which has withstood time. Why is VB6 still successful ?! There is no great secret that VB6 gets along very well with embedded machine code and the assembly language. Microsoft should perhaps listen to the hundreds of thousands of programmers who demand the introduction of VB6 to the market . Some VB6 open source projects in 2013 Description: 08 JAN 2014 UPDATE. PRB: Round Function different in VBA 6 and Excel Spreadsheet. 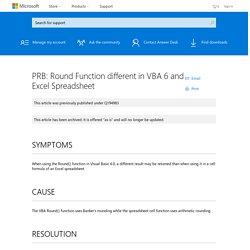