Ukraine. Canadian Photojournalist Captures Quiet Moments Amid the Conflict in Ukraine. A dog serves as a diversion for Ukrainian soldiers during a three-hour standoff with Russian troops at a military base in Crimea. 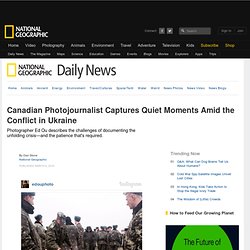 Two weeks into the crisis in Ukraine, tension between Russian and Ukrainian soldiers continues to build. Russian President Vladimir Putin insisted in a televised address Tuesday that his decision to send 16,000 Russian troops to the Crimean region of Ukraine would not result in an international war. Russia and Crimea, he said, were brothers in arms. Ukraine. Ukraine, Through the US Looking Glass. Pro-Russian militants drive an armored personnel carrier near the administrative building in Slovyansk, Ukraine, April 16, 2014. 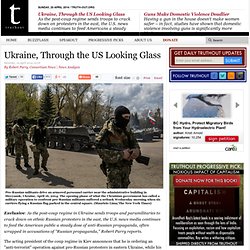 The opening phase of what the Ukrainian government has called a military operation to confront pro-Russian militants suffered a setback Wednesday morning when six carriers flying a Russian flag parked in the central square. (Mauricio Lima/The New York Times) Exclusive: As the post-coup regime in Ukraine sends troops and paramilitaries to crack down on ethnic Russian protesters in the east, the U.S. news media continues to feed the American public a steady dose of anti-Russian propaganda, often wrapped in accusations of "Russian propaganda," Robert Parry reports.

On Tuesday, Andriy Parubiy, head of the Ukrainian National Security Council, went on Twitter to declare, "Reserve unit of National Guard formed #Maidan Self-defense volunteers was sent to the front line this morning. " Whose Propaganda? 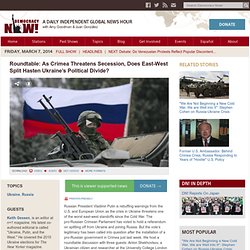 Copy may not be in its final form. JUAN GONZÁLEZ: The pro-Russian Crimean Parliament has voted to hold a referendum on splitting off from Ukraine and joining Russia. Shane Smith - Klitschko Bumbayai. World Heavyweight Boxing Champ Vitali Klitschko is Leading the Opposition Party in Ukraine. Dear Ukrainians! 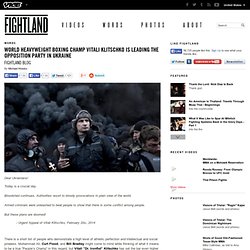 Today is a crucial day. Bloodshed continues. Authorities resort to bloody provocations in plain view of the world. Armed criminals were unleashed to beat people to show that there is some conflict among people. But these plans are doomed! - Urgent Appeal of Vitali Klitschko, February 20th, 2014 There is a short list of people who demonstrate a high level of athletic perfection and intellectual and social prowess. While remaining active as a professional boxer, the dominant heavyweight, and Ph.D., has been a political activist for the past decade. 15 terrifying images which show that Kiev is a real warzone. Ukraine: One "Regime Change" Too Many? AlterNet - The developments are still chilling. Why the Crisis in Ukraine Isn't the Start of a New Cold War.

JANUARY 23, 2014: Anti-government protest in Kiev, Grushevsky str. People defend barricades.Photo Credit: Photobank gallery / Shutterstock.com March 2, 2014 | Like this article? Join our email list: Stay up to date with the latest headlines via email. Police Descend on Kiev Protest Camp After a Deadly Day of Demonstrations. On Tuesday evening in Kiev, police moved in on an anti-government protest camp in the center of the city.

The police forces, some armed with water canons and stun grenades, issued an ominous warning for women and children to leave, the AFP reported. 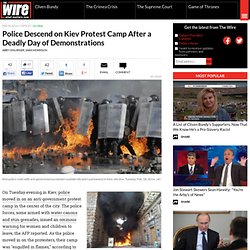 DN! A Coup or a Revolution? Ukraine Seeks Arrest of Ousted President Following Deadly Street Protests. AMY GOODMAN: Ukraine is in a state of crisis two days after the country’s democratically elected president was ousted following months of street protests that left at least 82 people dead. 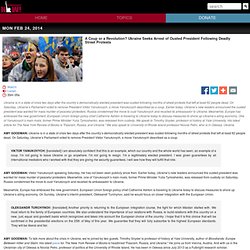 On Saturday, Ukraine’s Parliament voted to remove President Viktor Yanukovych, a move Yanukovych described as a coup. VIKTOR YANUKOVYCH: [translated] I am absolutely confident that this is an example, which our country and the whole world has seen, an example of a coup. I’m not going to leave Ukraine or go anywhere. I’m not going to resign. I’m a legitimately elected president. AMY GOODMAN: Viktor Yanukovych speaking Saturday. Meanwhile, Europe has embraced the new government. OLEKSANDR TURCHYNOV: [translated] Another priority is returning to the European integration course, the fight for which Maidan started with. Ukraine police storm Kiev protest camp – live updates.

With clashes between anti-government protesters still ongoing in the centre of Kiev, here’s a summary of developments over the course of today: • Ukrainian riot police charged protesters occupying a central Kiev square early on Wednesday after the bloodiest day in the country’s post Soviet history.Police battled their way into Independence Square, centre of three months of protests against President Viktor Yanukovich, but demonstrators, some armed with clubs and wearing helmets and body armour, tried to stand their ground. • At least 14 protesters and seven policemen were killed during the violence that erupted in Kiev on Tuesday and continued into the early hours of Wednesday. 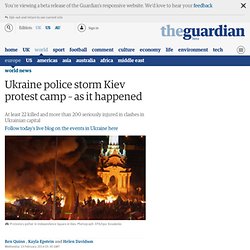 Many were killed by gunshot and hundreds more injured, with dozens of them in a serious condition, police and opposition representatives said. • Western governments demanded restraint and dialogue. New Fascist government. Meanwhile, More Russian Military Vehicles Amass In The Crimean. While the IMF is promising a massive bailout to the Ukraine, and NATO is using the harshest language it can possibly muster to halt Russia in its tracks, Putin is doing what he does best: employing brute force (as seen below), and using even harsher language, to wit: RUSSIA: WEST MUST STOP MAKING PROVOCATIVE STATEMENTS ON UKRAINE. 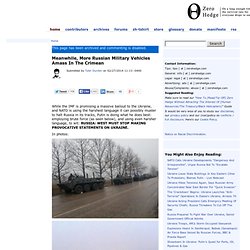 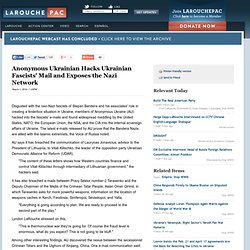 The Rebirth Of American Nazism. MintPress takes a look at Nazis in America, asking, “Who are they?” 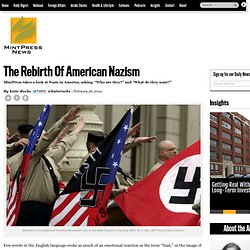 And “What do they want?” Members of the National Socialist Movement rally at the state Capitol in Lansing, Mich. for a rally. (AP Photo/Carlos Osorio) Ukrainians, take it from a Bosnian: the EU flag is just a rag in the wind. Jorge Luis Borges once said that a true gentleman is interested in lost causes only. If you're looking for a decent contemporary lost cause, you will surely find it in Ukraine, since if it comes to war, no matter who wins, most of the ordinary people will be losers.

We, the citizens of Bosnia, can tell you a thing or two about being losers. It was April 1992, during the start of Sarajevo's siege. I was a long-haired teenager, dressed in blue jeans and a shirt with the famous black and white "Unknown Pleasures" print. From the window of my suburban flat, I was watching the Yugoslav People Army's cannons, located in the Lukavica army camp, firing projectiles on Sarajevo.

The National Radio was broadcasting Bosnian president Alija Izetbegović's discussion with Yugoslav army general Milutin Kukanjac. Ukrainian Neo-Nazis Declare that Power Comes Out of the Barrels of their Guns. Reality on the ground in Ukraine contradicts the incompetent and immoral Obama regime’s portrait of Ukrainian democracy on the march. To the extent that government exists in post-coup Ukraine, it is laws dictated by gun and threat wielding thugs of the neo-Nazi, Russophobic, ultra-nationalist, right-wing parties. Watch the video of the armed thug, Aleksandr Muzychko, who boosts of killing Russian soldiers in Chechnya, dictating to the Rovno regional parliament a grant of apartments to families of protesters.

Read about the neo-nazis intimidating the Central Election Commission in order to secure rule and personnel changes in order to favor the ultra-right in the forthcoming elections. Thug Aleksandr Shevchenko informed the CEC that armed activists will remain in CEC offices in order to make certain that the election is not rigged against the neo-nazis. What he means, of course, is the armed thugs will make sure the neo-nazis win. This is precisely what has happened. Preparing Ukraine for a Proxy War with Russia. Joe Biden and Barack Obama The BBC reported in their article, “Ukraine crisis: Biden to meet Kiev leaders in show of support,” that: US Vice-President Joe Biden is to meet Ukraine’s new leaders in a show of support for the pro-Western government.Mr Biden is due to discuss the forthcoming elections with the country’s interim prime minister and president during his visit to Kiev.A phone conversation between the US secretary of state and Russia’s foreign minister earlier led to both sides blaming the other over the crisis.

Biden’s visit is not the first time Western representatives have traveled to Kiev in direct support of the “Euromaidan” protests and the subsequent unelected regime that violently seized power. US Senator John McCain would literally take the stage with the ultra-right, Neo-Nazi Svoboda Party leaders as well as meet with “Fatherland Party” member and future “prime minister,” Arseniy Yatsenyuk. In mid-April, CIA director John Brennan was confirmed to have travelled to Kiev. Russia Today Anchor Speaks Out Against Invasion Of Ukraine: 'What Russia Did Is Wrong'

Rudy Giuliani: Unlike Obama, Putin is “what you call a leader” While most of Vladimir Putin’s right-wing fans have come from the socially conservative wing of the GOP, it would be wrong to say the Russian autocrat doesn’t have some crossover appeal for today’s Republicans. Case in point: Rudy Giuliani, former mayor of New York City and well-known moderate on some social issues, counts himself as a fan — or at the very least sounds like one.

Appearing on Neil Cavuto’s Fox News show, Giuliani shared his thoughts on Russia’s invasion and de facto annexation of the Ukrainian province. Rather than blasting Putin for ignoring international law, the sovereignty of an independent neighboring country, and the rights of Ukrainians to decide their country’s future for themselves, Giuliani praised Putin for being what he called “a leader.” Cavuto then awkwardly interrupted, noting that Putin’s move was “perfunctory” since Russia’s parliament is essentially a dummy rubber-stamp for the Putin regime. “[H]e makes a decision and he executes it, quickly. Specter of Civil War; Putin's Army Hiding – Not Even CNN Can Find It; Easy Solution. Today the government of Ukraine moved with force against the separatists, evoking a Specter of Civil War.

Ukraine unleashed an offensive to dislodge militants from towns in its eastern Donetsk region as the authorities in Kiev said elements of Russian special forces were identified among the anti-government forces.Four militants were killed and two wounded when Ukrainian troops stormed an airport in Kramatorsk, taking it under control, Russia’s state-run RIA Novosti news service reported. Ukrainian units backed by armored personnel carriers blocked all approaches to the town of Slovyansk, RIA said, citing an a pro-Russian activist, Sergey Tsyplakov. Part of Russia’s 45th Airborne Regiment was spotted in both of the towns, Ukrainian First Deputy Prime Minister Vitali Yarema said on Channel 5. The U.S. and EU states say Russia is behind the turmoil that has fueled their worst standoff since the Cold War. The Ukraine crisis: John Kerry and Nato must calm down and back off.

Both John Kerry's threats to expel Russia from the G8 and the Ukrainian government's plea for Nato aid mark a dangerous escalation of a crisis that can easily be contained if cool heads prevail. My Blog. Ukraine 2013/14.