Clear-air turbulence, wikipedia. Clear-air turbulence (CAT) is the turbulent movement of air masses in the absence of any visual cues such as clouds, and is caused when bodies of air moving at widely different speeds meet.[1] The atmospheric region most susceptible to CAT is the high troposphere at altitudes of around 7,000–12,000 metres (23,000–39,000 ft) as it meets the tropopause. 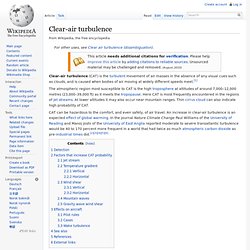 Here CAT is most frequently encountered in the regions of jet streams. At lower altitudes it may also occur near mountain ranges. Thin cirrus cloud can also indicate high probability of CAT. CAT can be hazardous to the comfort, and even safety, of air travel. Detection[edit] Clear-air turbulence is usually impossible to detect with the naked eye and very difficult to detect with conventional radar,[7] with the result that it is difficult for aircraft pilots to detect and avoid it.

Factors that increase CAT probability[edit] Jet stream[edit] Rossby waves caused by this jet stream shear and the Coriolis force cause it to meander. Laminar-turbulent transition, wikipedia. The plume from an ordinary candle transitions from laminar to turbulent flow in this Schlieren photograph. 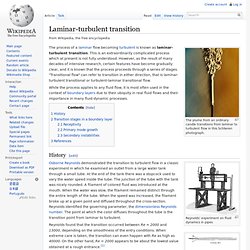 The process of a laminar flow becoming turbulent is known as laminar-turbulent transition. This is an extraordinarily complicated process which at present is not fully understood. However, as the result of many decades of intensive research, certain features have become gradually clear, and it is known that the process proceeds through a series of stages. "Transitional flow" can refer to transition in either direction, that is laminar-turbulent transitional or turbulent-laminar transitional flow. While the process applies to any fluid flow, it is most often used in the context of boundary layers due to their ubiquity in real fluid flows and their importance in many fluid-dynamic processes. 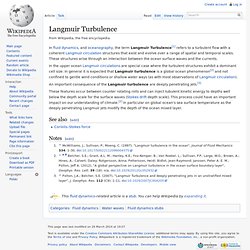 These structures arise through an interaction between the ocean surface waves and the currents. In the upper ocean Langmuir circulations are special case where the turbulent structures exhibit a dominant cell size. In general it is expected that Langmuir turbulence is a global ocean phenomenon[2] and not confined to gentle wind conditions or shallow water ways (as with most observations of Langmuir circulation). An important consequence of the Langmuir turbulence are deeply penetrating jets.[3] These features occur between counter rotating rolls and can inject tubulent kinetic energy to depths well below the depth scale for the surface waves (Stokes drift depth scale). See also[edit] Coriolis–Stokes force. Landau–Hopf theory of turbulence, wikipedia. In physics, the Landau–Hopf theory of turbulence, named for Lev Landau and Eberhard Hopf, was until the mid-1970s the accepted theory of how a fluid flow becomes turbulent. 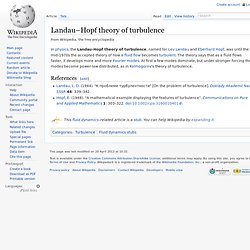 The theory says that as a fluid flows faster, it develops more and more Fourier modes. At first a few modes dominate, but under stronger forcing the modes become power-law distributed, as in Kolmogorov's theory of turbulence. Landau, L. D. (1944). Magnetohydrodynamic turbulence, wikipedia. Magnetohydrodynamics (MHD) deals with what is a quasi-neutral fluid with very high conductivity. 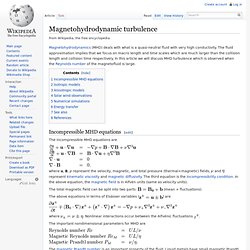 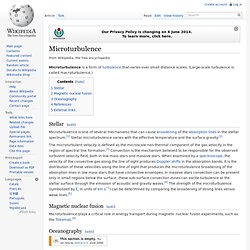 (Large-scale turbulence is called macroturbulence.) Stellar[edit] Microturbulence is one of several mechanisms that can cause broadening of the absorption lines in the stellar spectrum.[1] Stellar microturbulence varies with the effective temperature and the surface gravity.[2] Magnetic nuclear fusion[edit] Microturbulence plays a critical role in energy transport during magnetic nuclear fusion experiments, such as the Tokamak.[6] Oceanography[edit] References[edit] Jump up ^ De Jager, C. (1954). External links[edit] Landstreet, J. Turbulence kinetic energy, wikipedia. In Reynolds-averaged Navier Stokes equations, the turbulence kinetic energy can be calculated based on the closure method, i.e. a turbulence model. 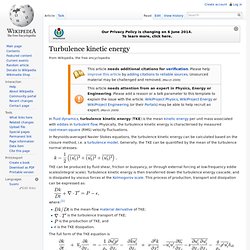 Generally, the TKE can be quantified by the mean of the turbulence normal stresses: TKE can be produced by fluid shear, friction or buoyancy, or through external forcing at low-frequency eddie scales(integral scale). Turbulence kinetic energy is then transferred down the turbulence energy cascade, and is dissipated by viscous forces at the Kolmogorov scale. This process of production, transport and dissipation can be expressed as: where:[1] Turbulence modeling, wikipedia. Turbulence modeling is the construction and use of a model to predict the effects of turbulence. 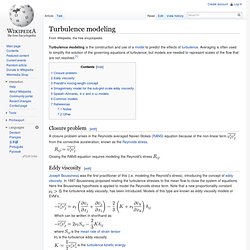 Averaging is often used to simplify the solution of the governing equations of turbulence, but models are needed to represent scales of the flow that are not resolved.[1] Closure problem[edit] Kolmogorov's Turbulence. Mixing length model.

Vortex. Quantum turbulence, wikipedia. Quantum turbulence is the name given to the turbulent flow – the chaotic motion of a fluid at high flow rates – of quantum fluids, such as superfluids which have been cooled to temperatures close to absolute zero. 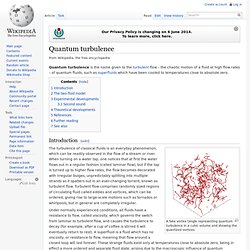 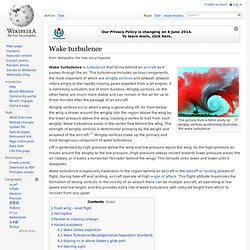 Wake turbulence is turbulence that forms behind an aircraft as it passes through the air. This turbulence includes various components, the most important of which are wingtip vortices and jetwash. Jetwash refers simply to the rapidly moving gases expelled from a jet engine; it is extremely turbulent, but of short duration. Wingtip vortices, on the other hand, are much more stable and can remain in the air for up to three minutes after the passage of an aircraft. Wingtip vortices occur when a wing is generating lift. Lift is generated by high pressure below the wing and low pressure above the wing. Wave turbulence, wikipedia. When wave amplitudes are small (which usually means that the wave is far from breaking) only those waves exist that are directly excited by an external source.

When, however, wave amplitudes are not very small (for surface waves when the fluid surface is inclined by more than few degrees) waves with different frequencies start to interact. That leads to an excitation of waves with frequencies and wavelengths in wide intervals, not necessarily in resonance with an external source. It can be observed in the experiments with a high amplitude of shaking that initially the waves appear which are in resonance, then both longer and shorter waves appear as a result of wave interaction. Category:Turbulence, wikipidia. Ch7. Chap8. Lctr-notes634. INTRODUCTORYLECTURES on TURBULENCEPhysics, Mathematics and ModelingJ. M. McDonough. Turbulence, wikipedia. Flow visualization of a turbulent jet, made by laser-induced fluorescence. The jet exhibits a wide range of length scales, an important characteristic of turbulent flows.

Laminar and turbulent water flow over the hull of a submarine In fluid dynamics, turbulence or turbulent flow is a flow regime characterized by chaotic property changes. This includes low momentum diffusion, high momentum convection, and rapid variation of pressure and flow velocity in space and time.