Bret Weinstein and Yuri Deigin: Did Covid-19 leak From a Lab? Controversial Coronavirus Lab Origin Claims Dismissed By Experts. June 8: This article has been substantially updated to reflect criticism of the published study, along with the general scientific consensus on Covid-19. 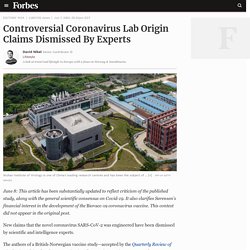 It also clarifies Sørensen’s financial interest in the development of the Biovacc-19 coronavirus vaccine. This context did not appear in the original post.

Coronavirus may have been a 'cell-culture experiment' gone wrong. Coverup - Lab accident theory - COVID-19. The CDC shut down an Army lab that’s working on an Ebola vaccine. An Army lab that houses Ebola virus and other infectious diseases has been shutdown due to violations found in June by the Centers for Disease Control and Prevention, a CDC spokeswoman confirmed to Army Times on Thursday. 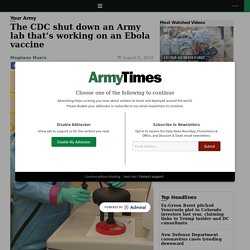 But officials say there were no associated health risks. The U.S. Army Medical Research of Institute of Infectious Diseases at Fort Detrick, Maryland, is at a standstill until the violations are fixed and it is re-instated with the Federal Select Agents Program, which allowed it to handle dangerous biological specimens. “CDC can confirm FSAP has suspended USAMRIID’s registration with the Federal Select Agent Program until USAMRIID corrects deficiencies that have been identified by FSAP,” Sharon Hopkins said. Hoskins did not provide further details of the lab’s compliance issues.

The lab’s suspension began July 18, according to a USAMRIID spokeswoman. Army germ research lab in Md. that was working on Ebola treatment is shut down by CDC. FREDERICK, Md. 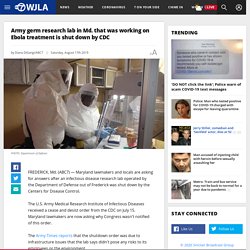 (ABC7) — Maryland lawmakers and locals are asking for answers after an infectious disease research lab operated by the Department of Defense out of Frederick was shut down by the Centers for Disease Control. The U.S. Army Medical Research Institute of Infectious Diseases received a cease and desist order from the CDC on July 15. Maryland lawmakers are now asking why Congress wasn't notified of this order. The Army Times reports that the shutdown order was due to infrastructure issues that the lab says didn't pose any risks to its employees or the environment. Some of USAMRIID's recent work had been on an experimental Ebola vaccine, which they say had successfully protected monkeys from the virus. The last update the lab published on this work was released on March 28, when USAMRIID announced the FDA had approved a drug candidate for Ebola treatment in humans that was based off of the monkey trials. Senators Chris Van Hollen (D-Md.) and Ben Cardin (D-Md.), along with Rep. 1.

Army germ lab shut down by CDC in 2019 had several 'serious' protocol violations that year. FREDERICK, Md. — In 2019, an Army laboratory at Fort Detrick that studies deadly infectious material like Ebola and smallpox was shut down for a period of time after a CDC inspection, with many projects being temporarily halted. 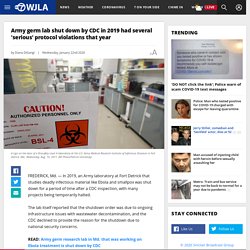 The lab itself reported that the shutdown order was due to ongoing infrastructure issues with wastewater decontamination, and the CDC declined to provide the reason for the shutdown due to national security concerns. READ: Army germ research lab in Md. that was working on Ebola treatment is shut down by CDC ABC7 has received documents from the CDC outlining violations they discovered during a series of inspections that year, some of which were labeled "serious. " Earlier that year, the US Army Medical Research Institute had announced an experiment at the Fort Detrick laboratory that would involve infecting rhesus macaque monkeys with active Ebola virus to test a cure they were developing. 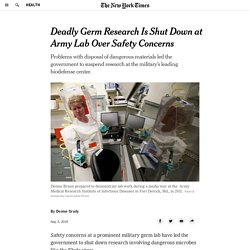 “Research is currently on hold,” the United States Army Medical Research Institute of Infectious Diseases, in Fort Detrick, Md., said in a statement on Friday. The shutdown is likely to last months, Caree Vander Linden, a spokeswoman, said in an interview. The statement said the Centers for Disease Control and Prevention decided to issue a “cease and desist order” last month to halt the research at Fort Detrick because the center did not have “sufficient systems in place to decontaminate wastewater” from its highest-security labs. But there has been no threat to public health, no injuries to employees and no leaks of dangerous material outside the laboratory, Ms. Vander Linden said. 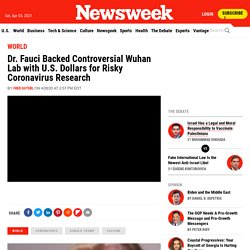 Anthony Fauci is an adviser to President Donald Trump and something of an American folk hero for his steady, calm leadership during the pandemic crisis. At least one poll shows that Americans trust Fauci more than Trump on the coronavirus pandemic—and few scientists are portrayed on TV by Brad Pitt. But just last year, the National Institute for Allergy and Infectious Diseases, the organization led by Dr. Fauci, funded scientists at the Wuhan Institute of Virology and other institutions for work on gain-of-function research on bat coronaviruses. In 2019, with the backing of NIAID, the National Institutes of Health committed $3.7 million over six years for research that included some gain-of-function work. Many scientists have criticized gain of function research, which involves manipulating viruses in the lab to explore their potential for infecting humans, because it creates a risk of starting a pandemic from accidental release. Dr. SARS-CoV-2 Viral Culturing at CDC.

==="I bookmarked some info related to the "lab-origin theory" such as: I wouldn't really take it too seriously because it doesn't inform what we should do at this moment and is highly speculative. That said, there are interesting theories should you want to go down this rabit hole. "=== – s243a