Generate SSH Key (Linux) SSH & Displays. How to remotely shut down tahrpup 6.0.5 64 from windows 7? Hi people, I need help, I will try to write as much helpful information as possible and try to keep it short too, home network, one linksys router with dd-wrt, one windows 7 64, one PBO media player, one tahrpup 6.0.5 64, all cat5e hard wire, no wireless tahrpup is been installed to 8gb flash drive, boots up and runs from there Everything works fine, samba running, all machine are able to see each other and send and receive files, win 7 is the main machine with internet connection, I blocked media player and tahrpup internet accesses from the router as I don't need them to have internet connection, the way things work is; I usually send some media to tahrpub and media player grabs those media to play, basically tharpup acts as server or like NAS, (no need to use tahrpup for any other purpose, no mouse or keyboard or monitor) 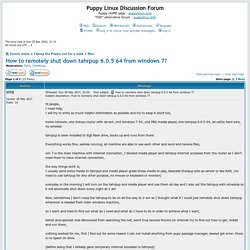 How to remotely shut down tahrpup 6.0.5 64 from windows 7? "Problem Solved" Update So after almost a week being busy and not being able to get back to this, finally I got some time, so thanks to "s243a" for giving me those links, I could not get or do a lot with all those scripts and configuration and also did not know what to do with the SSH.Zip but I did read everything and I went to those links and one thing led to another, from site to site and eventually I found my way to this site: There I followed the instruction and installed: "telnet_0.17-36build2_amd64.deb" And noticed for some reason even it tells me everything installed correctly but I could not find any ".conf" file anywhere so I kind of thought this is not right and not having the ".conf" file I was not able to do exactly the site was suggesting because the next step was that I had to edit the telnet conf file and do this: 2.Edit /etc/inetd.conf using your favorite file editor with root permission,add this line: 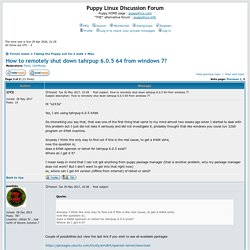 Connect to Open SSH in Fatdog64. Is enabling su a security risk?...rhetorical question. On criticism that puppylinux gets regarding security is that everything runs as root. 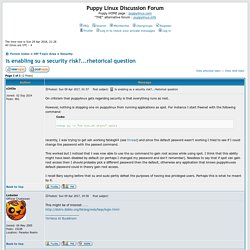 However, nothing is stopping one on puppylinux from running applications as spot. For instance I start freenet with the following command: recently, I was trying to get ssh working fatdog64 (see thread) and since the default pasword wasn't working I tried to see if I could change the password with the passwd command. This worked but I noticed that I was now able to use the su command to gain root access while using spot. I think that this ability might have been disabled by default (or perhaps I changed my password and don't remember). I recall Bary saying before that su and sudo partly defeat the purposes of having less privileged users. Connect to Open SSH in Fatdog64. 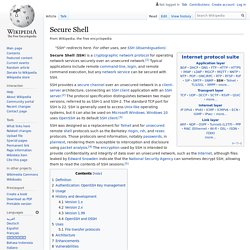 SSH provides a secure channel over an unsecured network in a client–server architecture, connecting an SSH client application with an SSH server.[2] The protocol specification distinguishes between two major versions, referred to as SSH-1 and SSH-2. The standard TCP port for SSH is 22. SSH is generally used to access Unix-like operating systems, but it can also be used on Microsoft Windows. Windows 10 uses OpenSSH as its default SSH client.[3] SSH was designed as a replacement for Telnet and for unsecured remote shell protocols such as the Berkeley rlogin, rsh, and rexec protocols.

Definition[edit] Secure Shell - archwiki. Secure Shell (SSH) is a network protocol that allows data to be exchanged over a secure channel between two computers. 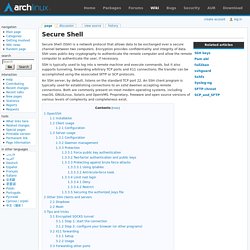 Encryption provides confidentiality and integrity of data. SSH uses public-key cryptography to authenticate the remote computer and allow the remote computer to authenticate the user, if necessary. SSH is typically used to log into a remote machine and execute commands, but it also supports tunneling, forwarding arbitrary TCP ports and X11 connections; file transfer can be accomplished using the associated SFTP or SCP protocols.

An SSH server, by default, listens on the standard TCP port 22. An SSH client program is typically used for establishing connections to an sshd daemon accepting remote connections. OpenSSH. Ubuntu Linux: Start / Stop / Restart OpenSSH ( SSH ) Server. I need to provide a remote access to my Ubuntu Linux based server. 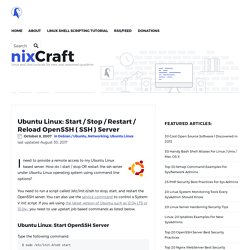 How do I start / stop OR restart the ssh server under Ubuntu Linux operating system using command line options? You need to run a script called /etc/init.d/ssh to stop, start, and restart the OpenSSH server. You can also use the service command to control a System V init script. If you are using the latest version of Ubuntu such as 12.04 LTS or 13.04+, you need to use upstart job based commands as listed below. Command line - Can you set passwords in .ssh/config to allow automatic login?

Sshpass: Login To SSH Server / Provide SSH Password Using A Shell Script. This website is using a security service to protect itself from online attacks. 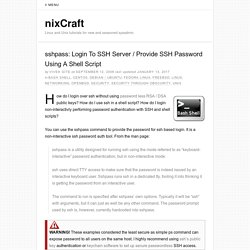 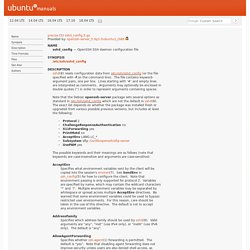 The file contains keyword- argument pairs, one per line. Lines starting with ‘#’ and empty lines are interpreted as comments. Sshd(8) command-line arguments and configuration file options that specify time may be expressed using a sequence of the form: time[qualifier], where time is a positive integer value and qualifier is one of the following: ⟨none⟩ seconds s | S seconds m | M minutes h | H hours d | D days w | W weeks Each member of the sequence is added together to calculate the total time value. 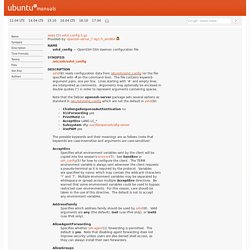 The file contains keyword- argument pairs, one per line. Lines starting with ‘#’ and empty lines are interpreted as comments. Sshd(8) command-line arguments and configuration file options that specify time may be expressed using a sequence of the form: time[qualifier], where time is a positive integer value and qualifier is one of the following: ⟨none⟩ seconds s | S seconds m | M minutes h | H hours d | D days w | W weeks Each member of the sequence is added together to calculate the total time value. Arguments to some keywords can make use of tokens, which are expanded at runtime: %% A literal ‘%’. SSH/OpenSSH/Configuring. Parent page: Internet and Networking >> SSH Once you have installed an OpenSSH server, 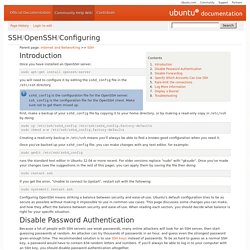 Gmc. Remoting Puppy Linux with Xming and puTTY. As expected (or unexpected, depending on how you see it) - the answer is it depends. There are some operations which is faster under Xming, and vice versa. For example I can watch movie using gxine (albeit powerpoint-style) in Xming, while by vnc - nothing at all. Main menu from IceWm moves smoother in Xming, while rox window dragging is smoother in vnc.

So yes, it depends. Another point to make: With vncserver, the screen is persistent. SSH. Ssh. SSH/OpenSSH/Configuring. Parent page: Internet and Networking >> SSH Once you have installed an OpenSSH server, What is the password for ``ssh root@localhost``? How do I change my password in Linux? Ssh access denied putty. OK. I think I am getting the picture. You can use putty-keygen to generate keys. Then load in the private key. An openssh compatible public key will be printed on the top of the dialog box.

Copy it and paste it into a file. If you are a regular user on the server, then this would be in $HOME/.ssh/authorized_keys. You haven't posted the sshd_config file but apparently it is configured for public key authentication. SSH to Ubuntu "Access Denied" - [Solved] - Open Source Software. [SOLVED] Access Denied message after Putty login - CentOS. Hi, Password · Cydia. View topic - Fatdog64-700/701 [April 22 2015] [CLOSED] For some time now in Fatdog I occasionally get some weird behaviour with my drive names. It happens in FD630/631/700/701. Every now and then when Fatdog boots it displays unexpected drive names. For example I have three internal drives, one blue-ray burner and a further USB drive.