F2 propagation. The E layer of the ionosphere is not the only layer that can reflect VHF television signals. 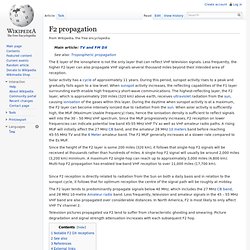 Less frequently, the higher F2 layer can also propagate VHF signals several thousand miles beyond their intended area of reception. Solar activity has a cycle of approximately 11 years. During this period, sunspot activity rises to a peak and gradually falls again to a low level. When sunspot activity increases, the reflecting capabilities of the F1 layer surrounding earth enable high frequency short-wave communications. The highest-reflecting layer, the F2 layer, which is approximately 200 miles (320 km) above earth, receives ultraviolet radiation from the sun, causing ionisation of the gases within this layer.

Since the height of the F2 layer is some 200 miles (320 km), it follows that single-hop F2 signals will be received at thousands rather than hundreds of miles. Television pictures propagated via F2 tend to suffer from characteristic ghosting and smearing. TV and FM DX. TV DX and FM DX is the active search for distant radio or television stations received during unusual atmospheric conditions. 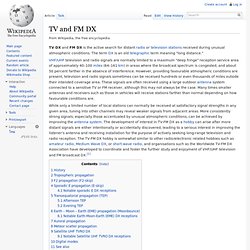 The term DX is an old telegraphic term meaning "long distance. " While only a limited number of local stations can normally be received at satisfactory signal strengths in any given area, tuning into other channels may reveal weaker signals from adjacent areas. More consistently strong signals, especially those accentuated by unusual atmospheric conditions, can be achieved by improving the antenna system. The development of interest in TV-FM DX as a hobby can arise after more distant signals are either intentionally or accidentally discovered, leading to a serious interest in improving the listener's antenna and receiving installation for the purpose of actively seeking long-range television and radio reception. History[edit] The BBC temporarily ceased transmissions on September 1, 1939 as World War II began. Kennelly–Heaviside layer.

Propagation is affected by time of day. 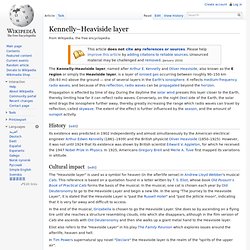 During the daytime the solar wind presses this layer closer to the Earth, thereby limiting how far it can reflect radio waves. Conversely, on the night (lee) side of the Earth, the solar wind drags the ionosphere further away, thereby greatly increasing the range which radio waves can travel by reflection, called skywave. The extent of the effect is further influenced by the season, and the amount of sunspot activity. 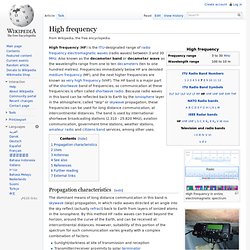 Also known as the decameter band or decameter wave as the wavelengths range from one to ten decameters (ten to one hundred metres). Frequencies immediately below HF are denoted medium frequency (MF), and the next higher frequencies are known as very high frequency (VHF). The HF band is a major part of the shortwave band of frequencies, so communication at these frequencies is often called shortwave radio. Because radio waves in this band can be reflected back to Earth by the ionosphere layer in the atmosphere, called "skip" or skywave propagation, these frequencies can be used for long distance communication, at intercontinental distances. Propagation characteristics[edit] A modern Icom M700Pro two-way radio for marine HF radio communications. Uses[edit] An amateur radio station incorporating two HF transceivers. 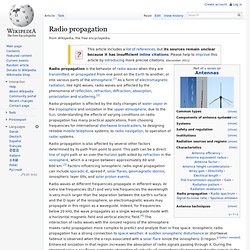 Understanding the effects of varying conditions on radio propagation has many practical applications, from choosing frequencies for international shortwave broadcasters, to designing reliable mobile telephone systems, to radio navigation, to operation of radar systems. Radio propagation is also affected by several other factors determined by its path from point to point. This path can be a direct line of sight path or an over-the-horizon path aided by refraction in the ionosphere, which is a region between approximately 60 and 600 km.[3] Factors influencing ionospheric radio signal propagation can include sporadic-E, spread-F, solar flares, geomagnetic storms, ionospheric layer tilts, and solar proton events. 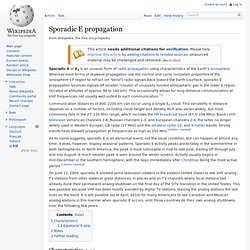 Whereas most forms of skywave propagation use the normal and cyclic ionization properties of the ionosphere's F region to refract (or "bend") radio signals back toward the Earth's surface, sporadic E propagation bounces signals off smaller "clouds" of unusually ionized atmospheric gas in the lower E region (located at altitudes of approx. 90 to 160 km). This occasionally allows for long-distance communication at VHF frequencies not usually well-suited to such communication.[1] Communication distances of 800–2200 km can occur using a single Es cloud.

This variability in distance depends on a number of factors, including cloud height and density. As its name suggests, sporadic E is an abnormal event, not the usual condition, but can happen at almost any time; it does, however, display seasonal patterns.