DNS (Security - Puppylinux) Running as Other Users (Puppylinux) Security & Full Install (Puppylinux) Using a live distro for security-sensitive tasks. That is if I say am at a WiFi, someone might intercept my signal, and then add their computer between me, and wherever I am connecting. 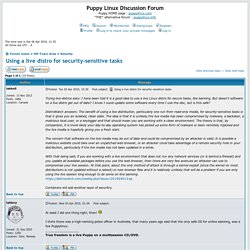 I had read that Firefox addon was used to hack into the movie studio, where they acquired all kinds of personal emails, financial data, and movies which had yet to be released to the public. I dunno. In the case of Banking, could have been used, by a rank amateur to get your login information, watch while you go to your bank account. That is why one might use a VPN. I am not sure what you are doing when you say to to a server. I am not sure whether this kind of addon is always prevented now by Browsers. ?? I do understand your thought of not trusting Tor though. None of what I have said discounts the primary statement that one of the safest ways to contact one's bank, or financial institution is a multi-session Disc. How to manually block advertisements with /etc/hosts. Nice tips linuxcbon. 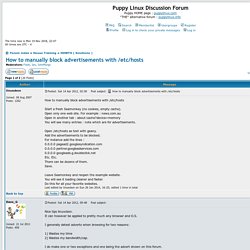 For Mac, I have no idea. and not: 0.0.0.0. Hackers uncork experimental Linux-targeting malware. Firejail. After compiling firejail (very few dependencies) or installing it with .deb binaries, you start browsing with this command line for highest security : I use Firefox, but you can use a number of browsers with firejail. $ firejail --private --dns=8.8.8.8 --dns=8.8.4.4. 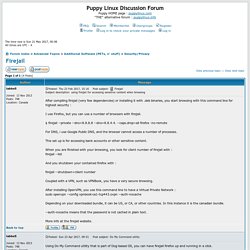 --caps.drop=all firefox -no-remote For DNS, i use Google Public DNS, and the browser cannot access a number of processes. This set up is for accessing bank accounts or other sensitive content. How to put password to puppy? Safe online banking with Puppy? No RAM hack possile? I don't think it is possible to counteract RAM hacks during an online session. 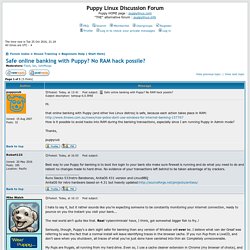 There are too many holes in too many programs, utilities and components of a running Linux system. Most of all, your browser would have to be incredibly tightly locked up - and at the moment we are not at that stage which is why we see continuous efforts to tighten browser security and issue updates. If you can find a browser that is 100% secure, and run it in a sandbox that does not have root privileges, and that is locked with an uncrackable password, and run that sandbox in a system that is able to totally prevent privilege escalation and buffer overflows then you might have a better chance of avoiding online RAM hack.

In other words - no chance yet. If you look at Window's history there is probably no way we will ever get to the point of having a browser, system, and sandbox that is totally secure. CategorySecurity. Security. HomePage > Components and HowTos > Security Security Security includes protection from data loss, data theft and data corruption. 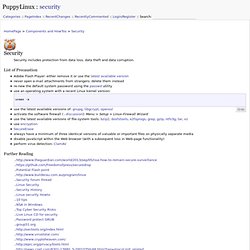 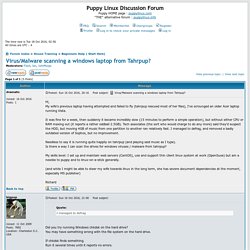 It was fine for a week, then suddenly it became incredibly slow (15 minutes to perform a simple operation), but without either CPU or RAM maxing out (it reports a rather oddball 2.5GB). Tech associates (the sort who would charge to do any more) said they'd suspect the HDD, but moving 4GB of music from one partition to another ran relatively fast. I managed to defrag, and removed a badly outdated version of Sophos, but no improvement. 15 Free Bootable Antivirus Tools (October 2016) Security & Privacy (Puppylinux) Puppy Linux.