Reagan Administration. Sp Wrtr For: Elliott Abrams. Sp Wrtr For: George Shultz. NNDB: Ronald Reagan. Robert Kagan Shot WP BIO. Weakly Standard: Robert Kagan. With Muammar Qaddafi still at large, continued fighting in parts of Libya, and an uncertain future ahead for that country’s long-oppressed people, one hesitates to make too many categorical judgments about the remarkable turn of events there. 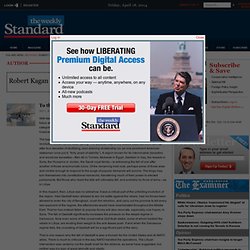 A few things can be said, however. The toppling of Qaddafi’s 42-year dictatorship is a huge victory for the ongoing pan-Arab revolution known as the Arab Spring. The political map of the Middle East has been torn up after four decades of stultifying, soul-draining dictatorship (or, as one prominent American statesman once put it, “forty years of stability”). A region known for its interminable dynasties and would-be dynasties—Ben Ali in Tunisia, Mubarak in Egypt, Saddam in Iraq, the Assads in Syria, the Husseins in Jordan, the Saudi royal family—is witnessing the fall of one after another of those anachronistic icons. WP Profile: Robert Kagan. New Republic: Robert Kagan. Before 2013 begins, catch up on the best of 2012. 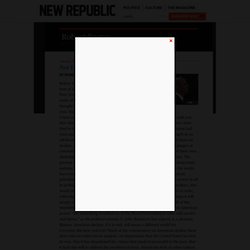 From now until the New Year, we will be re-posting some of The New Republic’s most thought-provoking pieces of the year. Enjoy.Note: At the State of the Union on January 26, President Barack Obama argued, "Anyone who tells you that America is in decline or that our influence has waned, doesn't know what they're talking about. " According to a Foreign Policy report, the president had read and been influenced by the TNR article below, discussing it at length in an off-the-record meeting on the afternoon of the speech. I.Is the United States in decline, as so many seem to believe these days? Or are Americans in danger of committing pre-emptive superpower suicide out of a misplaced fear of their own declining power? 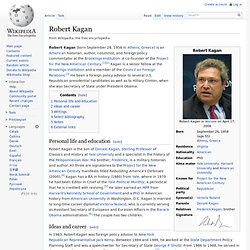 A co-founder of the Project for the New American Century,[1][2] Kagan is a senior fellow at the Brookings Institution and a member of the Council on Foreign Relations.[3] He been a foreign policy advisor to several U.S. Republican presidential candidates as well as to Hillary Clinton, when she was Secretary of State under President Obama. Personal life and education[edit] Robert Kagan is the son of Donald Kagan, Sterling Professor of Classics and History at Yale University and a specialist in the history of the Peloponnesian War. His brother, Frederick, is a military historian and author. Ideas and career[edit] I can recall, their biggest point of contention was whether Plato was just kidding in The Republic. Iraq War critic Andrew Bacevich described Kagan someone who: Writings[edit] Select bibliography[edit] Notes[edit] Adviser: Jack Kemp. Of Paradise and Power. Of Paradise and Power: America and Europe in the New World Order is an essay by Robert Kagan which attempts to explicate the differing approaches that the United States and the nations of Europe take towards the conduct of foreign policy. 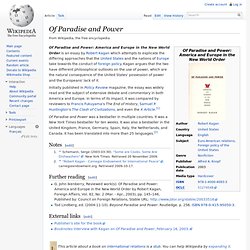 Kagan argues that the two have different philosophical outlooks on the use of power, which are the natural consequence of the United States' possession of power and the Europeans' lack of it. Initially published in Policy Review magazine, the essay was widely read and the subject of extensive debate and commentary in both America and Europe. In terms of its impact, it was compared by reviewers to Francis Fukuyama's The End of History, Samuel P. 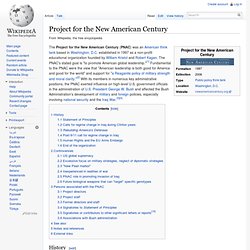 The PNAC's stated goal is "to promote American global leadership. "[1] Fundamental to the PNAC were the view that "American leadership is both good for America and good for the world" and support for "a Reaganite policy of military strength and moral clarity. "[2] With its members in numerous key administrative positions, the PNAC exerted influence on high-level U.S. government officials in the administration of U.S.

History[edit] Statement of Principles[edit] PNAC's first public act was releasing a "Statement of Principles" on June 3, 1997, which was signed by both its members and a variety of other notable conservative politicians and journalists (see Signatories to Statement of Principles). Calls for regime change in Iraq during Clinton years[edit] Rebuilding America's Defenses[edit] Counsil on Forien Relations. Scull & Bones Society. US Committee on NATO. Committee for the Liberation of Iraq. Carnegie Endowment for International Peace. Henry Jackson Society. Project for New American Century Co-founder.