Use the builtin remaster script without your distro's actual iso or cd. Sometimes one only wants to make a remaster of the base sfs. 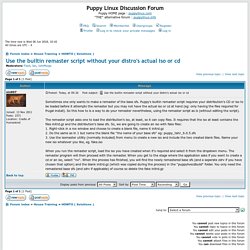 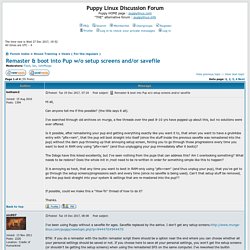 I don't think it is possible, since Puppy by design wants a pupsave file or folder to operate properly. There may be a possibility by altering the "PUPMODE", but this is a bit above my pay grade. I would suggest reading BarryK's doc about PUPMODEs to learn more. Another possibility would be to discover which script triggers the config panel(s) to show at 1st boot and "dummify" it. In all likeliness, this means back-tracking BarryK's logic starting from script /usr/bin/xwin. As a workaround, until one finds the needle in the haystack, I would suggest creating a smallish (a size of 16Mb should be enough) pupsave file containing minimal essential configurations for you or the person for whom you are preparing this remaster. I know, you wished to exclude that possibility... IHTH nevertheless. Copyrighted builtin scripts. Coders to experiment/edit builtin remasterscript. 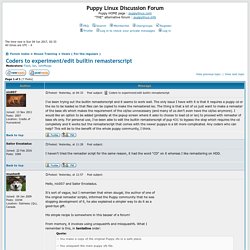 It's sort of vague, but I remember that when dougal, the author of one of the original remaster scripts, informed the Puppy community that he was stopping development of it, he also explained a simpler way to do it as a good-bye gift. His simple recipe Is somewhere in this bazaar of a forum! From memory, it involves using unsquashfs and mksquashfs. What I remember is this, in tentative order:* (I think we have a thread in this forum about "best compression with mksquasfs command and nic007, you contributed to it?) The nice thing about this technique is that you don't have to worry at all about the CD/iso part of remastering -- as requested by nic007 in his OP. Anyway, there goes. Also I remember that BK had a couple of recent useful tips for this procedure as well. Simple Remaster.

Remaster puppy deleted everything on my drive. Nic007, good advice. 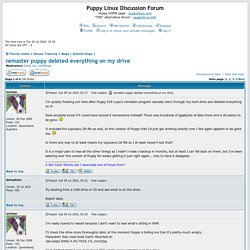 Unfortunately I compile a lot of programs and experiment with a lot and make my Puppy very customised. I guess I should create a special Puplet of my own and that would save me having to spend weeks getting it right again. Sylvander, very interesting. I hadn't thought of these possibilities. I'll try TestDisk next week after I've backed up the partition. I've used PhotoRec before to help other people who had screwed their NTFS drives. My biggest problem is that many of the files I want to recover don't have metadata and many more rely upon the directory structure to give them meaning. This is a good lesson for me. Perhaps something good can come out of this...

Yet another basic remaster script for frugal install. Remastering. HomePage > Components and HowTos > Configure Remastering Remaster Puppy with your customizations and defaults. 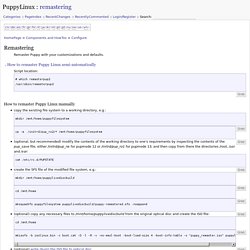