Islam. Buddhism. Criticism of relegion. Spirituality and such. Relegion in society. Atheism. s243a.wikispaces relegion.institutions.Social_Forces.society.s243a. Economic Mythology. Ying-yang in Christianity. Freemasonry. Myths. Taoism. Enlightenment. Tantra. Chakras. Chakras & Kundalini. Meditation ("New Age") Judaism. Christianity Theory & History. Lucifer. Religion. Devil in popular culture. Theophilus of Adana. Saint Theophilus the Penitent or Theophilus of Adana (died ca. 538) was a cleric in the sixth century Church who is said to have made a deal with the Devil to gain an ecclesiastical position. 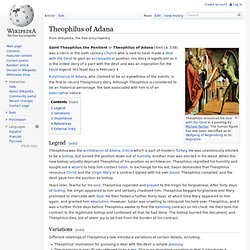 His story is significant as it is the oldest story of a pact with the devil and was an inspiration for the Faust legend. His feast day is February 4. Eutychianus of Adana, who claimed to be an eyewitness of the events, is the first to record Theophilus's story. Although Theophilus is considered to be an historical personage, the tale associated with him is of an apocryphal nature. Legend[edit] Paradise Lost. The poem concerns the Biblical story of the Fall of Man: the temptation of Adam and Eve by the fallen angel Satan and their expulsion from the Garden of Eden. 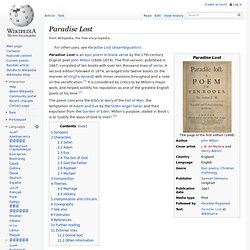 Milton's purpose, stated in Book I, is to "justify the ways of God to men".[5] Synopsis[edit] The poem is separated into twelve "books" or sections, the lengths of which vary greatly (the longest is Book IX, with 1,189 lines, and the shortest Book VII, with 640). The Arguments at the head of each book were added in subsequent imprints of the first edition. Goethe's Faust.

Sculptural depiction of Mephistopheles bewitching the students in the scene Auerbachs Keller from Faust at the entrance of today's pub Auerbachs Keller in Leipzig Goethe completed a preliminary version of Part One in 1806. 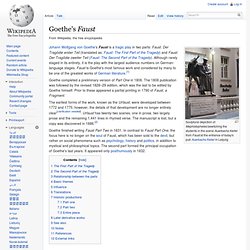 The 1808 publication was followed by the revised 1828–29 edition, which was the last to be edited by Goethe himself. Prior to these appeared a partial printing in 1790 of Faust, a Fragment. The earliest forms of the work, known as the Urfaust, were developed between 1772 and 1775; however, the details of that development are no longer entirely clear[clarification needed]. The Evolutionary Tree of Religion. THEOLOGY/WORLD RELIGIONS/SYMBOLS. Judaïsm101. Religious Majors. Hinduism. Judaism & Hebrew letters and their meaning. Religions. Religion. Religion-Dogma.