Effect size. Statistical measure of the magnitude of a phenomenon Effect size is an essential component when evaluating the strength of a statistical claim, and it is the first item (magnitude) in the MAGIC criteria. 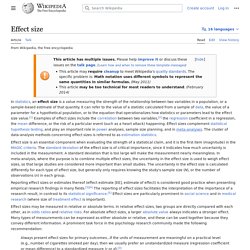 Answering questions with data. One day, many moons ago, William Sealy Gosset got a job working for Guinness Breweries. 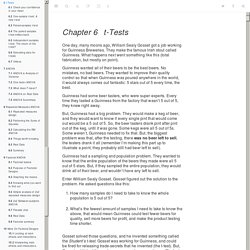 They make the famous Irish stout called Guinness. What happens next went something like this (total fabrication, but mostly on point). Guinness wanted all of their beers to be the best beers. No mistakes, no bad beers. They wanted to improve their quality control so that when Guinness was poured anywhere in the world, it would always comes out fantastic: 5 stars out of 5 every time, the best.

Guinness had some beer tasters, who were super-experts. But, Guinness had a big problem. Guinness had a sampling and population problem. Enter William Sealy Gosset. Gosset solved those questions, and he invented something called the Student’s t-test. It turns out this was a very nice thing for Gosset to have done. t-tests are used all the time, and they are useful, that’s why they are used. 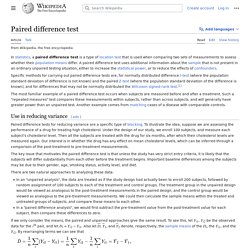 Important baseline differences among the subjects may be due to their gender, age, smoking status, activity level, and diet. There are two natural approaches to analyzing these data: In an "unpaired analysis", the data are treated as if the study design had actually been to enroll 200 subjects, followed by random assignment of 100 subjects to each of the treatment and control groups. And. Wikipedia: Student's t-test. Statistical method. 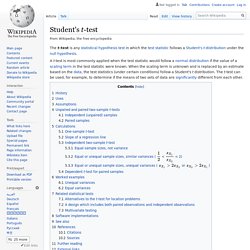 T-statistic. Definition and features[edit] Let be an estimator of parameter β in some statistical model. 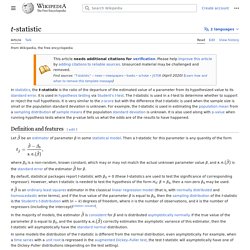 Then a t-statistic for this parameter is any quantity of the form where β0 is a non-random, known constant which may or may not match the actual unknown parameter value β, and for β. By default, statistical packages report t-statistic with β0 = 0 (these t-statistics are used to test the significance of corresponding regressor). If. Incorporating adjustments for variability in control group response rates in network meta-analysis: a case study of biologics for rheumatoid arthritis. Assessment of variability in control group response rates and relationship with treatment effect Inspection of the bar chart in Fig. 2 identifies several variations of note. 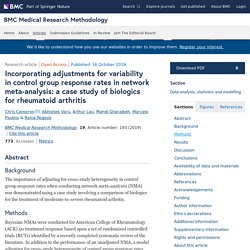 Structure analysis of the receptor binding of 2019-nCoV. 1. 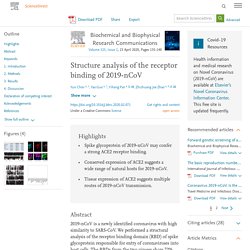 Introduction A mysterious pneumonia illness was first reported in late December 2019 in Wuhan, China, and has rapidly spread to a dozen of countries including the United States with thousands of infected individuals and hundreds of deaths within a month [1]. Scientists in China have isolated the virus from patients and determined its genetic code.