Race to The Bottom

Regulatory economics. Countering, overriding, or bypassing regulation is Regulatory Capture where a regulatory agency created to act in the public interest, instead advances the commercial or special concerns of interest groups that dominate the industry that the agency is charged with regulating. 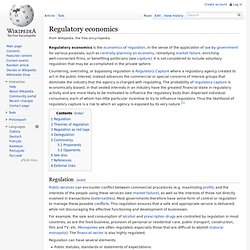 The probability of regulatory capture is economically biased, in that vested interests in an industry have the greatest financial stake in regulatory activity and are more likely to be motivated to influence the regulatory body than dispersed individual consumers, each of whom has little particular incentive to try to influence regulators. Jean-Jacques Laffont. Jean-Jacques Marcel Laffont (April 13, 1947 – May 1, 2004) was a French economist specializing in public economics and information economics. 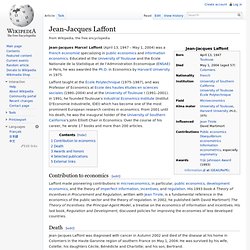 In 1991, he founded Toulouse's Industrial Economics Institute (Institut D'Economie Industrielle, IDEI) which has become one of the most prominent European research centres in economics. Market-based environmental policy instruments. In environmental law and policy, market-based instruments (MBIs) are policy instruments that use markets, price, and other economic variables to provide incentives for polluters to reduce or eliminate negative environmental externalities MBIs seek to address the market failure of externalities (such as pollution) by incorporating the external cost of production or consumption activities through taxes or charges on processes or products, or by creating property rights and facilitating the establishment of a proxy market for the use of environmental services. 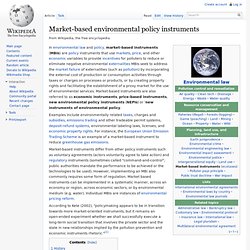 Market-based instruments are also referred to as economic instruments, price-based instruments, new environmental policy instruments (NEPIs) or 'new instruments of environmental policy. History[edit] Transferable permits[edit] When using a transferable-permit system, it is very important to accurately measure the initial problem and also how it changes over time. Price-cap regulation. Price-cap regulation is a form of regulation designed in the 1980s by UK Treasury economist Stephen Littlechild, which has been applied to all of the privatized British network utilities. 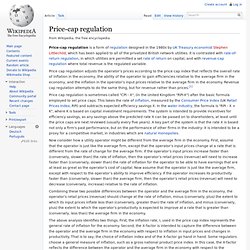 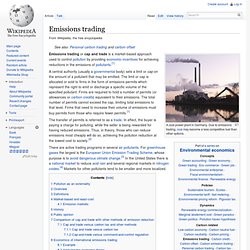 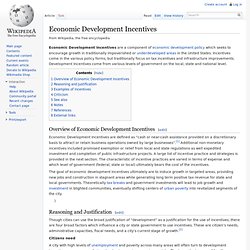 Incentives come in the various policy forms, but traditionally focus on tax incentives and infrastructure improvements. Development Incentives come from various levels of government on the local, state and national level. Overview of Economic Development Incentives[edit] Economic Development Incentives are defined as “cash or near-cash assistance provided on a discretionary basis to attract or retain business operations owned by large businesses”.[1] Additional non-monetary incentives included promised exemption or relief from local and state regulations as well expedited investment and completion of public infrastructure projects. A large list of incentive practice and strategies is provided in the next section. Reasoning and Justification[edit] Citizens need Administrative Capacity Fiscal Need. 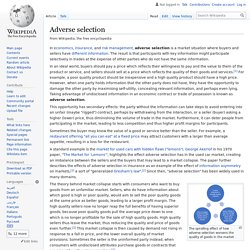 When buyers and sellers have access to different information (asymmetric information), traders with better private information about the quality of a product will selectively participate in trades which benefit them the most (at the expense of the other trader). A textbook example is Akerlof's market for lemons. Buyers sometimes have better information about how much benefit they can extract from a service in which case the "bad" customers are more likely to apply for the service. For example, an all-you-can-eat buffet restaurant which sets one price for all customers risks being adversely selected against by high appetite (and hence least profitable) customers.

Another example is in offering health insurance, the types of customers most likely to apply are those who are most prone to accidents. Public choice. Within the Journal of Economic Literature classification codes, public choice is a subarea of microeconomics, under JEL: D7, Analysis of Collective Decision-Making, and including JEL: D72, Economic Models of Political Processes: Rent-Seeking, Elections, Legislatures, and Voting Behavior.[4] Public choice theory is also closely related to social choice theory, a mathematical approach to aggregation of individual interests, welfares, or votes.[5] Much early work had aspects of both, and both use the tools of economics and game theory. 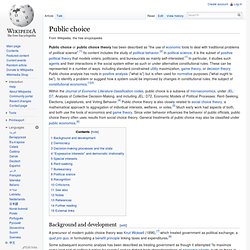 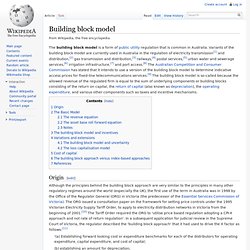 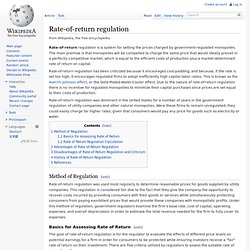 The main premise is that monopolies will be compelled to charge the same price that would ideally prevail in a perfectly competitive market, which is equal to the efficient costs of production plus a market-determined rate of return on capital. Rate-of-return regulation has been criticized because it encourages cost-padding, and because, if the rate is set too high, it encourages regulated firms to adopt inefficiently high capital-labor ratios. Incentives & Regulation.