DN! "The Crazies Are Back": Bush Sr.’s CIA Briefer Discusses How Wolfowitz & Allies Falsely Led the U.S. To War. 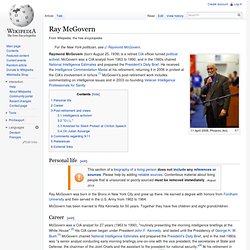 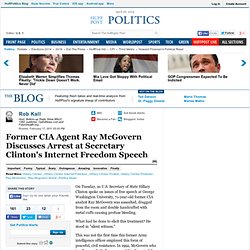 Secretary of State Hillary Clinton spoke on issues of free speech at George Washington University, 71-year-old former CIA analyst Ray McGovern was assaulted, dragged from the room and double handcuffed with metal cuffs causing profuse bleeding. What had he done to elicit this treatment? He stood in "silent witness. " This was not the first time this former Army intelligence officer employed this form of peaceful, civil resistance. In 1992, McGovern who is a Roman Catholic, expressed his dissent of the church's position on women as priests by standing during Sunday Mass in what became a years' long protest. Ray explained that it was in this spirit that he chose to protest Clinton's policies and track record. Hillary is the driving force, together with a few others, behind the wars in Afghanistan. 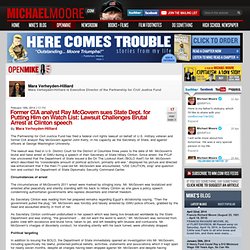 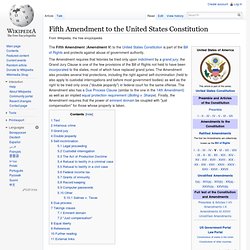 The Amendment requires that felonies be tried only upon indictment by a grand jury; the Grand Jury Clause is one of the few provisions of the Bill of Rights not held to have been incorporated to the states, most of which have replaced grand juries. The Amendment also provides several trial protections, including the right against self-incrimination (held to also apply to custodial interrogations and before most government bodies) as well as the right to be tried only once ("double jeopardy") in federal court for the same offense. 'So This is America': Veteran Ray McGovern Bloodied and Arrested At Clinton Speech.

From the Partnership for Civil Justice: As Secretary of State Hillary Clinton gave her speech at George Washington University yesterday condemning governments that arrest protestors and do not allow free expression, 71-year-old Ray McGovern was grabbed from the audience in plain view of her by police and an unidentified official in plain clothes, brutalized and left bleeding in jail. 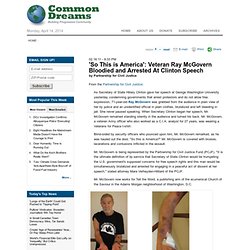 She never paused speaking. When Secretary Clinton began her speech, Mr. McGovern remained standing silently in the audience and turned his back. Ex-CIA Analyst Ray McGovern Beaten, Arrested for Silent Protest at Clinton Speech. This is a rush transcript. 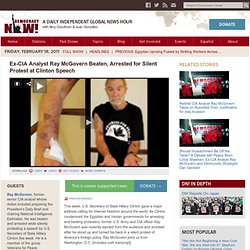 Copy may not be in its final form. JUAN GONZALEZ: On Tuesday, Secretary of State Hillary Clinton gave a major address calling for internet freedom around the world. Speaking at George Washington University, Clinton condemned the Egyptian and Iranian governments for arresting and beating protesters. SECRETARY OF STATE HILLARY CLINTON: What happened in Egypt and what happened in Iran, which this week is once again using violence against protesters seeking basic freedoms, was about a great deal more than the internet. Sam Adams Award. The Sam Adams Award is given annually to an intelligence professional who has taken a stand for integrity and ethics. 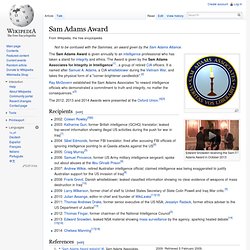 The Award is given by the Sam Adams Associates for Integrity in Intelligence[1] , a group of retired CIA officers. It is named after Samuel A. Adams, a CIA whistleblower during the Vietnam War, and takes the physical form of a "corner-brightener candlestick".[2] Ray McGovern established the Sam Adams Associates "to reward intelligence officials who demonstrated a commitment to truth and integrity, no matter the consequences. The 2012, 2013 and 2014 Awards were presented at the Oxford Union.[4][3] Thomas Fingar. Thomas Fingar Charles Thomas Fingar is a professor at Stanford University. 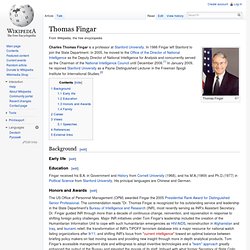 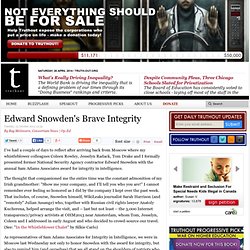 The thought that companioned me the entire time was the constant admonition of my Irish grandmother: "Show me your company, and I'll tell you who you are! " I cannot remember ever feeling so honored as I did by the company I kept over the past week.That includes, of course, Snowden himself, WikiLeaks journalist Sarah Harrison (and "remotely" Julian Assange) who, together with Russian civil rights lawyer Anatoly Kucherena, helped arrange the visit, and – last but not least – the 3,000 Internet transparency/privacy activists at OHM2013 near Amsterdam, whom Tom, Jesselyn, Coleen and I addressed in early August and who decided to crowd-source our travel. Stood on the side of those who refuse to be dogs. Edward Snowden’s Brave Integrity. Exclusive: President Obama says he welcomes the debate on post-9/11 surveillance of Americans and the world, but that debate was only made meaningful by the disclosures of NSA whistleblower Edward Snowden, who was then indicted and sought asylum in Russia, where he just met with some ex-U.S. intelligence officials, including Ray McGovern. 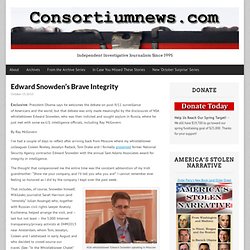 “the paltry privileges granted to those who adapt themselves to this world. The greatness of my country is beyond price. Resistance, Rebellion, and Death by Albert Camus. Commentary: Context And Accuracy: George F. Kennan's Famous "Quotation," by Gilles d'Aymery - ga192. Swans Commentary » March 28, 2005. Dispense with all sentimentality, George F. Kennan's. Thomas Fingar. NSA (Hacker's & Security Experts) Other inside sources.