Impact of Non-Hydrocarbons on the Reservoir Fluids Phase Envelope. Hydrocarbons are frequently produced with non-hydrocarbon impurities. 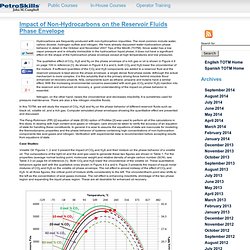 The most common include water, carbon dioxide, hydrogen sulfide and nitrogen. We have already discussed water-hydrocarbon phase behavior in detail in the October and November 2007 Tips of the Month (TOTM). Since water has a low vapor pressure and is virtually immiscible in the hydrocarbon liquid phase, it does not have a significant effect on the shape of the hydrocarbon phase envelope except at high temperatures and low pressures.

The qualitative effect of CO2, H2S and N2 on the phase envelope of a rich gas or oil is shown in Figure 4.9 on page 100 in reference [1]. As shown in Figure 4.9 a and b, both CO2 and H2S lower the cricondenbar of the mixture. Nitrogen, on the other hand, raises the cricondenbar and decreases miscibility. In this TOTM, we will study the impact of CO2, H2S and N2 on the phase behavior of different reservoir fluids such as black oil, volatile oil, and a rich gas. Case Studies: Figure 1. Introduction to Process Calculations Stoichiometry - KA. Gavhane. Reservoir Fluid Types. Typically, there are five main types of reservoir fluids: black oil, volatile oil, condensate (retrograde gas), wet gas, and dry gas. 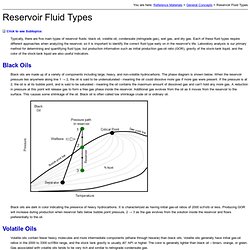 Each of these fluid types require different approaches when analyzing the reservoir, so it is important to identify the correct fluid type early on in the reservoir's life. Laboratory analysis is our primary method for determining and quantifying fluid type, but production information such as initial production gas-oil ratio (GOR), gravity of the stock-tank liquid, and the color of the stock-tank liquid are also useful indicators. PEH:Thermodynamics and Phase Behavior - Relatively few ideas and equations are used to solve the phase behavior problem illustrated in Fig. 7.1. 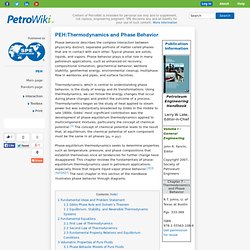 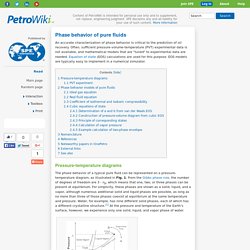 Often, sufficient pressure-volume-temperature (PVT) experimental data is not available, and mathematical models that are "tuned" to experimental data are needed. Equation of state (EOS) calculations are used for this purpose. EOS models are typically easy to implement in a numerical simulator. Pressure-temperature diagrams The phase behavior of a typical pure fluid can be represented on a pressure-temperature diagram, as illustrated in Fig. 1. Fig. 1 – Illustration of a pressure-temperature diagram for a pure fluid. According to the Gibbs phase rule, there are no degrees of freedom when three phases are in equilibrium. For two phases, however, the degrees of freedom are one, and we can set either the temperature or the pressure, but not both. Untitled Document. Bubble point. When heating a liquid consisting of two or more components, the bubble point is the temperature (at a given pressure) where the first bubble of vapor is formed. 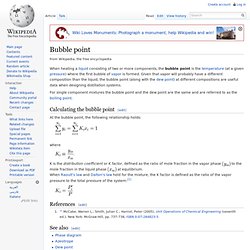 Given that vapor will probably have a different composition than the liquid, the bubble point (along with the dew point) at different compositions are useful data when designing distillation systems. For single component mixtures the bubble point and the dew point are the same and are referred to as the boiling point. Calculating the bubble point[edit] At the bubble point, the following relationship holds: where. Dew point. Vapor–liquid equilibrium. Vapor–liquid equilibrium (VLE) is a condition where a liquid and its vapor (gas phase) are in equilibrium with each other, a condition or state where the rate of evaporation (liquid changing to vapor) equals the rate of condensation (vapor changing to liquid) on a molecular level such that there is no net (overall) vapor–liquid interconversion. 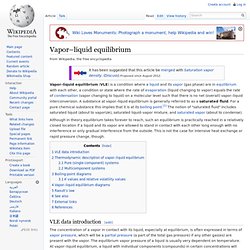 A substance at vapor–liquid equilibrium is generally referred to as a saturated fluid. For a pure chemical substance this implies that it is at its boiling point.[1] The notion of "saturated fluid" includes saturated liquid (about to vaporize), saturated liquid–vapor mixture, and saturated vapor (about to condense). Although in theory equilibrium takes forever to reach, such an equilibrium is practically reached in a relatively closed location if a liquid and its vapor are allowed to stand in contact with each other long enough with no interference or only gradual interference from the outside. VLE data introduction[edit] Dalton's law. In chemistry and physics, Dalton's law (also called Dalton's law of partial pressures) states that in a mixture of non-reacting gases, the total pressure exerted is equal to the sum of the partial pressures of the individual gases.[1] This empirical law was observed by John Dalton in 1801 and is related to the ideal gas laws. 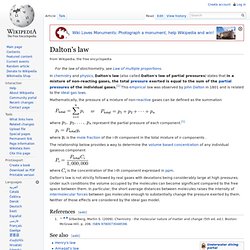 Mathematically, the pressure of a mixture of non-reactive gases can be defined as the summation or where. Predicting the Phase Equilibria of Carbon Dioxide Containing Mixtures Involved in CCS Processes Using the PPR78 Model. 1. 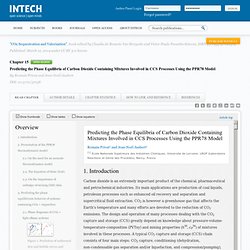 Introduction Carbon dioxide is an extremely important product of the chemical, pharmaceutical and petrochemical industries. Its main applications are production of coal liquids, petroleum processes such as enhanced oil recovery and separation and supercritical fluid extraction. Raoult's Law. Phase Equilibrium.