To sort (rc.network) -- not necessarily related 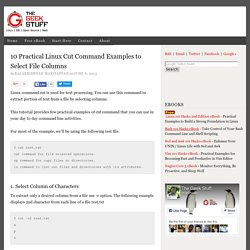 You can use this command to extract portion of text from a file by selecting columns. This tutorial provides few practical examples of cut command that you can use in your day to day command line activities. For most of the example, we’ll be using the following test file. $ cat test.txt cat command for file oriented operations. cp command for copy files or directories. ls command to list out files and directories with its attributes. 1. Field Separators. Go forward to Constant Size.Go backward to Changing Fields.Go up to Reading Files. 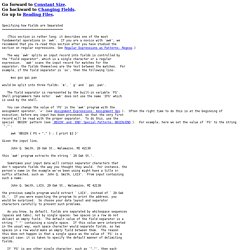 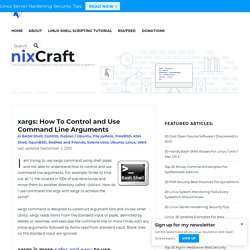 For example I’d like to find out all *.c file located in 100s of sub-directories and move them to another directory called ~/old.src. 10 Xargs Command Examples in Linux / UNIX. The xargs command is extremely useful when we combine it with other commands. 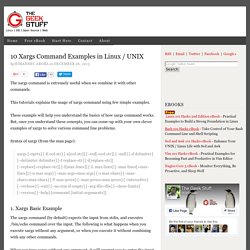 This tutorials explains the usage of xargs command using few simple examples. These example will help you understand the basics of how xargs command works. But, once you understand these concepts, you can come-up with your own clever examples of xargs to solve various command line problems. Syntax of xargs (from the man page): Bash - How to pipe input to while loop and preserve variables after loop ends. Understanding WPA-PSK and WPA2-PSK Authentication. Pre-Shared Key (PSK) is a client authentication method that uses a plain-English passphrase, containing up to 133 characters, to generate unique encryption keys for each wireless client. 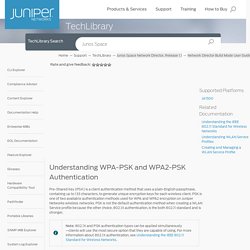 PSK is one of two available authentication methods used for WPA and WPA2 encryption on Juniper Networks wireless networks. PSK is not the default authentication method when creating a WLAN Service profile because the other choice, 802.1X authentication, is the both 802.11 standard and is stronger. Command line - How can I list files with their absolute path in linux? Linux - How does ` cat << EOF` work in bash? Xargs - Wikipedia. About[edit] For example, shell commands such as: or may fail with an error message of "Argument list too long" (meaning that the exec system call's limit on the length of a command line was exceeded) if there are too many files in /path. 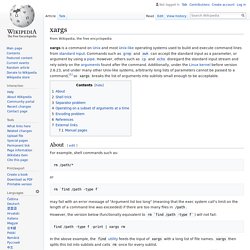