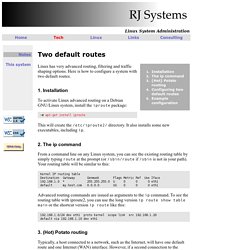 Here is how to configure a system with two default routes. 1. Installation. Linux networking - Why ip route add doesn't work, but ip route add with less details and then change works? Two Default Gateways on One System - Thomas-Krenn-Wiki. This article will describe the setup for two or more default gateways under Linux. 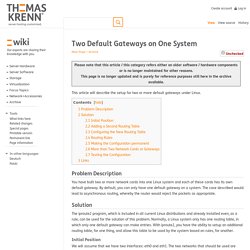 Problem Description You have built two or more network cards into one Linux system and each of these cards has its own default gateway. By default, you can only have one default gateway on a system. The case described would lead to asynchronous routing, whereby the router would reject the packets as appropriate. Solution. 12.04 - ip route with two default gateways. 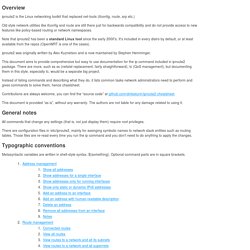 Old style network utilities like ifconfig and route are still there just for backwards compatibility and do not provide access to new features like policy-based routing or network namespaces. Note that iproute2 has been a standard Linux tool since the early 2000's. Multiple Default Gateways, Windows. Good Ideas for Network Setup. File Server/LAN Network, Registry Tuning.