Write (Unix) Compress. Compress is a Unix shell compression program based on the LZC compression method, which is an LZW implementation using variable size pointers as in LZ78. 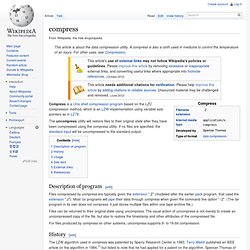 The uncompress utility will restore files to their original state after they have been compressed using the compress utility. If no files are specified, the standard input will be uncompressed to the standard output. Description of program[edit] Files can be returned to their original state using uncompress. The usual action of uncompress is not merely to create an uncompressed copy of the file, but also to restore the timestamp and other attributes of the compressed file. For files produced by compress on other systems, uncompress supports 9- to 16-bit compression. History[edit] The LZW algorithm used in compress was patented by Sperry Research Center in 1983. Usage[edit] Command-line parameters to uncompress are specified like this: uncompress switches files.

Uname. Uname (short for unix name) is a software program in Unix and Unix-like computer operating systems that prints the name, version and other details about the current machine and the operating system running on it. 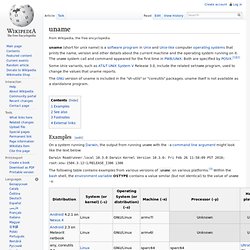 The uname system call and command appeared for the first time in PWB/UNIX. Both are specified by POSIX.[1][2] Some Unix variants, such as AT&T UNIX System V Release 3.0, include the related setname program, used to change the values that uname reports. The GNU version of uname is included in the "sh-utils" or "coreutils" packages. uname itself is not available as a standalone program. Examples[edit] Darwin Roadrunner.local 10.3.0 Darwin Kernel Version 10.3.0: Fri Feb 26 11:58:09 PST 2010; root:xnu-1504.3.12~1/RELEASE_I386 i386. Alias (command) Aliases can be created by supplying name/value pairs as arguments for the alias command. 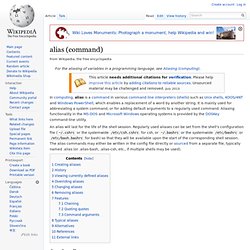 Umask. In UNIX, each file and directory has sets of attributes which control who is permitted access (aka modes). 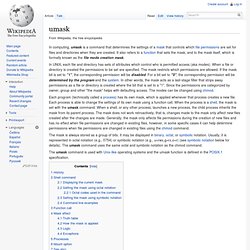 When a file or directory is created the permissions to be set are specified. The mask restricts which permissions are allowed. Type (Unix) Type is a Unix command that describes how its arguments would be interpreted if used as command names. 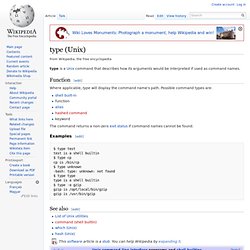 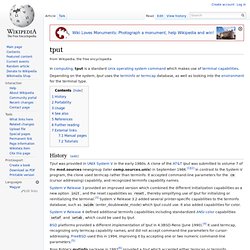 Depending on the system, tput uses the terminfo or termcap database, as well as looking into the environment for the terminal type. History[edit] Tput was provided in UNIX System V in the early 1980s. A clone of the AT&T tput was submitted to volume 7 of the mod.sources newsgroup (later comp.sources.unix) in September 1986.[1][2] In contrast to the System V program, the clone used termcap rather than terminfo.

Talk (software) Talk is a Unix text chat program, originally allowing messaging only between the users logged on to one multi-user computer—but later extended to allow chat to users on other systems. 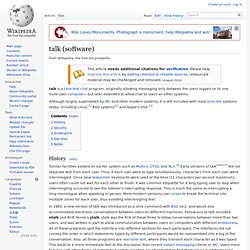 Although largely superseded by IRC and other modern systems, it is still included with most Unix-like systems today, including Linux,[1] BSD systems[2] and Apple's OSX.[3] In 1983, a new version of talk was introduced as a Unix command with BSD v4.2, and would also accommodate electronic conversations between users on different machines. Follow-ons to talk included ntalk and Britt Yenne's ytalk. ytalk was the first of these three to allow conversations between more than two users, and was written in part to allow communication between users on computers with different endianness. All of these programs split the interface into different sections for each participant.

Command-line Unix "talk", using a split screen user interface, was popular in the 1980s and early 1990s. Tail (Unix) The command-syntax is: tail [options] <file_name> By default, tail will output the last 10 lines of its input to the standard output. 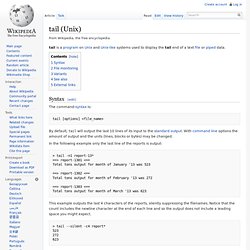 With command line options the amount of output and the units (lines, blocks or bytes) may be changed. In the following example only the last line of the reports is output: List of Unix commands. Split (Unix) Split is a Unix utility most commonly used to split a file into two or more smaller files. 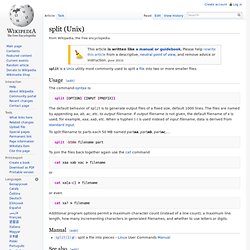 The command-syntax is: split [OPTION] [INPUT [PREFIX]] Pax (Unix) Pax has four general modes which are invoked by a combination of the -r ("read") option and -w ("write") option. 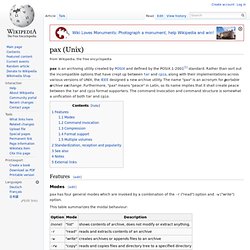 This table summarizes the modal behaviour: Examples: List contents of an archive: pax < archive.tar Extract contents of an archive into the current directory: Od (Unix) Od is a program for displaying ("dumping") data in various human-readable output formats. The name is an acronym for "octal dump" since it defaults to printing in the octal data format. It can also display output in a variety of other formats, including hexadecimal, decimal, and ASCII. It is useful for visualizing data that isn't in a human-readable format, like the executable code of a program. od is one of the earliest Unix programs, having appeared in version 1 AT&T Unix.

Mesg. The 'y' and 'n' options respectively allow and disallow write access to your terminal. When invoked with no option, the current permission is printed. % mesg is y % tty /dev/tty1 % mesg < /dev/tty2 is y % mesg n < /dev/tty2 % mesg < /dev/tty2 is n % mesg is y. Man page. The man page on man Usage[edit] To read a manual page for a Unix command, one can use The syntax for accessing the non-default manual section varies between different man implementations.

On Solaris, for example, the syntax for reading printf(3) is: On Linux and BSD derivatives the same invocation would be: Mailx. Usage[edit] A simplified syntax with some commonly used options might include: mailx [-s subject] [-c cc-addr] to-addr . . . -s subject of email (could be inserted later) -c send carbon copies to a user or users The end of message is indicated by a single '.' or by hitting ctrl+d. m4 (computer language)