BU-206a: Finding the Optimal Runtime and Power Ratio of Li-ion. Optimizing the selection of a Li-ion system that includes specific energy, specific power and runtime. 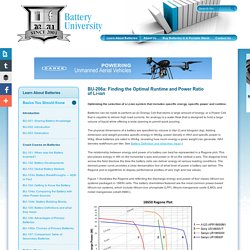 Batteries can be made to perform as an Energy Cell that stores a large amount of energy, or a Power Cell that is capable to deliver high load currents. An analogy is a water flask that is designed to hold a large volume of liquid while offering a wide opening to permit quick pouring. The physical dimensions of a battery are specified by volume in liter (l) and kilogram (kg). Adding dimension and weight provides specific energy in Wh/kg, power density in Wh/l and specific power in W/kg. Most batteries are rated in Wh/kg, revealing how much energy a given weight can generate. 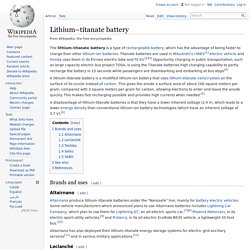 Titanate batteries are used in Mitsubishi's i-MiEV[1] electric vehicle and Honda uses them in its EV-neo electric bike and Fit EV.[2][3] Opportunity charging in public transportation, such as large capacity electric bus project TOSA, is using the Titanate batteries high charging capability to partly recharge the battery in 15 seconds while passengers are disembarking and embarking at bus stops[4] A lithium–titanate battery is a modified lithium-ion battery that uses lithium-titanate nanocrystals on the surface of its anode instead of carbon. This gives the anode a surface area of about 100 square meters per gram, compared with 3 square meters per gram for carbon, allowing electrons to enter and leave the anode quickly. This makes fast recharging possible and provides high currents when needed.[5] Brands and uses[edit] Lithium–sulfur battery.

Lithium–sulphur batteries may succeed lithium-ion cells because of their higher energy density and reduced cost from the use of sulfur.[3] Currently the best Li–S batteries offer specific energies on the order of 500 W·h/kg, significantly better than most lithium-ion batteries which are in the 150 to 200 range. 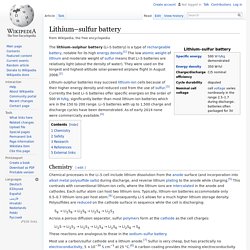 Li–S batteries with up to 1,500 charge and discharge cycles have been demonstrated. As of early 2014 none were commercially available.[4] Chemistry[edit] S 8 → Li 2S 8 → Li 2S 6 → Li 2S 4 → Li 2S 3 Across a porous diffusion separator, sulfur polymers form at the cathode as the cell charges: Li 2S → Li 2S 2 → Li 2S 3 → Li 2S 4 → Li 2S 6 → Li 2S 8 → S 8 These reactions are analogous to those in the sodium–sulfur battery. Mechanical properties of the lithiated sulfur compounds are strongly contingent on the lithium content, and with increasing lithium content, the strength of lithiated sulfur compounds improves, although this increment is not linear with lithiation.[13] Lithium iron phosphate battery. The lithium iron phosphate (LiFePO 4) battery, also called LFP battery (with "LFP" standing for "lithium ferrophosphate"), is a type of rechargeable battery, specifically a lithium-ion battery, which uses LiFePO 4 as a cathode material. 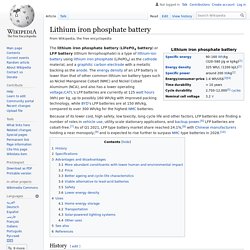 LiFePO 4 batteries have somewhat lower energy density than the more common LiCoO 2 design found in consumer electronics, but offer longer lifetimes, better power density (the rate that energy can be drawn from them) and are inherently safer. LiFePO 4 is finding a number of roles in vehicle use and backup power. History[edit] LiFePO 4 is a natural mineral of the olivine family (triphylite). Its use as a battery electrode was first described in published literature by John Goodenough's research group at the University of Texas in 1996,[2][3] as a cathode material for rechargeable lithium batteries. MIT has introduced a new coating that allows the ions to move more easily within the battery. Advantages and disadvantages[edit] Lithium polymer battery. A lithium polymer battery, or more correctly lithium-ion polymer battery (abbreviated variously as LiPo, LIP, Li-poly and others), is a rechargeable battery of lithium-ion technology in a pouch format. 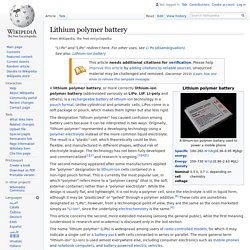 Unlike cylindrical and prismatic cells, LiPos come in a soft package or pouch, which makes them lighter but also less rigid. The designation "lithium polymer" has caused confusion among battery users because it can be interpreted in two ways. Originally, "lithium polymer" represented a developing technology using a polymer electrolyte instead of the more common liquid electrolyte. The result is a "plastic" cell, which theoretically could be thin, flexible, and manufactured in different shapes, without risk of electrolyte leakage. The technology has not been fully developed and commercialized[1][2] and research is ongoing.[3][4][5] The second meaning appeared after some manufacturers applied the "polymer" designation to lithium-ion cells contained in a non-rigid pouch format. 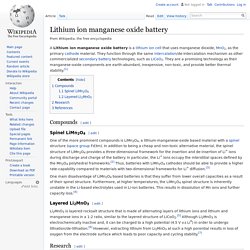 In addition to being a cheap and non-toxic alternative material, the spinel structure of LiMn2O4 provides a three-dimensional framework for the insertion and de-insertion of Li+ ions during discharge and charge of the battery. In particular, the Li+ ions occupy the interstitial spaces defined by the Mn2O4 polyhedral frameworks.[2] Thus, batteries with LiMn2O4 cathodes should be able to provide a higher rate-capability compared to materials with two-dimensional frameworks for Li+ diffusion.[3] One main disadvantage of LiMn2O4 based batteries is that they suffer from lower overall capacities as a result of their spinel structure.