Search WikiLeaks. Stratfor. Money and Intervention in Venezuela. Wikileaks: US Embassy Requests Funding for Anti-Chavez Groups. The latest Wikileaks releases include cables sent from the US Embassy in Caracas to the State Department, Central Intelligence Agency, National Security Council, and other US entities, indicating requests for additional US government funding for opposition groups in Venezuela. The cables corroborate documents previously obtained under the US Freedom of Information Act (FOIA) that evidence ongoing US funding to support anti-Chavez groups and political parties in Venezuela actively working to destabilize and overthrow the South American government. One document dated March 2009, authored by Charge D’Affaires John Caulfield, reveals $10 million in funding via the US Embassy in Caracas to state and municipal opposition governments, as well as several NGOs, youth groups and political campaigns to counter the Chavez government.

The US diplomat was referring to regional elections in 2008 during which opposition parties won in 6 out of 23 states and dozens of municipalities. Eva Golinger. Eva Golinger, wikipedia. Golinger is the author of several books on Venezuela's relationship with the United States. 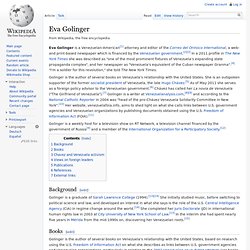 She is an outspoken supporter of the former socialist president of Venezuela, the late Hugo Chávez.[5] As of May 2011 she serves as a foreign policy advisor to the Venezuelan government.[6] Chávez has called her La novia de Venezuela ("The Girlfriend of Venezuela").[7] Golinger is a writer at Venezuelanalysis.com,[8][9] and according to the National Catholic Reporter in 2004 was "head of the pro-Chávez Venezuela Solidarity Committee in New York".[10] Her website, venezuelafoia.info, aims to shed light on what she calls links between U.S. government agencies and Venezuelan organizations by publishing documents obtained using the U.S.

Freedom of Information Act (FOIA).[11] Golinger is a weekly host for a television show on RT Network, a television channel financed by the government of Russia[4] and a member of the International Organization for a Participatory Society.[12] Eva Golinger (evagolinger) sur Twitter. Money and Intervention in Venezuela. Wikileaks: US Embassy Requests Funding for Anti-Chavez Groups. 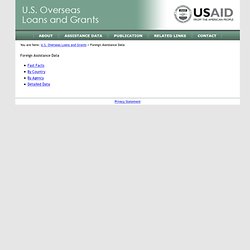 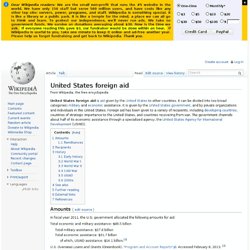 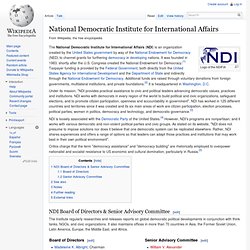 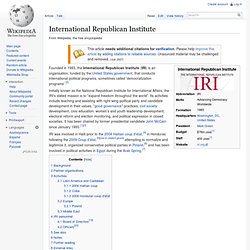 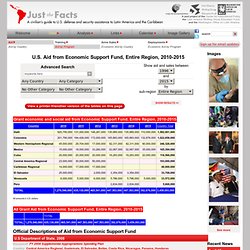 Support will be provided in the areas of gang prevention, community policing and establishing a community action fund targeted to poor, economically challenged and violent crime communities. Activities will reach countries in the sub-region based on existing gang violence and vulnerable youth with an emphasis on the northern tier, e.g., Guatemala, El Salvador and Honduras. Economic Support Fund. The Cubian Project.