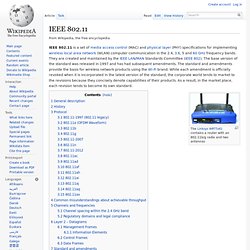 They are created and maintained by the IEEE LAN/MAN Standards Committee (IEEE 802). The base version of the standard was released in 1997 and has had subsequent amendments. The standard and amendments provide the basis for wireless network products using the Wi-Fi brand. While each amendment is officially revoked when it is incorporated in the latest version of the standard, the corporate world tends to market to the revisions because they concisely denote capabilities of their products. As a result, in the market place, each revision tends to become its own standard. The LinksysWRT54G contains a router with an 802.11b/g radio and two antennas. 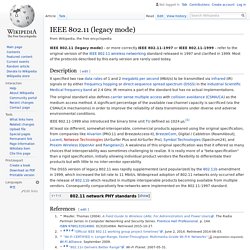 Most of the protocols described by this early version are rarely used today. It specified two raw data rates of 1 and 2 megabits per second (Mbit/s) to be transmitted via infrared (IR) signals or by either frequency hopping or direct-sequence spread spectrum (DSSS) in the Industrial Scientific Medical frequency band at 2.4 GHz.

IR remains a part of the standard but has no actual implementations. The original standard also defines carrier sense multiple access with collision avoidance (CSMA/CA) as the medium access method. A significant percentage of the available raw channel capacity is sacrificed (via the CSMA/CA mechanisms) in order to improve the reliability of data transmissions under diverse and adverse environmental conditions. 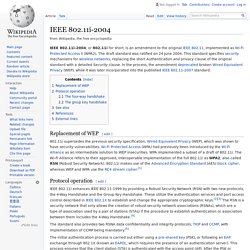 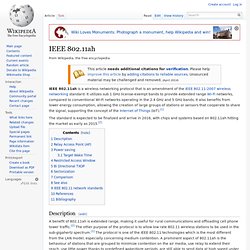 It utilizes sub 1 GHz license-exempt bands to provide extended range Wi-Fi networks, compared to conventional Wi-Fi networks operating in the 2.4 GHz and 5 GHz bands. It also benefits from lower energy consumption, allowing the creation of large groups of stations or sensors that cooperate to share the signal, supporting the concept of the Internet of Things (IoT).[1] The standard is expected to be finalized and arrive in 2016, with chips and systems based on 802.11ah hitting the market as early as 2015.[2] Description[edit] Relay Access Point (AP)[edit] Power saving[edit] Power saving stations are divided into two classes: TIM stations and non-TIM stations.

Target Wake Time[edit] Target Wake Time (TWT) is a function that permits an AP to define a specific time or set of times for individual stations to access the medium. Restricted Access Window[edit] IEEE 802.11af. Physical layer[edit] The physical (PHY) layer in 802.11af is based on the orthogonal frequency division multiplexing (OFDM) scheme specified in 802.11ac.[5] The propagation path loss as well as the attenuation by materials such as brick and concrete is lower in the UHF and VHF bands than in the 2.4 and 5 GHz bands, which increases the possible range compared to 802.11 a/b/g/n/ac.[3] The frequency channels are 6 to 8 MHz wide, depending on the regulatory domain.[3] Up to four channels may be bonded in either one or two contiguous blocks.[3] MIMO operation is possible with up to four streams used for either space–time block code (STBC) or multi-user (MU-MIMO) operation.[3] Data rates[edit] The achievable data rate per spatial stream is 26.7 Mbit/s for 6 and 7 MHz channels and 35.6 Mbit/s for 8 MHz channels.[6] With four spatial streams and four bonded channels, the maximum data rate is 426.7 Mbit/s in 6 and 7 MHz channels and 568.9 Mbit/s for 8 MHz channels.[6] Spectrum regulation[edit] 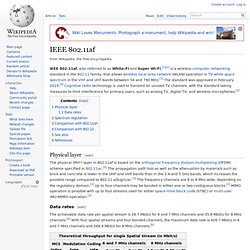 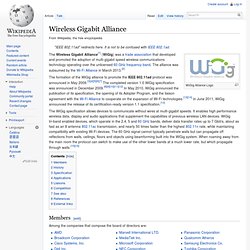 The alliance was subsumed by the Wi-Fi Alliance in March 2013.[2] The formation of the WiGig alliance to promote the IEEE 802.11ad protocol was announced in May 2009.[3][4][5][6][7] The completed version 1.0 WiGig specification was announced in December 2009.[8][9][10][11][12] In May 2010, WiGig announced the publication of its specification, the opening of its Adopter Program, and the liaison agreement with the Wi-Fi Alliance to cooperate on the expansion of Wi-Fi technologies.[13][14] In June 2011, WiGig announced the release of its certification-ready version 1.1 specification.[13] The WiGig specification allows devices to communicate without wires at multi-gigabit speeds.

Members[edit] Among the companies that compose the board of directors are: IEEE 802.11ac. IEEE 802.11ac is a wireless networking standard in the 802.11 family (which is marketed under the brand name Wi-Fi), developed in the IEEE Standards Association process,[1] providing high-throughput wireless local area networks (WLANs) on the 5 GHz band.[1] The standard was developed from 2011 through 2013 and approved in January 2014.[1][2] According to a study, devices with the 802.11ac specification are expected to be common by 2015 with an estimated one billion spread around the world.[3] This specification has expected multi-station WLAN throughput of at least 1 gigabit per second and a single link throughput of at least 500 megabits per second (500 Mbit/s). 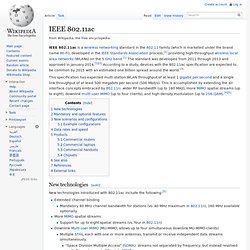 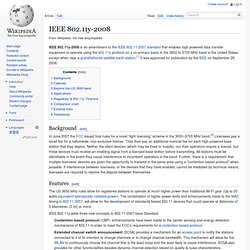 Background[edit] In June 2007 the FCC issued final rules for a novel “light licensing” scheme in the 3650–3700 MHz band.[2] Licensees pay a small fee for a nationwide, non-exclusive license. They then pay an additional nominal fee for each high powered base station that they deploy. Neither the client devices (which may be fixed or mobile), nor their operators require a license, but these devices must receive an enabling signal from a licensed base station before transmitting. All stations must be identifiable in the event they cause interference to incumbent operators in the band. IEEE 802.11w-2009. IEEE 802.11w-2009 is an approved amendment to the IEEE 802.11 standard to increase the security of its management frames. 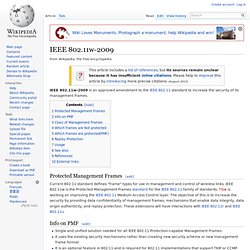 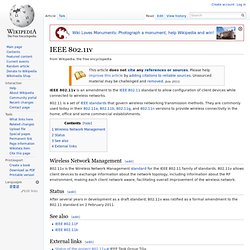 IEEE 802.11u. IEEE 802.11u-2011 is an amendment to the IEEE 802.11-2007 standard to add features that improve interworking with external networks. 802.11 is a family of IEEE technical standards for mobile communication devices such as laptop computers or multi-mode phones to join a wireless local area network (WLAN) widely used in the home, public hotspots and commercial establishments. The IEEE 802.11u standard was published on February 25, 2011. Some amendment added to IEEE 802.11[edit] Network discovery and selection[edit] QoS map distribution[edit] This provides a mapping between the IP’s differentiated services code point (DSCP) to over-the-air Layer 2 priority on a per-device basis, facilitating end-to-end QoS. For users who are not pre-authorized[edit] IEEE 802.11s. IEEE 802.11s is an IEEE 802.11 amendment for mesh networking, defining how wireless devices can interconnect to create a WLAN mesh network, which may be used for static topologies and ad hoc networks. 802.11 is a set of IEEE standards that govern wireless networking transmission methods.

They are commonly used today in their 802.11a, 802.11b, 802.11g, and 802.11n versions to provide wireless connectivity in the home, office and some commercial establishments. Description[edit] Closely related standards[edit] IEEE 802.11r-2008. IEEE 802.11r-2008 or fast BSS transition (FT) is an amendment to the IEEE 802.11 standard to permit continuous connectivity aboard wireless devices in motion, with fast and secure handoffs from one base station to another managed in a seamless manner. It was published on July 15, 2008. Rationale for the amendment[edit] 802.11, commonly referred to as Wi-Fi, is widely used for wireless communications. Many deployed implementations have effective ranges of only a few hundred meters, so to maintain communications devices in motion that use it will need to handoff from one access point to another.

IEEE 802.11p. IEEE 802.11p is an approved amendment to the IEEE 802.11 standard to add wireless access in vehicular environments (WAVE), a vehicular communication system. It defines enhancements to 802.11 (the basis of products marketed as Wi-Fi) required to support Intelligent Transportation Systems (ITS) applications. This includes data exchange between high-speed vehicles and between the vehicles and the roadside infrastructure in the licensed ITS band of 5.9 GHz (5.85-5.925 GHz).

IEEE 802.11n-2009. IEEE 802.11n-2009, commonly shortened to 802.11n, is a wireless networking standard that uses multiple antennas to increase data rates. It is an amendment to the IEEE 802.11-2007 wireless networking standard. Its purpose is to improve network throughput over the two previous standards—802.11a and 802.11g—with a significant increase in the maximum net data rate from 54 Mbit/s to 600 Mbit/s (slightly higher gross bit rate including for example error-correction codes, and slightly lower maximum throughput) with the use of four spatial streams at a channel width of 40 MHz.[1][2] 802.11n standardized support for multiple-input multiple-output and frame aggregation, and security improvements, among other features.

Originally described as clause 17 of the 1999 specification, it is now defined in clause 18 of the 2012 specification and provides protocols that allow transmission and reception of data at rates of 1.5 to 54Mbit/s. It has seen widespread worldwide implementation, particularly within the corporate workspace. While the original amendment is no longer valid, the term "802.11a" is still used by wireless access point (cards and routers) manufacturers to describe interoperability of their systems at 5.8 GHz, 54 Mbit/s (54 x 106 bits per second). Standard wi-fi: 802.11. Protocolli wi-fi: a,b,g,n,ac,ad. Wireless AD, standard wi-fi ad. Wireless AC, standard wi-fi ac.