Hadoop with Python. Hadoop Streaming: Writing A Hadoop MapReduce Program In Python. The quantity of digital data generated every day is growing exponentially with the advent of Digital Media, Internet of Things among other developments. 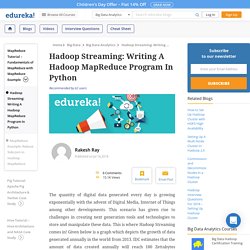 This scenario has given rise to challenges in creating next generation tools and technologies to store and manipulate these data. This is where Hadoop Streaming comes in! Given below is a graph which depicts the growth of data generated annually in the world from 2013. IDC estimates that the amount of data created annually will reach 180 Zettabytes in 2025! Source: IDC IBM states that, every day, almost 2.5 quintillion bytes of data are created, with 90 percent of world’s data created in the last two years!

Since MapReduce framework is based on Java, you might be wondering how a developer can work on it if he/ she does not have experience in Java. 3. A Framework for Python and Hadoop Streaming - Data Analytics with Hadoop [Book] The current version of Hadoop MapReduce is a software framework for composing jobs that process large amounts of data in parallel on a cluster, and is the native distributed processing framework that ships with Hadoop. 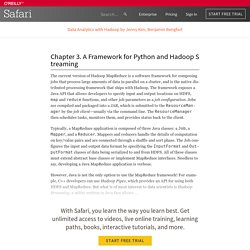 The framework exposes a Java API that allows developers to specify input and output locations on HDFS, map and reduce functions, and other job parameters as a job configuration. Jobs are compiled and packaged into a JAR, which is submitted to the ResourceManager by the job client—usually via the command line. The ResourceManager then schedules tasks, monitors them, and provides status back to the client. Typically, a MapReduce application is composed of three Java classes: a Job, a Mapper, and a Reducer. Mappers and reducers handle the details of computation on key/value pairs and are connected through a shuffle and sort phase. However, Java is not the only option to use the MapReduce framework! Develop Python streaming MapReduce jobs with HDInsight - Azure.

Hadoop - Streaming. Advertisements Hadoop streaming is a utility that comes with the Hadoop distribution. 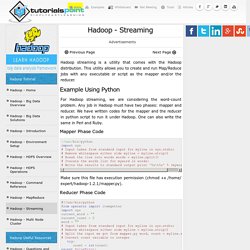 This utility allows you to create and run Map/Reduce jobs with any executable or script as the mapper and/or the reducer. Example Using Python For Hadoop streaming, we are considering the word-count problem. Any job in Hadoop must have two phases: mapper and reducer. Mapper Phase Code ! Make sure this file has execution permission (chmod +x /home/ expert/hadoop-1.2.1/mapper.py). Reducer Phase Code #! Writing An Hadoop MapReduce Program In Python. In this tutorial I will describe how to write a simple MapReduce program for Hadoop in the Python programming language. Even though the Hadoop framework is written in Java, programs for Hadoop need not to be coded in Java but can also be developed in other languages like Python or C++ (the latter since version 0.14.1).

However, Hadoop’s documentation and the most prominent Python example on the Hadoop website could make you think that you must translate your Python code using Jython into a Java jar file. Obviously, this is not very convenient and can even be problematic if you depend on Python features not provided by Jython. Another issue of the Jython approach is the overhead of writing your Python program in such a way that it can interact with Hadoop – just have a look at the example in $HADOOP_HOME/src/examples/python/WordCount.py and you see what I mean. Our program will mimick the WordCount, i.e. it reads text files and counts how often words occur.

Map step: mapper.py #! #! #! Hadoop Streaming Tutorial Using Python with Examples. It uses UNIX standard streams as the interface between Hadoop and your program so you can write Mapreduce program in any language which can write to standard output and read standard input. 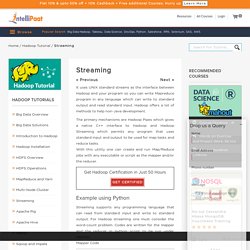 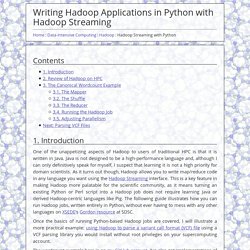 Introduction One of the unappetizing aspects of Hadoop to users of traditional HPC is that it is written in Java. Java is not designed to be a high-performance language and, although I can only definitively speak for myself, I suspect that learning it is not a high priority for domain scientists. As it turns out though, Hadoop allows you to write map/reduce code in any language you want using the Hadoop Streaming interface. Once the basics of running Python-based Hadoop jobs are covered, I will illustrate a more practical example: using Hadoop to parse a variant call format (VCF) file using a VCF parsing library you would install without root privileges on your supercomputing account.

The wordcount example here is on my GitHub account. 2. This guide assumes you are familiar with Hadoop and map/reduce at a conceptual level. This guide also assumes you understand the basics of running a Hadoop cluster on an HPC resource (supercomputer). What is Hadoop?: SQL Comparison. Hadoop (Cloud Computing) Python Hadoop Ports.