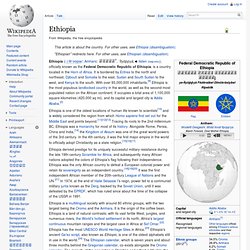 , ʾĪtyōṗṗyā, listen ), officially known as the Federal Democratic Republic of Ethiopia, is a country located in the Horn of Africa. It is bordered by Eritrea to the north and northeast, Djibouti and Somalia to the east, Sudan and South Sudan to the west, and Kenya to the south. With over 93,000,000 inhabitants,[9] Ethiopia is the most populous landlocked country in the world, as well as the second-most populated nation on the African continent. It occupies a total area of 1,100,000 square kilometres (420,000 sq mi), and its capital and largest city is Addis Ababa.[2] Ethiopia is one of the oldest locations of human life known to scientists[10] and is widely considered the region from which Homo sapiens first set out for the Middle East and points beyond.[11][12][13] Tracing its roots to the 2nd millennium BC, Ethiopia was a monarchy for most of its history. 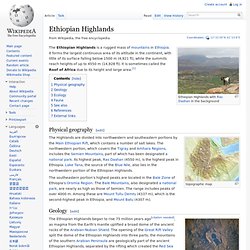 It forms the largest continuous area of its altitude in the continent, with little of its surface falling below 1500 m (4,921 ft), while the summits reach heights of up to 4550 m (14,928 ft). It is sometimes called the Roof of Africa due to its height and large area.[1] Physical geography[edit] topographic map The Highlands are divided into northwestern and southeastern portions by the Main Ethiopian Rift, which contains a number of salt lakes.

The southeastern portion's highest peaks are located in the Bale Zone of Ethiopia's Oromia Region. Geology[edit] Dendi Caldera, a collapsed volcano in the mountain region The Ethiopian Highlands began to rise 75 million years ago[citation needed], as magma from the Earth's mantle uplifted a broad dome of the ancient rocks of the Arabian-Nubian Shield. Ecology[edit] Ethiopia - Land for Sale. Just a few decades ago, Ethiopia was a country defined by its famines, particularly between 1983-1985 when in excess of half a million people starved to death as a consequence of drought, crop failure and a brutal civil war. 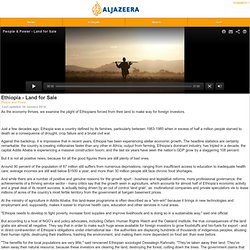 Against this backdrop, it is impressive that in recent years, Ethiopia has been experiencing stellar economic growth. The headline statistics are certainly remarkable: the country is creating millionaires faster than any other in Africa; output from farming, Ethiopia’s dominant industry, has tripled in a decade; the capital Addis Ababa is experiencing a massive construction boom; and the last six years have seen the nation’s GDP grow by a staggering 108 percent. But it is not all positive news, because for all the good figures there are still plenty of bad ones.

"Ethiopia needs to develop to fight poverty, increase food supplies and improve livelihoods and is doing so in a sustainable way," said one official. So what does all this mean for the people on the ground? Atlas of Ethiopia. Ethiopia travel guide. Ethiopia (Amharic: ኢትዮጵያ ʾĪtyōṗṗyā) is a fascinating country in the Horn of Africa and is the second-most populous nation in this continent (after Nigeria). 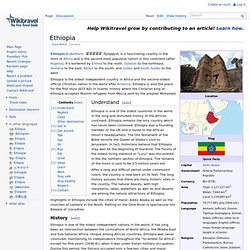 Derg. The Derg, Common Derg or Dergue (Ge'ez: ደርግ, meaning "committee" or "council") is the short name of the Coordinating Committee of the Armed Forces, Police, and Territorial Army that ruled Ethiopia from 1974 to 1987. 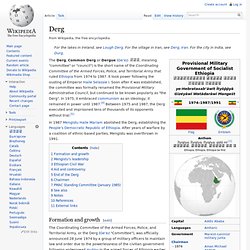 It took power following the ousting of Emperor Haile Selassie I. Soon after it was established, the committee was formally renamed the Provisional Military Administrative Council, but continued to be known popularly as "the Derg". In 1975, it embraced communism as an ideology; it remained in power until 1987.[4] Between 1975 and 1987, the Derg executed and imprisoned tens of thousands of its opponents without trial.[5] Exceptions to the democratic rule - Opinion. In 2012, after having been sentenced to 11 years in prison for "terrorism" for illegally entering Ethiopia from Somalia in the presence of the Ogaden National Liberation Front, Swedish journalists Johan Persson and Martin Schibbye took the advice of their legal council, confessed to their "crimes" and requested an official pardon. 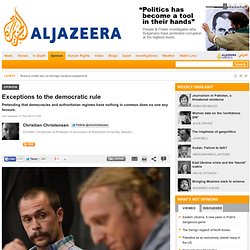 It was a pragmatic move - both journalists vehemently denied the charges and considered any confession to be a charade - taken to save their own skins. The request was granted, and the journalists were released after 438 days in jail. Their capture, trial, imprisonment and subsequent release were, as one would expect, all big news stories in Sweden. As told in the media, the Persson/Schibbye story followed a standard trope: Backward, undemocratic Africa versus progressive, democratic Sweden. Human rights violators versus human rights defenders. Persson and Schibbye, as it turns out. Undemocratic thuggery Jailing journalists for 14 months?