Solar planes aren't the green future of air travel. But here's what could be. By any standard, the Solar Impulse 2 is a marvel of engineering. 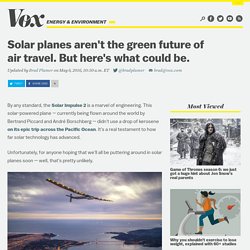 This solar-powered plane — currently being flown around the world by Bertrand Piccard and André Borschberg — didn't use a drop of kerosene on its epic trip across the Pacific Ocean. It's a real testament to how far solar technology has advanced. Unfortunately, for anyone hoping that we'll all be puttering around in solar planes soon — well, that's pretty unlikely. Photo by Jean Revillard via Getty Images Consider: The Solar Impulse 2 features 17,000 solar cells crammed onto its jumbo jet–size wings, along with four lithium-polymer batteries to store electricity for nighttime. By contrast, a Boeing 747-400 running on jet fuel can transport some 400 people at a time, at top speeds of 570 miles per hour. Nor is it enough to load up on batteries charged by solar on the ground, since that would add even more weight to the plane, vastly increasing the energy needed for takeoff. So if not solar planes, then what? Windows 10 Optimization.

Full Color 3D Printer Upgrade Leaves Competition In The Dust. Most hobby 3D printers are based on FDM, extruding a single-color noodle of melted plastic to build up an object. 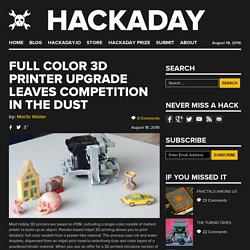 Powder-based inkjet 3D printing allows you to print detailed, full-color models from a plaster-like material. The process uses ink and water droplets, dispensed from an inkjet print head to selectively fuse and color layers of a powdered binder material. When you see an offer for a 3D printed miniature version of yourself (or someone else), they are made with powder. [Aad van der Geest] wants to put this technology on your desktop with ColorPod, a kit that converts your FDM printer into a powder printer. On the hardware side, his solution consists of a special printhead — shown in the header image — that mounts next to the extruder nozzle of an FDM machine. The dispenser and roller lay down the powder. An inkjet head fuses the layers. Seeds of Doubt. Early this spring, the Indian environmentalist Vandana Shiva led an unusual pilgrimage across southern Europe. 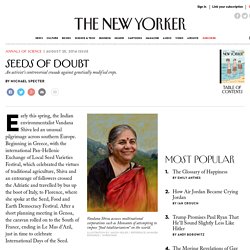 Beginning in Greece, with the international Pan-Hellenic Exchange of Local Seed Varieties Festival, which celebrated the virtues of traditional agriculture, Shiva and an entourage of followers crossed the Adriatic and travelled by bus up the boot of Italy, to Florence, where she spoke at the Seed, Food and Earth Democracy Festival. After a short planning meeting in Genoa, the caravan rolled on to the South of France, ending in Le Mas d’Azil, just in time to celebrate International Days of the Seed. Shiva’s fiery opposition to globalization and to the use of genetically modified crops has made her a hero to anti-G.M.O. activists everywhere. The purpose of the trip through Europe, she had told me a few weeks earlier, was to focus attention there on “the voices of those who want their agriculture to be free of poison and G.M.O.s.”

Real Men do Hit Women. The violence at the heart of masculinity Within days of becoming prime minister in September 2015, Malcolm Turnbull was on television declaring ‘Real men don’t hit women’. 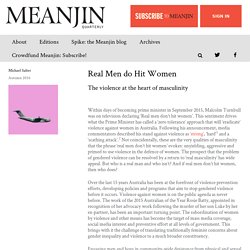 This sentiment drives what the Prime Minister has called a ‘zero tolerance’ approach that will ‘eradicate’ violence against women in Australia. Following his announcement, media commentators described his stand against violence as ‘strong’, ‘hard’1 and a ‘scathing attack’.2 Not coincidentally, these are the very qualities of masculinity that the phrase ‘real men don’t hit women’ evokes: unyielding, aggressive and primed to use violence in the defence of women. The prospect that the problem of gendered violence can be resolved by a return to ‘real masculinity’ has wide appeal.

But who is a real man and who isn’t? Over the last 15 years Australia has been at the forefront of violence prevention efforts, developing policies and programs that aim to stop gendered violence before it occurs. [How To] Capture Virtual-key code of a Keypress - Tutorials - AutoHotkey Community. You may refer MSDN for Virtual-key codes and/orDownload VK_NAMES.INI [4K] which contains the list of Virtual-key codes with names. 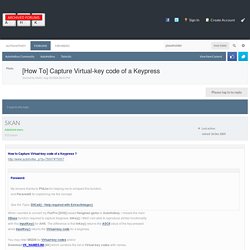 Download InputKey.ahk [0.9K] Facts / Features :[*:2vxa8t08]InputKey() is thread specific! Means you cannot use it to log general keyboard activity. It can scan keypress only for the script that is calling the function.You may use it as a thread-specific Wait For Any Key. [*:2vxa8t08]You need have a GUI or any visual component active on the screen for InputKey() to work. About Raw Input (Windows) DNSCrypt. Background: The need for a better DNS security DNS is one of the fundamental building blocks of the Internet. 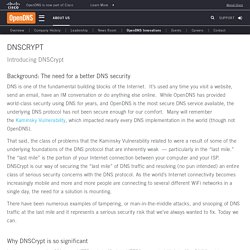 It’s used any time you visit a website, send an email, have an IM conversation or do anything else online. While OpenDNS has provided world-class security using DNS for years, and OpenDNS is the most secure DNS service available, the underlying DNS protocol has not been secure enough for our comfort. Many will remember the Kaminsky Vulnerability, which impacted nearly every DNS implementation in the world (though not OpenDNS). That said, the class of problems that the Kaminsky Vulnerability related to were a result of some of the underlying foundations of the DNS protocol that are inherently weak — particularly in the “last mile.” The Republican Horse Race Is Over, and Journalism Lost. Though it seems as if Mr. 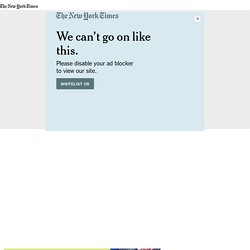 Trump’s success came out of the blue, it didn’t. The first signs that something was amiss in the coverage of the era actually surfaced in the 2014 midterms. En dan over links radicalisme en extremisme. Extend ram to SD via swap. Free Online Tools For Developers - To Beautify, Validate, Minify, Analyse, Convert JSON, XML, JavaScript, CSS, HTML, Excel. Apache Storm. A Trump Sampler: His Changing Views. “I generally oppose gun control, but I support the ban on assault weapons and I also support a slightly longer waiting period to purchase a gun.” — “The America We Deserve,” by Donald J. 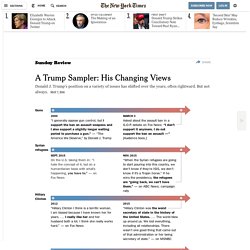 Trump Asked about the assault ban in a G.O.P. debate on Fox News: “I don’t support it anymore. I do not support the ban on assault —” [Audience boos.] On the U.S. taking them in: “I hate the concept of it, but on a humanitarian basis with what’s happening, you have to.” — on Fox News “When the Syrian refugees are going to start pouring into this country, we don’t know if they’re ISIS, we don’t know if it’s a Trojan horse.” Address space. This article is about a concept used universally in computing. 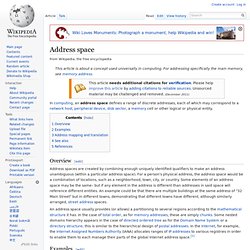 For addressing specifically the main memory, see memory address. In computing, an address space defines a range of discrete addresses, each of which may correspond to a network host, peripheral device, disk sector, a memory cell or other logical or physical entity. Overview[edit] How to Make a Bootable Flash Drive using ISObooter. This article was originally about using GRUB2 to boot various Linuxes directly out of their ISO files. 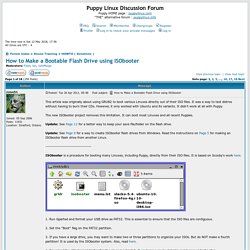 It was a way to test distros without having to burn their CDs. However, it only worked with Ubuntu and its variants. It didn't work at all with Puppy. The new ISObooter project removes this limitation. Puppy Linux Discussion Forum. Data visualisation tools. SSH Tunnel - Local and Remote Port Forwarding Explained With Examples - Trackets Blog. There are two ways to create an SSH tunnel, local and remote port forwarding (there’s also dynamic forwarding, but we won’t cover that here). The best way to understand these is by an example, let’s start with local port forwarding. Imagine you’re on a private network which doesn’t allow connections to a specific server. IoC : Ulises Fasoli's blog: Multi-hop ssh tunnel - howto : Creating a SSH tunnel with port forwarding between multiple hosts.

FontIcons have become really popular in the past few years and they have a lot of advantages such as : They are vector based so no loss in quality when re-sizing The ability to easily change their size/color/shade ; without involving an image editor (they are just fonts!) The ability to combine font-icons or add text-decorations, gradients, textures (depending on browser support) When creating FontIcons you have a few options, here I will discuss how to create them from PNG files 1. Tech and gender. United States Military Environmental Devastation and Destruction of the Pacific Ocean.

The United States military has become a runaway juggernaut of environmental devastation and destruction. From the global climate engineering assault (that is poisoning the entire planet and ripping Earth’s climate and life support systems apart), to the insane, blatant, and willful slaughter of ocean life, the actions of our military are truly beyond rational comprehension. Though many have chosen to primarily blame Fukushima fallout for the shocking North American west coast marine life collapse, there is much more to the story. How bad is the die-off? The recent headlines below should be a stark wakeup call.

Microsoft is breaking Windows 7 to get users to upgrade to Windows 10. Microsoft has made a change to an update for Windows 7 that can prevent certain systems from booting. While you might expect me to say, “good news, the software giant has fixed the problem”, in fact what Microsoft has done is switch the update from “optional”, to “recommended”. So, on some systems, it will now install, and break Windows 7 automatically. There is good news though, and that’s you can solve the problem and get your computer working again by (can you guess?) Upgrading to Windows 10. X11 Forwarding using SSH. As I have explained earlier, using XDMCP to display X across Internet is basically a no-no, due to it's lack of encryption across the Internet. One way to enforce the traffic security is to use the SSH by the way of X11 tunnelling or port forwarding.