Tendency of the rate of profit to fall. Notes on Marx's Theory of The Falling Rate of Profit. 5 - Marx on not becoming your job. Positive Liberty. John Creighton wrote:As was mentioned above, the idea is not unique to communism but I just happened to stumble across a relevant quote by Marx. 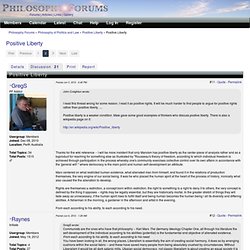 From 1: [II. 1. Preconditions of the Real Liberation of Man] [...] We shall, of course, not take the trouble to enlighten our wise philosophers by explaining to them that the …liberation" of man is not advanced a single step by reducing philosophy, theology, substance and all the trash to …self-consciousness" and by liberating man from the domination of these phrases, which have never held him in thrall. Nor will we explain to them that it is only possible to achieve real liberation in the real world and by employing real means, that slavery cannot be abolished without the steam-engine and the mule and spinning-jenny, serfdom cannot be abolished without improved agriculture, and that, in general, people cannot be liberated as long as they are unable to obtain food and drink, housing and clothing in adequate quality and quantity. 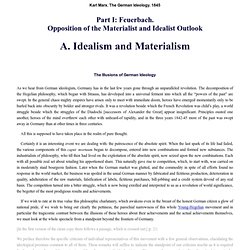 The German Ideology. 1845 Part I: Feuerbach. 6 - keeping down the cost of subsistence in capitaliwm. Class 07 Reading Marx's Capital Vol I with David Harvey. Paper growth vs long term growth. Falling Rate of profit fm glossary of terms. Factory-committees The factory committees, which came into being in March 1917, immediately after the victory of the February Revolution, were class organisations of the workers. 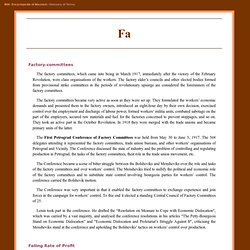 The factory elder’s councils and other elected bodies formed from provisional strike committees in the periods of revolutionary upsurge are considered the forerunners of the factory committees. The factory committees became very active as soon as they were set up. They formulated the workers’ economic demands and presented them to the factory owners, introduced an eight-hour day by their own decision, exercised control over the employment and discharge of labour power, formed workers’ militia units, combated sabotage on the part of the employers, secured raw materials and fuel for the factories concerned to prevent stoppages, and so on. 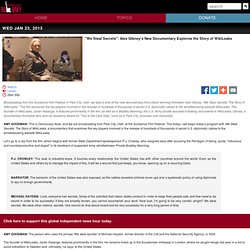 , and we are broadcasting from Park City, Utah, at the Sundance Film Festival. This today—we begin today’s program with We Steal Secrets: The Story of WikiLeaks, a documentary that examines the key players involved in the release of hundreds of thousands of secret U.S. diplomatic cables to the whistleblowing website WikiLeaks. Let’s go to a clip from the film, which begins with former State Department spokesperson P.J. Crowley, who resigned days after accusing the Pentagon of being, quote, "ridiculous and counterproductive and stupid" in its treatment of suspected Army whistleblower Private Bradley Manning. P.J. 3 - violent police harassment.

Laurie Penny: it was no cup of tea inside the Whitehall police kettle. It's the coldest day of the year, and I've just spent seven hours being kettled in Westminster. 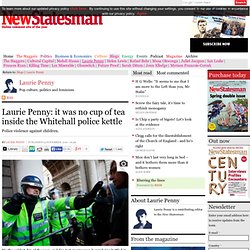 That sounds jolly, doesn't it? It sounds a bit like I went and had a lovely cup of tea with the Queen, rather than being trapped into a freezing pen of frightened teenagers and watching baton-wielding police kidney-punching children, six months into a government that ran an election campaign on a platform of fairness. So before we go any further, let's remind ourselves precisely what kettling is, and what it's for. Take a protest, one whose premise is uncomfortable for the administration -- say, yesterday's protest, with thousands of teenagers from all over London walking out of lessons and marching spontaneously on Westminster to voice their anger at government cuts to education funding that will prevent thousands from attending college and university. 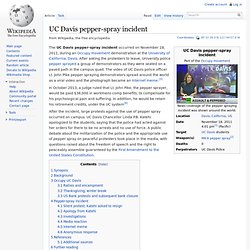 After asking the protesters to leave, University police pepper sprayed a group of demonstrators as they were seated on a paved path in the campus quad. The video of UC Davis police officer Lt. John Pike pepper spraying demonstrators spread around the world as a viral video and the photograph became an Internet meme.[3] In October 2013, a judge ruled that Lt. John Pike, the pepper sprayer, would be paid $38,000 in workmens comp benefits, to compensate for his psychological pain and suffering. UC Davis Protestors Pepper Sprayed. DN! Accused WikiLeaks Whistleblower Bradley Manning Testifies He Thought He Would "Die in Custody" JUAN GONZÁLEZ: Bradley Manning, the U.S. 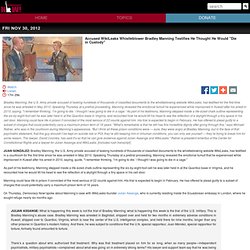 Army private accused of leaking hundreds of thousands of classified documents to the whistleblowing website WikiLeaks, has testified in a courtroom for the first time since he was arrested in May 2010. Speaking Thursday at a pretrial proceeding, Manning revealed the emotional tumult that he experienced while imprisoned in Kuwait after his arrest in 2010, saying, quote, "I remember thinking, ’I’m going to die.’

I thought I was going to die in a cage. " 4 - Models of conflict war & competition. The USA... Sarah Harved, 50 yrs after blowback. Predator Drones and Blowback: America’s Next Hiroshima, Nagasaki, and 9/11. Americans love war. 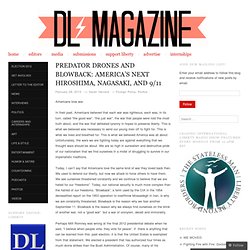 In their past, Americans believed that each war was righteous; each was, in its turn, called “the good war”, “the just war”, the war that people were told the most truth about, and the war that defeated tyranny in hopes to preserve liberty. This is what we believed was necessary to send our young men off to fight for. This is what we lived and breathed for. This is what we believed America was all about. Unfortunately, the wars we are fighting today are against everything that we thought wars should be about. Today, I can’t say that Americans love the same kind of war they loved back then. Perhaps Mitt Romney was wrong at the final 2012 presidential debate when he said, “I believe when people vote, they vote for peace”.

According to the Nation, Yemeni President Ali Abdullah Saleh received a personal phone call from President Obama to express concerns over the release of Yemeni journalist Abduleh Haider Shaye. Continued on next page… Like this: Like Loading... Antiwar.com - Americans haven’t fully realized that the. 1 - Does The President have Two Much Power. Does The President Wield Too Much Power? Down With the Presidency by Llewellyn H. Rockwell, Jr. Hedges v. Obama. Hedges v. 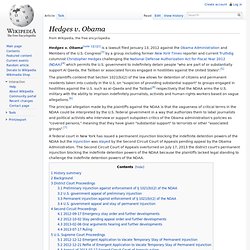 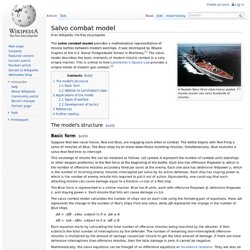 The salvo combat model provides a mathematical representation of missile battles between modern warships. It was developed by Wayne Hughes at the U.S. Naval Postgraduate School in Monterey.[1] The salvo model describes the basic elements of modern missile combat in a very simple manner. This is similar to how Lanchester's Square Law provides a simple model of modern gun combat.[2] The model's structure[edit] Basic form[edit] Suppose that two naval forces, Red and Blue, are engaging each other in combat. This exchange of missile fire can be modeled as follows. 6 - Force Concentration (anabuo Taoka)

Force concentration. Force concentration is the practice of concentrating a military force, so as to bring to bear such overwhelming force against a portion of an enemy force that the disparity between the two forces alone acts as a force multiplier, in favour of the concentrated forces. Mass of decision[edit] Force concentration was integral to the Prussian military operational doctrine of the mass of decision the target of which was to cause disproportionate losses on the enemy, and therefore destroy the enemy's ability to fight. From an empirical examination of past battles the Prussian military theorist Carl von Clausewitz was able to conclude:- ...we may infer, that it is very difficult in the present state of Europe, for the most talented general to gain a victory over an enemy double his strength.

7- Ologopy Competition. Cournot competition. Cournot competition is an economic model used to describe an industry structure in which companies compete on the amount of output they will produce, which they decide on independently of each other and at the same time. It is named after Antoine Augustin Cournot[1] (1801–1877) who was inspired by observing competition in a spring water duopoly. It has the following features: An essential assumption of this model is the "not conjecture" that each firm aims to maximize profits, based on the expectation that its own output decision will not have an effect on the decisions of its rivals. Price is a commonly known decreasing function of total output. All firms know. Oligopoly. An oligopoly is a market form in which a market or industry is dominated by a small number of sellers (oligopolists). Oligopolies can result from various forms of collusion which reduce competition and lead to higher prices for consumers.[1] With few sellers, each oligopolist is likely to be aware of the actions of the others.

The decisions of one firm therefore influence and are influenced by the decisions of other firms. [citation needed] Strategic planning by oligopolists needs to take into account the likely responses of the other market participants. [citation needed] Description[edit] 9 - Rockefella, buying power, trusts and tax loopholes. Theories of Labour. Surplus value & fallin rate of profit. Economics.