In this hard-hitting op-ed, George Arthur. Does CSEC need to kill someone? According to the careers page for Communications Security Establishment Canada (CSEC), “2014 promises to be an exciting year.” 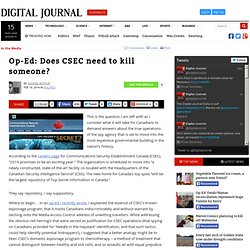 The organization is scheduled to move into “a newly constructed, state-of-the-art facility co-located with the Headquarters of the Canadian Security Intelligence Service” (CSIS). The new home for Canada’s top spies “will be the largest repository of Top Secret information in Canada.” They say repository, I say suppository. Where to begin… In an op-ed I recently wrote, I explained the essence of CSEC’s known espionage program; that it tracks Canadians indiscriminately and without warrant by latching onto the Media Access Control address of unwitting travellers. Read more... Admittedly, my analogy also has faults, as cancer cannot escape the effects of chemotherapy whereas it is frustratingly easy for ‘kidnappers’ or metaphoric ‘needles’ to avoid CSEC’s domestic airport surveillance program. 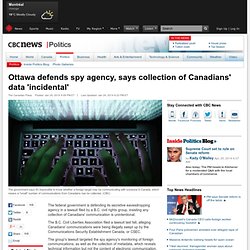 The B.C. Civil Liberties Association filed a lawsuit last fall, alleging Canadians' communications were being illegally swept up by the Communications Security Establishment Canada, or CSEC. The group's lawsuit targeted the spy agency's monitoring of foreign communications, as well as the collection of metadata, which reveals technical information but not the content of electronic communication. But Ottawa has filed a statement of defence that says CSEC follows strict rules that prevent the agency from specifically targeting Canadians and its activities are monitored by an independent commissioner.

The government says it's impossible to know whether a foreign target may be communicating with someone in Canada, which means a "small" number of communications from Canadians has be collected. Thousands of innocent Canadian air travellers monitored and spied on by the government - full independent inquiry urgently needed, says OpenMedia.ca. OpenMedia.ca says Canadians deserve a transparent independent investigation and total overhaul of failed government spy agency CSEC’s oversight, following confirmation that the agency has been monitoring and tracking the precise movements of thousands of Canadians without cause January 30, 2014 – Thousands of law-abiding Canadian air travellers had their private information spied on, and their movements monitored, by government spy agency CSEC. 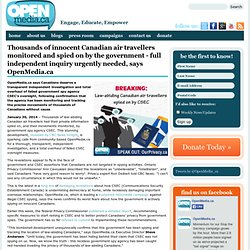 This stunning development, revealed by CBC News tonight, is sparking calls from community-based OpenMedia.ca for a thorough, transparent, independent investigation, and a total overhaul of failed CSEC oversight measures. The revelations appear to fly in the face of government and CSEC assertions that Canadians are not targeted in spying activities. Ontario Privacy Commissioner Ann Cavoukian described the revelations as "unbelievable", "totalitarian", and said Canadians "have very good reason to worry". 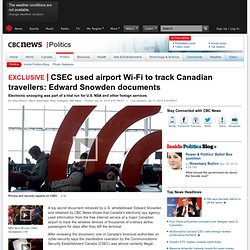 After reviewing the document, one of Canada's foremost authorities on cyber-security says the clandestine operation by the Communications Security Establishment Canada (CSEC) was almost certainly illegal. Read the doc: CSEC's airport Wi-Fi tracking (redacted PDF) Ronald Deibert told CBC News: "I can't see any circumstance in which this would not be unlawful, under current Canadian law, under our Charter, under CSEC's mandates. " The spy agency is supposed to be collecting primarily foreign intelligence by intercepting overseas phone and internet traffic, and is prohibited by law from targeting Canadians or anyone in Canada without a judicial warrant. Black Code A U.S. Canadian government calls Glenn Greenwald ‘a porn spy’ after reports of surveillance. LIVE CHAT NOW: We're suing the government about spying on law-abiding Canadians - Ask us Anything! Thanks to everyone who took the time to join us tonight. 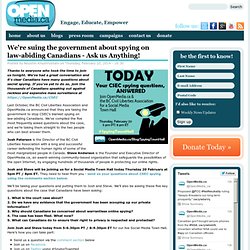 We've had a great conversation and it's clear Canadians have many questions about secret spying. If you've yet to do so, join the thousands of Canadians speaking out against reckless and expensive mass surveillance at Last October, the BC Civil Liberties Association and OpenMedia.ca announced that they are taking the government to stop CSEC’s blanket spying on law-abiding Canadians. We’ve compiled the five most frequently asked questions about the case, and we’re taking them straight to the two people who can best answer them. Josh Paterson is the Director of the BC Civil Liberties Association with a long and successful career defending the human rights of some of the most marginalized people in Canada.

Josh and Steve will be joining us for a Social Media Town Hall today Thursday 20 February at 5pm PT / 8pm ET. We’ll be taking your questions and putting them to Josh and Steve. 1.