Convection, wikipedia. Convection is the concerted, collective movement of groups or aggregates of molecules within fluids (e.g., liquids, gases) and rheids, either through advection or through diffusion or as a combination of both of them. 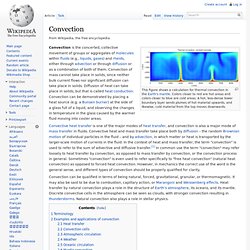 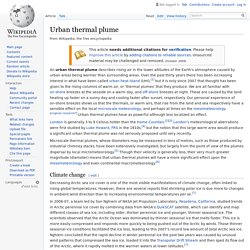 Over the past thirty years there has been increasing interest in what have been called urban heat island (UHI),[1] but it is only since 2007 that thought has been given to the rising columns of warm air, or ‘thermal plumes’ that they produce. We are all familiar with on-shore breezes at the seaside on a warm day, and off-shore breezes at night. These are caused by the land heating up faster on a sunny day and cooling faster after sunset, respectively.

Our personal experience of on-shore breezes shows us that the thermals, or warm airs, that rise from the land and sea respectively have a sensible effect on the local microscale meteorology; and perhaps at times on the mesometeorology. [original research?] Climate change[edit] See also[edit] Global warming References[edit] Jump up ^ Hsu Sheng-I (1981). Turbulent Prandtl number. The turbulent Prandtl number (Prt) is a non-dimensional term defined as the ratio between the momentum eddy diffusivity and the heat transfer eddy diffusivity. 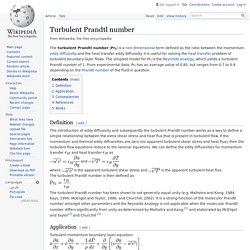 It is useful for solving the heat transfer problem of turbulent boundary layer flows. The simplest model for Prt is the Reynolds analogy, which yields a turbulent Prandtl number of 1. From experimental data, Prt has an average value of 0.85, but ranges from 0.7 to 0.9 depending on the Prandtl number of the fluid in question. Thermosiphon. Thermosyphon circulation in a simple solar water heater Thermosiphon (or thermosyphon) is a method of passive heat exchange, based on natural convection, which circulates a fluid without the necessity of a mechanical pump. 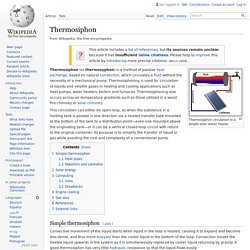 Thermosiphoning is used for circulation of liquids and volatile gases in heating and cooling applications such as heat pumps, water heaters, boilers and furnaces. Thermosiphoning also occurs across air temperature gradients such as those utilized in a wood fire chimney or solar chimney. This circulation can either be open-loop, as when the substance in a holding tank is passed in one direction via a heated transfer tube mounted at the bottom of the tank to a distribution point—even one mounted above the originating tank—or it can be a vertical closed-loop circuit with return to the original container. Thermomagnetic convection. Ferrofluids can be used to transfer heat, since heat and mass transport in such magnetic fluids can be controlled using an external magnetic field. 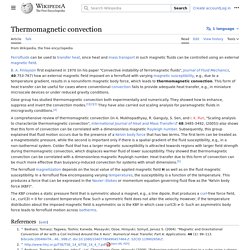 B. A. Finlayson first explained in 1970 (in his paper "Convective instability of ferromagnetic fluids", Journal of Fluid Mechanics, 40:753-767) how an external magnetic field imposed on a ferrofluid with varying magnetic susceptibility, e.g., due to a temperature gradient, results in a nonuniform magnetic body force, which leads to thermomagnetic convection.

Texas Norther. A Texas Norther, also known as a blue norther, is a cold front in the U.S. state of Texas, marked by a sudden drop in temperature (sometimes up to 25 degrees F within one hour), heavy precipitation, and dark blue skies moving across the state. 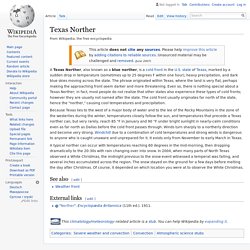 The phrase originated within Texas, where the land is very flat, perhaps making the approaching front seem darker and more threatening. Even so, there is nothing special about a Texas Norther; in fact, most people do not realize that other states also experience these types of cold fronts; however they are usually not named after the state. The cold front usually originates far north of the state, hence the "norther," causing cool temperatures and precipitation. A typical norther can occur with temperatures reaching 60 degrees in the mid-morning, then dropping dramatically to the 20-30s with rain changing over into snow. 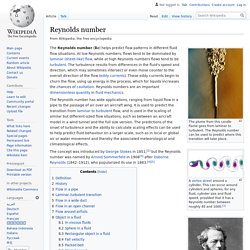 The Reynolds number can be used to predict where this transition will take place. A vortex street around a cylinder. This can occur around cylinders and spheres, for any fluid, cylinder size and fluid speed, provided that the flow has a Reynolds number in the range ~40 to ~1000.[1] Sir George Stokes, introduced Reynolds numbers. Rayleigh number. In fluid mechanics, the Rayleigh number (Ra) for a fluid is a dimensionless number associated with buoyancy-driven flow, also known as free convection or natural convection. 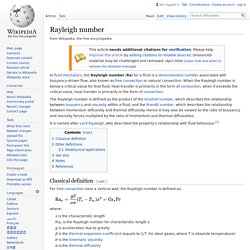 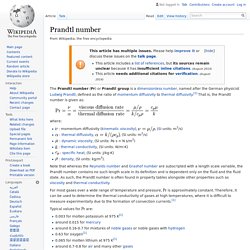 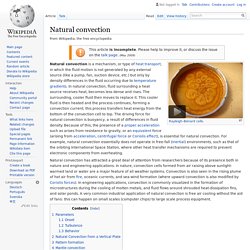 In natural convection, fluid surrounding a heat source receives heat, becomes less dense and rises. The surrounding, cooler fluid then moves to replace it. This cooler fluid is then heated and the process continues, forming a convection current; this process transfers heat energy from the bottom of the convection cell to top. The driving force for natural convection is buoyancy, a result of differences in fluid density. Because of this, the presence of a proper acceleration such as arises from resistance to gravity, or an equivalent force (arising from acceleration, centrifugal force or Coriolis effect), is essential for natural convection. Parameters[edit] Onset[edit] where. Marklund convection. Mechanism[edit] In Marklund's paper, the plasma convects radially inwards towards the center of a cylindrical flux tube. During this convection, the different chemical constituents of the plasma, each having its specific ionization potential, enters into a progressively cooler region.

The plasma constituents will recombine and become neutral, and thus no longer under the influence of the electromagnetic forcing. The ionization potentials will thus determine where the different chemicals will be deposited.[1] This provides an efficient means to accumulate matter within a plasma.[2] In a partially ionized plasma, electromagnetic forces act on the non-ionized material indirectly through the viscosity between the ionized and non-ionized material. Marangoni effect. History[edit] Mechanism[edit] Marangoni effect experimental demonstration Tears of wine show clearly in the shadow of this glass of wine with a 13.5% alcohol content. Mantle convection. This subducted material sinks to a depth of 660 kilometres (410 mi) in the Earth's interior where it is impeded from sinking further, possibly due to a phase change from spinel to silicate perovskite and magnesiowustite, an endothermic reaction.[6] The subducted oceanic crust triggers volcanism, although the basic mechanisms are varied.

Volcanism may occur due to processes that add buoyancy to partially melted mantle causing an upward flow due to a decrease in density of the partial melt. Secondary forms of convection that may result in surface volcanism are postulated to occur as a consequence of intraplate extension[7] and mantle plumes.[1] It is because the mantle can convect that the tectonic plates are able to move around the Earth's surface.[8] Types of convection[edit]

Laboratory oven. Grashof number. Granular convection. Brazil nuts ride on top of other assorted nuts. Convective overturn. Convection zone. Convection oven. A convection oven (also known as a fan-assisted oven or simply a fan oven) is an oven that has fans to circulate air around food.[1] Conventional ovens, which do not have fans, rely primarily on radiation from the oven walls, and to a lesser extent, on natural convection caused by temperature differences within the oven, to transfer heat to food. Convection microwave. A microwave oven with convection feature. Cold hole. Coffee ring effect. Churchill–Bernstein equation. Rayleigh–Bénard convection. Bejan number. Annualized geo solar. Advection. Category:Severe weather and convection.