The Completely Ignored Facts About The Charlie Hebdo Attacks. Paris Attacks: Rage of the Dispossessed. Bio Chris Hedges, whose column is published Mondays on Truthdig , spent nearly two decades as a foreign correspondent in Central America, the Middle East, Africa and the Balkans. 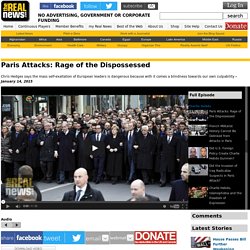 He has reported from more than 50 countries and has worked for The Christian Science Monitor, National Public Radio, The Dallas Morning News and The New York Times, for which he was a foreign correspondent for 15 years. No Outrage For Palestinian Cartoonist Who Was Arrested And Jailed In Israel. Muslims are not the only ones to send men with guns to come after journalists and political cartoonists. 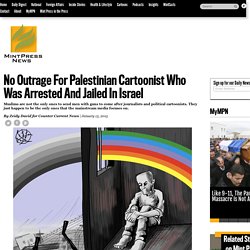 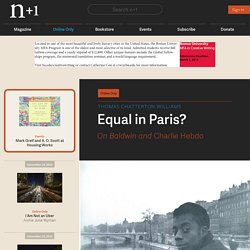 For Baldwin, Faulkner’s depictions of blacks had far less to do with them as people than with “the torment of their creator” who was “seeking to exorcise a history that is also a curse.” In these nightmarish days in Paris since the astonishing massacre of cartoonists, black and Arab police officers, and random hostages in a Jewish épicerie, it is Baldwin whose words echo loudest in my mind—more than Voltaire or Rushdie or Christopher Hitchens or any other exemplar of satire and blasphemy to be repeatedly quoted (and misquoted) in the press and on social media. On not understanding "Charlie:" Why many smart people are getting it wrong. Many smart people are getting a flawed picture of Charlie Hebdo. 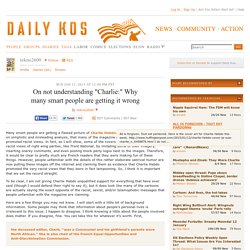 They are concluding, based on simplistic and misleading analysis, that many of the magazine covers and cartoons promoted racist views. In fact, as I will show, some of the covers elaborately lampooned racist views of right wing parties, like Front National, by imitating some of their imagery, inserting snarky comments, and even posting mock party logos next to the images. Therefore, it would be clear to pretty much any French readers that they were making fun of these things. However, people unfamiliar with the details of this rather elaborate satirical humor are now pulling these images off the internet and claiming them as evidence that Charlie Hebdo promoted the very racist views that they were in fact lampooning. So, I think it is important that we set the record straight. Here are a few things you may not know. The deceased editor, Charb, "was a Communist and his girlfriend's parents were North African.

" Dear US followers. CHARLIE HEBDO: Not racist? If you say so... Thursday 5 December 2013 translated by Daphne Lawless He worked there from 1992 to 2001, before walking out, angered by “the dictatorial behaviour and corrupt promotion practices” of a certain Philippe Val [former CH editor - trans.] 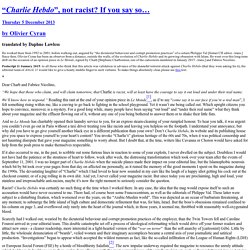 Charlie Hebdo Shootings - Censored Video. I'm going to show you some footage of the Charlie Hebdo shootings which has been restricted or taken down from a number of websites. 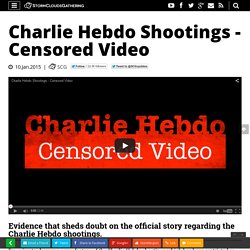 As you will see it contains no blood, gore or graphic violence. It does however punch a major hole in the official story. You can draw your own conclusions. The Charlie Hebdo attack was a strike against free speech. So why is the response more surveillance? As politicians drape themselves in the flag of free speech and freedom of the press in response to the tragic murder of Charlie Hebdo cartoonists, they’ve also quickly moved to stifle the same rights they claim to love. 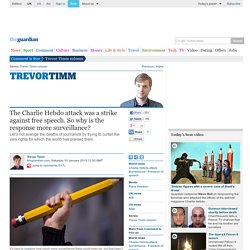 Government officials on both sides of the Atlantic are now renewing their efforts to stop NSA reform as they support free speech-chilling surveillance laws that will affect millions of citizens that have never been accused of terrorism. This is an entirely predictable response – as civil liberties advocates noted shortly after Wednesday’s tragic attack, the threat of terrorism has led to draconian laws all over the world over the last decade – but this time around, the speed and breadth by which politicians praised free speech out of one side of their mouths, while moving to curtail rights out of the other, has been quite breathtaking. UK prime minister David Cameron immediately expressed solidarity with “defending the freedom of the press”. Charlie Hebdo (Irony & Hypocracy) David Cameron's Ban On Encryption Is Bad For The Internet.

Earlier today, British Prime Minister David Cameron announced his plan to revive legislation that would allow the UK government to ban applications that use end-to-end encryption to ensure user security. 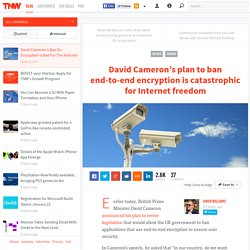 In Cameron’s speech, he asked that “in our country, do we want to allow a means of communication between people which we cannot read?” The answer: yes, we do. If the pledge to revive the legislation were to come into effect, services like WhatsApp, iMessage, Telegram, Cyberdust and more would ultimately need to make major changes to their services to ensure they could function in the UK. Depending on the specific wording, the law could extend to almost any encrypted service that the government finds worth targeting. David Cameron, via Shutterstock. 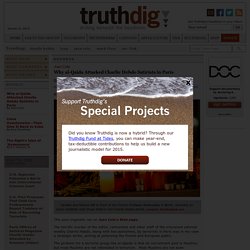 The horrific murder of the editor, cartoonists and other staff of the irreverent satirical weekly Charlie Hebdo, along with two policemen, by terrorists in Paris was in my view a strategic strike, aiming at polarizing the French and European public. The problem for a terrorist group like al-Qaeda is that its recruitment pool is Muslims, but most Muslims are not interested in terrorism. Most Muslims are not even interested in politics, much less political Islam. France is a country of 66 million, of which about 5 million is of Muslim heritage. Al-Qaeda wants to mentally colonize French Muslims, but faces a wall of disinterest. Donald Trump Hits An All-Time-Low With His Disgraceful Response To The Paris Shootings (TWEETS, VIDEO)

While Paris, France and a horrified world figures out how to come together in the face of the horrific attacks on a Paris magazine that left 10 journalists and two policemen dead – Donald Trump is gloating. 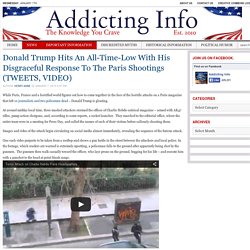 At around midday local time, three masked attackers stormed the offices of Charlie Hebdo satirical magazine – armed with AK47 rifles, pump action shotguns, and, according to some reports, a rocket launcher. They marched to the editorial office, where the entire team were in a meeting for Press Day, and called the names of each of their victims before callously shooting them.

Images and video of the attack begin circulating on social media almost immediately, revealing the sequence of the furious attack. One such video purports to be taken from a rooftop and shows a gun battle in the street between the attackers and local police. #OpCharlieHebdo: Anonymous Declares War on Jihadists. Juan Cole: The Muslims’ War on Terror: Yes, They’re Condemning the Paris Attacks - Juan Cole. This post originally ran on Juan Cole’s Web page. When American commentators like Carl Bernstein complain that Muslim authorities have not sufficiently denounced the terrorist attack on the Charlie Hebdo staff in Paris, they show a profound ignorance of the current situation in the Middle East. The fact is that both governments of Muslim-majority countries and the chief religious institutions have been engaged in a vigorous war on religious extremism for some time. Egypt has gone too far in this direction, criminalizing the activist members of the Muslim Brotherhood.

But it is also committing troops to fight extremists in Sinai. Egyptian acquaintances of mine in Cairo say that it has become unpleasant to wear a beard there (for long a sign of religious commitment). Egypt’s president Abdel Fattah al-Sisi spoke to an audience of clerics at the Department of Religious Endowments a few days ago. Sisi has put thousands of Muslim fundamentalists in prison, most of them certainly not terrorists. 4 Big Unanswered Questions About the Charlie Hebdo Attacks in Paris. French riot officers patrolling north of Paris last Thursday.Thibault Camus/AP In the wake of last week's terrorist attacks in Paris, information has slowly emerged about the attackers, their alleged affiliations with Al Qaeda in the Arabian Peninsula and the Islamic State, and their path to radicalization. But many unanswered questions remain. Here are some key unknowns:

Rudy Giuliani Uses Charlie Hebdo Tragedy To Demand America Become A Police State. During an appearance on Fox & Friends Thursday, former New York City Mayor Rudy Giuliani used the terrorist attack on a French newspaper to insist that the United States needs to have a police presence inside all Muslim places of worship. Giuliani and the hosts also used the segment to criticize both President Obama and current NYC Mayor Bill de Blasio for their apparent unwillingness to condemn the religion of Islam for the attacks and fully embrace Islamophobia. Specifically, the former Republican Presidential candidate said de Blasio made an “irrational” act by pulling police out of Muslim mosques in New York. It is no surprise that Fox News is using a tragedy to stoke xenophobic fears within its base audience.

That is, of course, their stock and trade. Still, the irresponsible and hateful rhetoric coming from the network over these past 24 hours is shocking, even for them. Internet Commenters: This Is Why Other Muslims and I Won't Apologize for the Charlie Hebdo Attacks. A small selection of online comments arguing that moderate Muslims should apologize for the actions of extremists (Background photo by Chris Bethell) This article originally appeared on VICE UK. Charlie Hebdo and the hypocrisy of pencils. It was Herald Sun cartoonist Mark Knight who tipped me over the edge. To be fair, he wasn’t wholly responsible. If it wasn’t for all the lunacy that preceded him, I probably would have dismissed his cartoon as just another Herald Sun atrocity, more a piece of Murdoch-madness to be mocked rather than trigger for outrage. Jon Stewart pays tribute to Charlie Hebdo victims: Comedy ‘shouldn’t be an act of courage’

'Daily Show' host Jon Stewart on Jan. 7, 2015 [YouTube] The problem with “Je Suis Charlie”: That kind of solidarity comes with baggage. Photos du journal - Marcus Didier Africanus. Chris Hedges: A Message From the Dispossessed - Chris Hedges - Truthdig. (Page 2) “It is a sad state of affairs when Liberty means the freedom to insult, demean and mock people’s most sacred concepts,” the Islamic scholar Hamza Yusuf, an American who lives in California, told me in an email.

In Solidarity With a Free Press: Some More Blasphemous Cartoons. Defending free speech and free press rights, which typically means defending the right to disseminate the very ideas society finds most repellent, has been one of my principal passions for the last 20 years: previously as a lawyer and now as a journalist. Charlie Hebdo, janvier 2015 : en parler avec les jeunes.