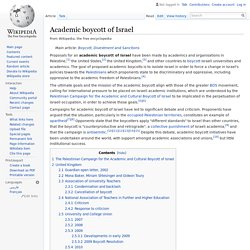 The goal of proposed academic boycotts is to isolate Israel in order to force a change in Israel's policies towards the Palestinians which proponents state to be discriminatory and oppressive, including oppressive to the academic freedom of Palestinians.[4] The ultimate goals and the mission of the academic boycott align with those of the greater BDS movement, calling for international pressure to be placed on Israeli academic institutions, which are understood by the Palestinian Campaign for the Academic and Cultural Boycott of Israel to be implicated in the perpetuation of Israeli occupation, in order to achieve those goals.[5][6] Campaigns for academic boycott of Israel have led to significant debate and criticism. 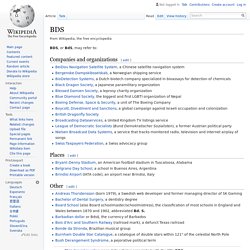 Boycott, Divestment and Sanctions (wikipedia) Logo for the BDS movement. 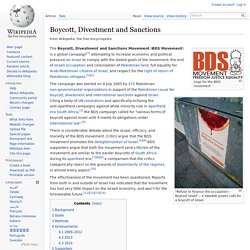 Boycotts of Israel (wikipedia) "Refuse to finance the occupation – Boycott Israel"— A Swedish poster calls for a boycott of Israel. 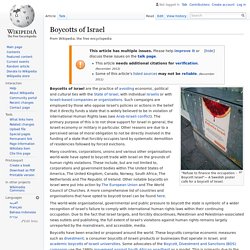 Boycotts of Israel are the practice of avoiding economic, political and cultural ties with the State of Israel, with individual Israelis or with Israeli-based companies or organizations. Such campaigns are employed by those who oppose Israel's policies or actions in the belief that it directly funds a state that is widely believed to be in violation of international Human Rights laws (see Arab-Israeli conflict). The primary purpose of this is to not show support for Israel in general, the Israeli economy or military in particular. Other reasons are due to a perceived sense of moral obligation to not be directly involved in the funding of a state that forcibly occupies land by systematic demolition of residencies followed by forced evictions. 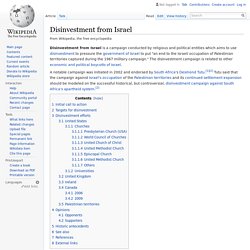 " The disinvestment campaign is related to other economic and political boycotts of Israel. A notable campaign was initiated in 2002 and endorsed by South Africa's Desmond Tutu.[1][2] Tutu said that the campaign against Israel's occupation of the Palestinian territories and its continued settlement expansion should be modeled on the successful historical, but controversial, disinvestment campaign against South Africa's apartheid system.[2] Initial call to action[edit] "If apartheid ended, so can this occupation, but the moral force and international pressure will have to be just as determined.

The current divestment effort is the first, though certainly not the only, necessary move in that direction Disinvestment efforts[edit] Omar Barghouti. Omar Barghouti (born 1964) is a founding committee member of the Palestinian Campaign for the Academic and Cultural Boycott of Israel (PACBI)[1] and a co-founder of the Boycott, Divestment and Sanctions movement.[2] Biography[edit] Barghouti was born in Qatar, grew up in Egypt and later moved to Jaffa in Israel as an adult. 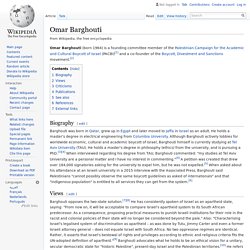 He holds a master's degree in electrical engineering from Columbia University. Although Barghouti actively lobbies for worldwide economic, cultural and academic boycott of Israel, Barghouti himself is currently studying at Tel Aviv University (TAU). He holds a master's degree in philosophy (ethics) from the university, and is pursuing a PhD.[3][4] When interviewed regarding his degree from TAU, Barghouti commented: "my studies at Tel Aviv University are a personal matter and I have no interest in commenting Views[edit] Criticisms[edit] Roberta Seid describes Barghouti's speech at UCLA as 'bring[ing] hate' and 'anti-Israel show'.

Publications[edit] Barghouti, Omar (2011). (1:06:25) Israel HAS Killed Americans From The Crew Of The USS LIBERTY To Rachel Corrie!" Boycott, Divestment and Sanctions (BDS) Movement. Censorship in the Isreli Palistine conflict. Fench Censorship & Criminilizations of the BDS Movement. The Isreal Palistine Conflict.