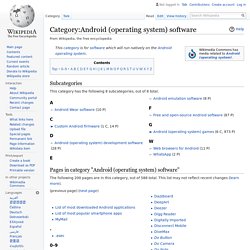 Pages in category "Android (operating system) software" The following 200 pages are in this category, out of 588 total. This list may not reflect recent changes (learn more). To sort (Android)

Andro-Pup. This community is going thru another of its evolutions. 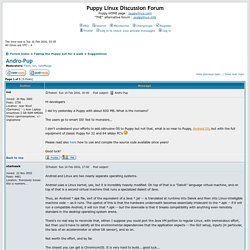 More and more members are either coming to Puppyland already users of Touch hand-held devices OR experienced members who are acquiring/have smartDevices. These are the portions of the community which will be envisioning the integration of Android and Linux thru PUPs Assuming you have a touch-screen PC, try the distro mentioned in the opening post. Then on your touch PC; try Puppy's Just-Lighthouse, followed by FATDOG V7+. Do things by touching your screen so that you can articulate what is different in the 3 implementations for user uses. These 3 will provide you the understanding of what these are and the differences of implementations useful for clarity. The x86 implementations are hampered by the missing radios that are standard in smart hand-held devices. Should there become parity in radios for both hand-helds and x86 PCs, will we begin to envision a true convergence. How to Back Up an Android Device. How much important information do you keep on your Android? 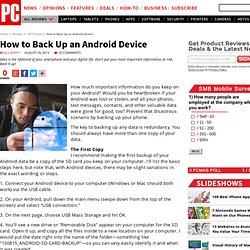 Would you be heartbroken if your Android was lost or stolen, and all your photos, text messages, contacts, and other valuable data were gone for good, too? Prevent that disastrous scenario by backing up your phone. The key to backing up any data is redundancy. You should always have more than one copy of your data. The future for Microsoft, Android and Windows Phone – analysis. To suggest that Microsoft should abandon Windows Phone and fork Android (more precisely, fork the open source Android code) to put its own services where Google’s would be found is of course controversial. 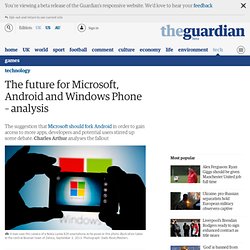 But suggesting it certainly stirred some debate - and lots of sensible suggestions. The key questions, as we survey the discussion, are:• Is it actually possible to do this? What obstacles are there? • What might Microsoft’s managers think of such a plan? Nothing to worry about! Of course, there were plenty of people ready to say that things are going fine for Windows Phone as it is. Backup nearly everything on your Android phone with Super Backup. Helium (Premium) Galaxy S7 Edge: How to Set Up Edge Screen. The Galaxy S7 Edge packs more functions on its dual curved sides than its predecessors, and you'll want to make full use of it. 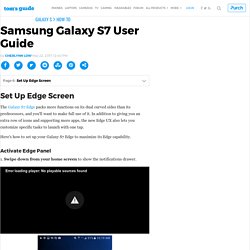 In addition to giving you an extra row of icons and supporting more apps, the new Edge UX also lets you customize specific tasks to launch with one tap. Here's how to set up your Galaxy S7 Edge to maximize its Edge capability. Activate Edge Panel 1. Swipe down from your home screen to show the notifications drawer. 2. 3. 4. Configure Edge Handle The Edge handle is a hotspot that you swipe in from to pull up your predefined shortcuts. 1. 2. 3. How to Change Galaxy S7 Screen Resolution After Nougat Update. Samsung has finally started to release Android 7.0 Nougat to Galaxy S7 and S7 edge, its two latest flagship phones. 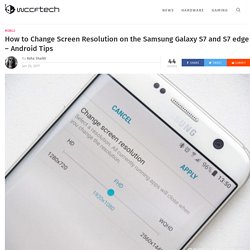 Nougat brings a number of new features and improvements to the devices, promising to improve your user experience while offering you even more capabilities. These new improvements include the ability to tweak your phone’s screen resolution. Now, with a new Settings menu, you can change Galaxy S7 screen resolution. The Nougat menu on Galaxy S7 and S7 edge allows you to set the screen resolution to FHD, WQHD, or HD – the lowest of all. Samsung Galaxy S6 Edge Tips and Tricks. How to switch the position of the navigation buttons on the Galaxy S8. I put my Galaxy S8 down, flip it and reverse it.

The Galaxy S8 is the first Samsung phone with on-screen navigation buttons, which is a big change for the company, and its users! By default, though, the Galaxy S8 puts those virtual buttons in the same position as Samsung's older phones, with the "back" button to the right of the "home" button, and the "multitasking" button to the left.