Alternator. Early 20th-century alternator made in Budapest An alternator is a generator which converts mechanical energy to electrical energy in the form of alternating current. 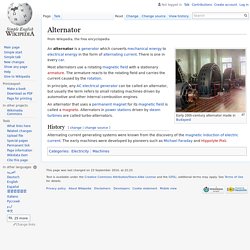 There is one in every car. Most alternators use a rotating magnetic field with a stationary armature. The armature reacts to the rotating field and carries the current caused by the rotation. In principle, any AC electrical generator can be called an alternator, but usually the term refers to small rotating machines driven by automotive and other internal combustion engines. An alternator that uses a permanent magnet for its magnetic field is called a magneto. Alexanderson alternator - Wikipedia. An Alexanderson alternator is a rotating machine invented by Ernst Alexanderson in 1904 for the generation of high-frequency alternating current for use as a radio transmitter. 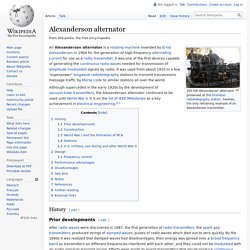 It was one of the first devices capable of generating the continuous radio waves needed for transmission of amplitude modulation (sound) by radio. It was used from about 1910 in a few "superpower" longwave radiotelegraphy stations to transmit transoceanic message traffic by Morse code to similar stations all over the world. Although obsolete by the early 1920s due to the development of vacuum-tube transmitters, the Alexanderson alternator continued to be used until World War 2. It is on the list of IEEE Milestones as a key achievement in electrical engineering.[1] History[edit] Prior developments[edit] Alexanderson 200-kW motor-alternator set installed at the US Navy's New Brunswick, NJ station, 1920. Construction[edit] Alexanderson would receive a patent in 1911 for his device. Flux switching alternator - Wikipedia. Alternator with six-pole rotor A flux switching alternator or inductor alternator[citation needed] is a form of high-speed alternator, an AC electrical generator, intended for direct drive by a turbine. 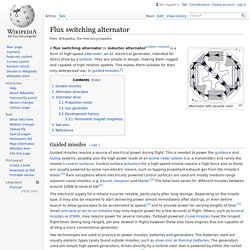 They are simple in design, making them rugged and capable of high rotation speeds. This makes them suitable for their only widespread use, in guided missiles. [i] Guided missiles[edit] The electrical supply for a missile must be reliable, particularly after long storage. Two technologies are used in practice to power missiles: batteries and generators. Goldschmidt alternator - Wikipedia. Linear alternator - Wikipedia. A linear alternator is essentially a linear motor used as an electrical generator. 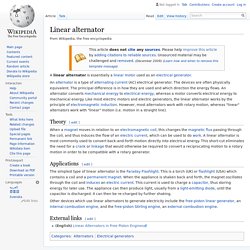 Like most electric motors and electric generators, the linear alternator works by the principle of electromagnetic induction. Theory[edit] Applications[edit] The simplest type of linear alternator is the Faraday Flashlight. Other devices which use linear alternators to generate electricity include the free-piston linear generator, an internal combustion engine, and the free-piston Stirling engine, an external combustion engine. External links[edit] (English) Linear Alternators in Free Piston Engines. Alternator (automotive) - Wikipedia. Alternator (silver) mounted on a V8 engine Alternators are used in modern automobiles to charge the battery and to power the electrical system when its engine is running. 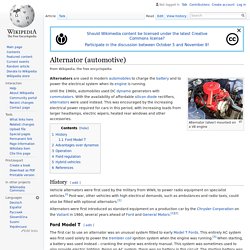 When the Model T was upgraded with electric lighting from the factory, a conventional dynamo was installed instead. This then permitted battery charging as well. Cut-away of an alternator, showing the claw-pole construction; two of the wedge-shaped field poles, alternating N and S, are visible in the centre and the stationary armature winding is visible at the top and bottom of the opening. The belt and pulley at the right hand end drives the alternator. Despite their names, both 'DC generators' (or 'dynamos') and 'alternators' initially produce alternating current. Brushless versions of these type alternators are also common in larger machinery such as highway trucks and earthmoving machinery. The field windings are supplied with power from the battery via the ignition switch and regulator. Alternator. History[edit] In what is considered the first industrial use of alternating current in 1891, workmen pose with a Westinghouse alternator at the Ames Hydroelectric Generating Plant. 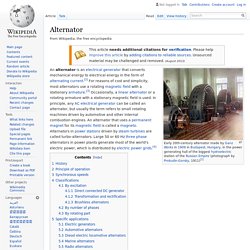 This alternator was used as a generator producing 3000 volt, 133 hertz, single-phase AC, and an identical one 3 miles away was used as an AC motor.[5] Alternating current generating systems were known in simple forms from the discovery of the magnetic induction of electric current in the 1830s. The early machines were developed by pioneers such as Michael Faraday and Hippolyte Pixii.