I am a student at Old Dominion University (Norfolk, VA) and I work as a bar back at Top Golf in Virginia Beach.

Drug Abuse in College. IT was finals week at Columbia University and Angela needed a miracle. 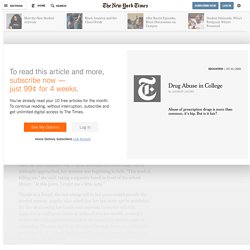 Like many of her classmates, Angela, a bleary-eyed junior, had already pulled a pair of all-nighters to get through a paper on "Finnegans Wake," a French test and an exam for her music humanities class. All that remained was a Latin American literature final, but as midnight approached, her stamina was beginning to fade. "This week is killing me," she said, taking a cigarette break in front of the school library. "At this point, I could use a little help. " Thanks to a friend, the tiny orange pill in her purse would provide the needed miracle. Pros and Cons of ADHD Medication. The drugs usually prescribed to treat ADHD are generally effective and safe. 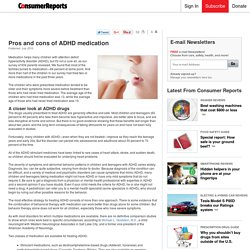 Most children and teenagers (60 percent to 80 percent) who take them become less hyperactive and impulsive, are better able to focus, and are less disruptive at home and school. But there is no good evidence showing that these benefits last longer than about two years, and the long-term consequences of taking stimulants for years on end have not been fully evaluated in studies. Fortunately, many children with ADHD—even when they are not treated—improve as they reach the teenage years and early 20s. But the disorder can persist into adolescence and adulthood about 30 percent to 70 percent of the time. All of the ADHD stimulant medicines have been linked to rare cases of heart attack, stroke, and sudden death, so children should first be evaluated for underlying heart problems. The Advantages And Disadvantages Of Adderall. Introduction Hernandez (2015) states “You’re trying to focus on your work, but stray thoughts bombard your brain and you can’t think straight. 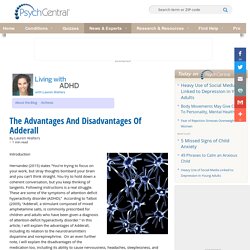 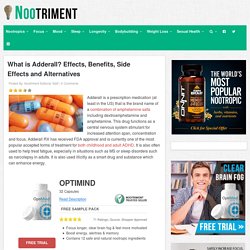 Effects, Benefits, Side Effects and Alternatives Posted By: Nootriment Editorial Staff | 0 Comments Adderall is a prescription medication (at least in the US) that is the brand name of a combination of amphetamine salts including dextroamphetamine and amphetamine. This drug functions as a central nervous system stimulant for increased attention span, concentration and focus. Adderall RX has received FDA approval and is currently one of the most popular accepted forms of treatment for both childhood and adult ADHD. Optimind 32 Capsules Read Description 71 Ratings | Source: Shopper Approved Focus longer, clear brain fog & feel more motivatedBoost energy, alertnes & memoryContains 12 safe and natural nootropic ingredients Expand Product Reviews.

Adderall gives unfair advantage, causes side effects. Whether using Adderall as a study aid should be considered cheating is a question many students have trouble answering, but those with a prescription can feel like they are the ones being cheated. 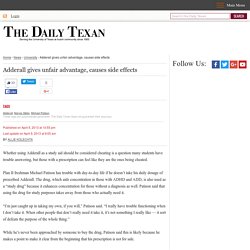 Plan II freshman Michael Patison has trouble with day-to-day life if he doesn’t take his daily dosage of prescribed Adderall. The drug, which aids concentration in those with ADHD and ADD, is also used as a “study drug” because it enhances concentration for those without a diagnosis as well. Patison said that using the drug for study purposes takes away from those who actually need it. “I’m just caught up in taking my own, if you will,” Patison said. “I really have trouble functioning when I don’t take it.

While he’s never been approached by someone to buy the drug, Patison said this is likely because he makes a point to make it clear from the beginning that his prescription is not for sale. “Anyone who knows that I do take it, they pretty much know [I won’t sell it],” Patison said. Adderall for All: A Defense of Pediatric Neuroenhancement. I argue that young patients should be able to access neuroenhancing drugs without a diagnosis of ADHD. 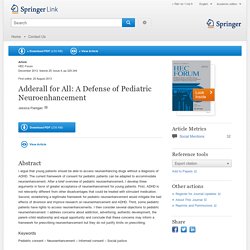 The current framework of consent for pediatric patients can be adapted to accommodate neuroenhancement. After a brief overview of pediatric neuroenhancement, I develop three arguments in favor of greater acceptance of neuroenhancement for young patients. First, ADHD is not relevantly different from other disadvantages that could be treated with stimulant medication. ADHD in Adults: Current Treatment Trends with Consideration... : Journal of Psychiatric Practice® Objective: To review the literature describing impairments in educational, occupational, and social functioning in adults with attentiondeficit/hyperactivity disorder (ADHD), current treatment trends, and factors that may influence the abuse potential of long-acting medications used to treat ADHD in adults. 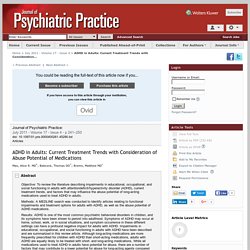 An Update on Central Nervous System Stimulant Formulations in Children and Adolescents with Attention-Deficit/Hyperactivity Disorder. OBJECTIVE To review recent literature on the different stimulant preparations regarding efficacy and safety in children and adolescents with attention-deficit/ hyperactivity disorder (ADHD) and describe advantages and disadvantages of the many available dosage formulations. 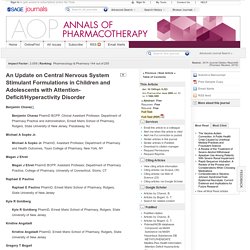 DATA SOURCES Literature retrieval was performed through PubMed/MEDLINE (2005–December 2008) using the terms methylphenidate, amphetamines, central nervous system stimulants, and attention-deficit/hyperactivity disorder. In addition, reference citations from publications identified were reviewed and drug manufacturers were contacted for any possible additional references. STUDY SELECTION AND DATA EXTRACTION Double-blind clinical trials found using the search criteria listed above were included for review. Open-label studies and studies prior to 2005 were included if no double-blind trials were published for that formulation within the time period reviewed.