How I went paperless with Hazel and Evernote. Evernote has become my paperless filing cabinet for everything from receipts to tax documents. 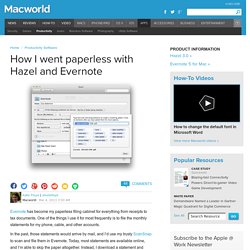 One of the things I use it for most frequently is to file the monthly statements for my phone, cable, and other accounts. In the past, those statements would arrive by mail, and I’d use my trusty ScanSnap to scan and file them in Evernote. Today, most statements are available online, and I’m able to skip the paper altogether. Instead, I download a statement and import it into the appropriate Evernote notebook along with the appropriate tags.

Then I just delete the original. That process isn’t necessarily difficult, but it is tedious and repetitive. The key to that automation is Hazel, a utility and System Preferences pane that can monitor a specified set of folders and perform actions on files in those folders based on rules you’ve defined. [mac] Hazel Automation to Name Files and Upload Notes - Mac Help. Osx - Getting Mac Hazel to e-mail .lnk, doc, and .xls files to my evernote account. Effortless Paperless Nirvana With Mail, Hazel and Evernote. With the relentless onslaught of the digital era, paperless systems have been gaining increasing traction and relevance. 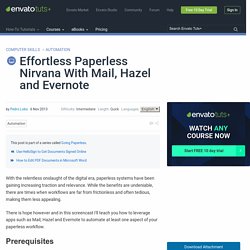 While the benefits are undeniable, there are times when workflows are far from frictionless and often tedious, making them less appealing. There is hope however and in this screencast I'll teach you how to leverage apps such as Mail, Hazel and Evernote to automate at least one aspect of your paperless workflow. You'll need: OS X's Mail.app;A copy of Hazel;A copy of Evernote (Mac App Store or Direct Download). Effortless Paperless Nirvana With Mail, Hazel and Evernote The initial step is to set up a mail rule that will filter any email from your utility company. Click on Add Rule, give the rule a meaningful name and then choose some conditions. 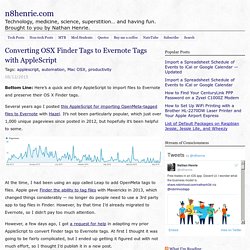 Several years ago I posted this AppleScript for importing OpenMeta-tagged files to Evernote with Hazel. It’s not been particularly popular, which just over 1,000 unique pageviews since posted in 2012, but hopefully it’s been helpful to some. At the time, I had been using an app called Leap to add OpenMeta tags to files. Apple gave Finder the ability to tag files with Mavericks in 2013, which changed things considerably — no longer do people need to use a 3rd party app to tag files in Finder.

NOTE: My Hazel Workflow Ideas. Sync Mac Productivity Hacks with Hazel. Sync Hacks is a column dedicated to exploring new applications for BitTorrent Sync, as built by users like you. 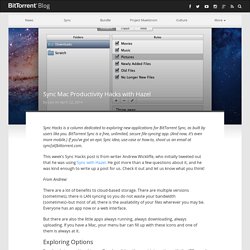 BitTorrent Sync is a free, unlimited, secure file-syncing app. (And now, it’s even more mobile.) If you’ve got an epic Sync idea, use-case or how-to, shoot us an email at sync[at]bittorrent.com. This week’s Sync Hacks post is from writer Andrew Wickliffe, who initially tweeted out that he was using Sync with Hazel. He got more than a few questions about it, and he was kind enough to write up a post for us. From Andrew: Syncing the Inbox Between Macs With Dropbox and Hazel 3. In the two previous tutorials in this series on Hazel—the automated file management app from Noodlesoft—I showed you how to create an Inbox and use rules to keep a Mac clutter free, and then how to add more rules to make the set up even more powerful. 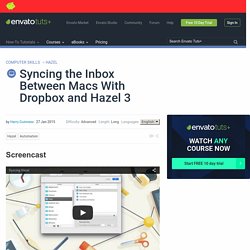 In this tutorial I will show how to sync the files in the Inbox between two Macs, each with their own Inbox setup. To be able to use the information in this tutorial you will need to have read, and implemented, the following three articles on Tuts+. You need two Macs to sync the Inbox between. I have my Hackintosh and my Macbook, though any two Macs will do. You also need a copy of Hazel 3—available from the Noodlesoft website for $29—on both Macs. The full setup covered in this, and the previous tutorials, takes a few hours to get working properly.

Finally, you need Dropbox, or another folder syncing app, installed on the two Macs. You can download the rules I use from the sidebar on the right. How To Use Hazel Rules to Increase Productivity. The basic premise of the personal computer is to make its user’s life easier. 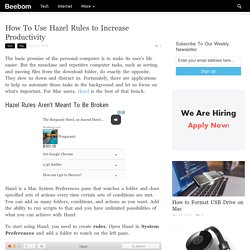 But the mundane and repetitive computer tasks, such as sorting and moving files from the download folder, do exactly the opposite. They slow us down and distract us. Fortunately, there are applications to help us automate those tasks in the background and let us focus on what’s important. For Mac users, Hazel is the best of that bunch. Hazel Rules Aren’t Meant To Be Broken Hazel is a Mac System Preferences pane that watches a folder and does specified sets of actions every time certain sets of conditions are met.