I am a criminal law attorney and the co-founder of Grand Canyon Law Group, located in Gilbert, AZ. About my education, I graduated from Brigham Young University Marriott School of Business. Following that, I received my Juris Doctorate from Sandra Day O'Connor College of Law, Arizona State University. Soon after, I worked and trained alongside the prosecutors in cases, first as a Rule 38 prosecutor with the Scottsdale Prosecutor’s Office, and later as Deputy County Attorney with Maricopa County Attorney’s Office. My practice area focus on criminal laws that mainly include Assault & Battery crimes, Drug & Alcohol Violations, Expungement, Felony, Theft, Traffic Violations, Criminal Domestic Violence, DUI/DW, Motor Vehicle Accidents, and more. Grand Canyon Law Group provides smart and aggressive representation for people charged with a crime or injured in an accident. We understand that this is a foreign process that can be confusing and frightening for most of our clients. That’s why we take the time to explain the options and potential outcomes, make a recommendation, then pursue the decision of our clients.

Weapon Offense Charges. If someone commits a gun violation in Arizona, they could be ordered to spend a significant amount of time in jail, pay hefty fines, and face other serious ramifications that come with having a criminal record. 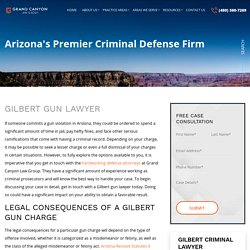 Depending on your charge, it may be possible to seek a lesser charge or even a full dismissal of your charges in certain situations. However, to fully explore the options available to you, it is imperative that you get in touch with the hardworking defense attorneys at Grand Canyon Law Group. Gilbert Domestic Violence Lawyer. Disagreements happen in every relationship. 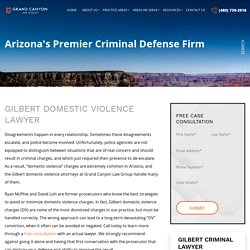 Sometimes these disagreements escalate, and police become involved. Unfortunately, police agencies are not equipped to distinguish between situations that are of real concern and should result in criminal charges, and which just required their presence to de-escalate. As a result, “domestic violence” charges are extremely common in Arizona, and the Gilbert domestic violence attorneys at Grand Canyon Law Group handle many of them. Ryan McPhie and David Lish are former prosecutors who know the best strategies to avoid or minimize domestic violence charges.

Ryan McPhie Attorney. Charges for Violating the Rules of the Road. Penalties for traffic offenses in Arizona range all the way from fines to life in prison. 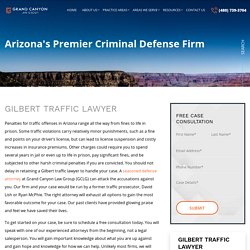 Some traffic violations carry relatively minor punishments, such as a fine and points on your driver’s license, but can lead to license suspension and costly increases in insurance premiums. Charges for Stealing Personal Property. Theft crimes are among the more common crimes accused and charged in Arizona. 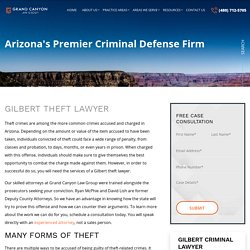 Depending on the amount or value of the item accused to have been taken, individuals convicted of theft could face a wide range of penalty, from classes and probation, to days, months, or even years in prison. When charged with this offense, individuals should make sure to give themselves the best opportunity to combat the charge made against them. However, in order to successful do so, you will need the services of a Gilbert theft lawyer. Our skilled attorneys at Grand Canyon Law Group were trained alongside the prosecutors seeking your conviction. Ryan McPhie and David Lish are former Deputy County Attorneys.

Drinking and Driving Offenses. Arizona in known to have some of the harshest laws in the nation against Driving under the Influence (DUI). 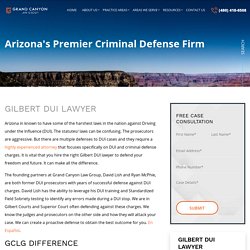 The statutes/ laws can be confusing. The prosecutors are aggressive. But there are multiple defenses to DUI cases and they require a highly experienced attorney that focuses specifically on DUI and criminal defense charges. It is vital that you hire the right Gilbert DUI lawyer to defend your freedom and future. It can make all the difference. The founding partners at Grand Canyon Law Group, David Lish and Ryan McPhie, are both former DUI prosecutors with years of successful defense against DUI charges. GCLG Difference Former DUI prosecutorsFlat fee- NO TRIAL FEE: Know that our advice is based on what is best for your case, not your attorney trying to squeeze extra fees from you.Free consultation with an actual lawyer: Many firms use legal salespeople and offload as much of your case as they can to non-legal staff. 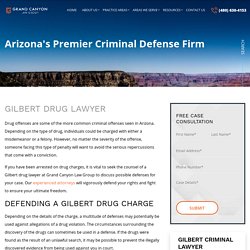 Depending on the type of drug, individuals could be charged with either a misdemeanor or a felony. However, no matter the severity of the offense, someone facing this type of penalty will want to avoid the serious repercussions that come with a conviction. If you have been arrested on drug charges, it is vital to seek the counsel of a Gilbert drug lawyer at Grand Canyon Law Group to discuss possible defenses for your case. Our experienced attorneys will vigorously defend your rights and fight to ensure your ultimate freedom. Defending a Gilbert Drug Charge Depending on the details of the charge, a multitude of defenses may potentially be used against allegations of a drug violation. Additionally, whether the accused was aware of the presence of the drug is a critical element that can favor the defense. Common Drug Charges and Sentences. Charges for Violence & Intimidation. When a person is charged with assault, they must do everything possible to avoid suffering the harsh consequences that comes with a conviction. 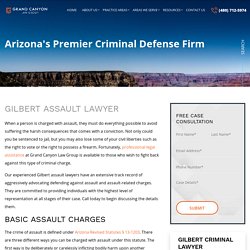 Not only could you be sentenced to jail, but you may also lose some of your civil liberties such as the right to vote or the right to possess a firearm. Fortunately, professional legal assistance at Grand Canyon Law Group is available to those who wish to fight back against this type of criminal charge. Our experienced Gilbert assault lawyers have an extensive track record of aggressively advocating defending against assault and assault-related charges. They are committed to providing individuals with the highest level of representation at all stages of their case. Call today to begin discussing the details them. Basic Assault Charges The crime of assault is defined under Arizona Revised Statutes § 13-1203. When is an Assault Offense Considered Aggravated? Gilbert Criminal Lawyer - Grand Canyon Law Group.

If you confront criminal charges, you must act quickly, regardless of the severity of the charges. 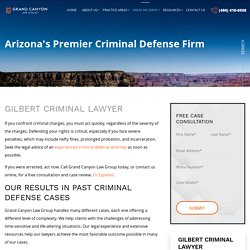 Defending your rights is critical, especially if you face severe penalties, which may include hefty fines, prolonged probation, and incarceration. Seek the legal advice of an experienced criminal defense attorney as soon as possible. If you were arrested, act now. Call Grand Canyon Law Group today, or contact us online, for a free consultation and case review.