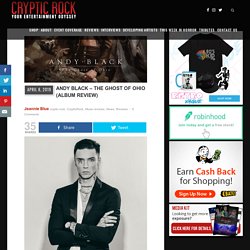 Now, he’s also The Ghost of Ohio, a smalltown boy taking a chance on life in the big city to chase his dreams. His semi-autobiographical sonic tale arrives Friday, April 12, 2019, via Lava/Republic Records. The album serves as a companion piece to Black’s upcoming graphic novel of the very same name, which is set to arrive on April 19th.More than likely, you know Andy Black as the lead vocalist of the hugely popular Glam Metal outfit Black Veil Brides. With the band, he has released 5 albums over the past 13 years, most recently 2018’s Vale. With a string of Billboard Top 10 and 20 albums under his belt, Black opted to stretch his creative wings and step outside of the confines of Glam Metal/Hard Rock to author his first solo offering, 2016’s The Shadow Side. The Needle Drop. The Tank. Polynation. Polynation is an electronic music formation that originated from the minds of Stijn Hosman and Hessel Stuut. 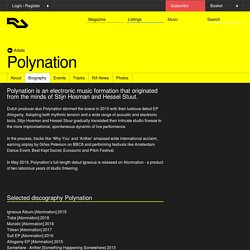 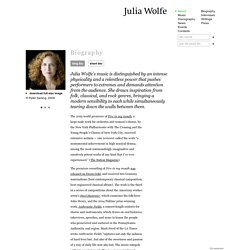 She draws inspiration from folk, classical, and rock genres, bringing a modern sensibility to each while simultaneously tearing down the walls between them. The 2019 world premiere of Fire in my mouth, a large-scale work for orchestra and women's chorus, by the New York Philharmonic with The Crossing and the Young People's Chorus of New York City, received extensive acclaim — one reviewer called the work "a monumental achievement in high musical drama, among the most commandingly imaginative and emotively potent works of any kind that I've ever experienced.

" (The Nation Magazine) The premiere recording of Fire in my mouth was released on Decca Gold, and received two Grammy nominations (best contemporary classical composition; best engineered classical album). CIVIL CIVIC. Taxi-Girl. Links to Records Discussed. David Lang. Restoring and MIDI-fying a Baby Grand Piano · Jacques Mattheij. As much as I love digital instruments, synthesizers and other electronic gear I also really love the look and feel of instruments made from wood, brass, steel and felt. 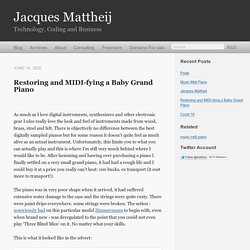 There is objectively no difference between the best digitally sampled pianos but for some reason it doesn’t quite feel as much alive as an actual instrument. Unfortunately, this limits you to what you can actually play and this is where I’m still very much behind where I would like to be. After hemming and hawing over purchasing a piano I finally settled on a very small grand piano, it had had a rough life and I could buy it at a price you really can’t beat: 100 bucks, ex transport (it cost more to transport!). This is what it looked like in the advert: At this point in time I spent a few weeks just playing it and then decided I wanted to ‘MIDI-fy’ the piano to allow me to run Pianobooster on it, a FOSS piece of software that helps you to study playing. Parts & Labor. Drummer Christopher Weingarten left the band in 2008 but they quickly recruited new drummer Joe Wong and added guitarist Sarah Lipstate, turning them into a four-piece band.[1] This lineup recorded Receivers, the band's fourth album, which was released on October 21, 2008 in North America and November 3, 2008 in the UK through Jagjaguwar.[2] Also released in 2008 was Escapers Two, a record which featured 51 songs in around 29 minutes. 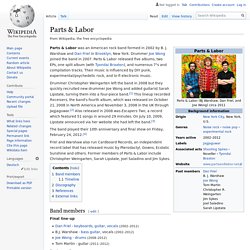 On July 10, 2009, Lipstate announced via her website she had left the band.[3] The band played their 10th anniversary and final show on Friday, February 24, 2012.[4] This Is What a WWII-Era Codebreaking Machine Sounds Like. Coltrane Pitch Diagrams - Lucas Gonze - Medium. What were these? 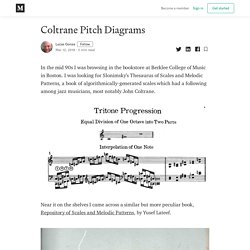 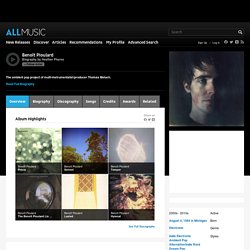 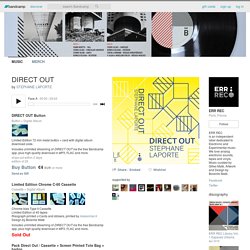 Welcome. Blue Stahli. Timecop1983. Beats. From Physclips. Interference and consonance The ratios 3:2 and 5:4 are called (by many Western people, at least), musical consonances (in just intonation). 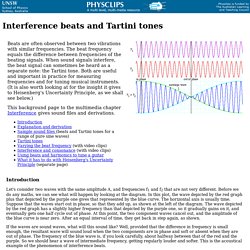 In this example, one tone remains constant at 400 Hz. The other is varied rapidly from 400 to 500 Hz, where it pauses briefly, before increasing to 600 Hz. You may hear a descending Tartini tone during the first of the variations. Album Discography. D∆WN: 'Not Above That' VR Experience. Everyone Is Dirty. Biography & History. Up to the mid-2000s, guitarist Nels Cline was probably best known for his work in the group Quartet Music (with brother Alex Cline, bassist Eric Von Essen, and violinist Jeff Gauthier) as well as other projects in the jazz, rock, and avant-garde idioms, and for his general involvement in the West Coast's improvisation community. 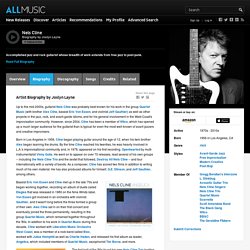 However, since 2004, Cline has been a member of Wilco, which has opened up a much larger audience for the guitarist than is typical for even the most well-known of avant jazzers and creative improvisers. Born in Los Angeles in 1956, Cline began playing guitar around the age of 12, when his twin brother Alex began learning the drums. Songs, Reviews, Credits. On their debut full-length, New York-based quartet Turnip King play a splashy, energetic blend of caffeine-rush indie pop and sprawling psychedelic jams. As contradictory as that sounds, somehow they manage to make it work. Almost all of the album's songs stretch past five minutes, but it rarely seems like they're aimlessly rambling. Kevin Puts: Symphony No. 2; Flute Concerto; River's Rush - Adam Walker,Marin Alsop,Peabody Symphony Orchestra.

For this 2016 Naxos release, Marin Alsop and the Peabody Symphony Orchestra present three world-premiere recordings of works by Kevin Puts, one of the most significant contemporary American composers and winner of the Pulitzer Prize in 2012. The Symphony No. 2 (2002), River's Rush (2004), and the Flute Concerto (2013, revised 2014) reveal Puts as a master of orchestral sonorities and a tone poet of moods, which range from the ecstatic to the elegiac. The Symphony No. 2 is a powerful evocation of 9/11, and Puts creates an atmosphere of tragedy that shifts from the innocent tonal ululations of the opening to a violent cataclysm, which then resolves in a meditative section that nevertheless ends with uncertainty. Atomin Paluu [A Film Soundtrack] - Pan Sonic. Influential Finnish experimental electronic duo Pan Sonic (Mika Vainio and Ilpo Väisänen) officially disbanded at the end of 2009, but several recordings from their final years have surfaced since then.

This album, recorded between 2005 and 2011 and edited by Vainio in 2015, makes up the soundtrack for Atomin Paluu, a Finnish documentary about the construction of the first nuclear power plant since the 1986 Chernobyl meltdown. The duo integrate field recordings from the building site with their usual cold, stark electronics. At times, it's hard to tell if the explosions and drilling sounds are sourced from the construction site or created by Vainio and Väisänen. Igor Stravinsky: Apollo Musagete; Concerto in D; Pulcinella - Joshua Weilerstein,Orchestre De Chambre De Lausanne,Lausanne Chamber Orchestra. Joshua Weilerstein's 2016 release on MDG Gold is an extraordinary recording debut, showcasing his brilliance as a conductor and his strong aptitude for the music of Igor Stravinsky.

He leads the Orchestre de Chambre de Lausanne in stimulating performances of the Pulcinella Suite, the ballet Apollon musagète, and the Concerto in D for string orchestra (also known as the Basel Concerto), all neoclassical works that benefit from the musicians' sharp clarity and virtuosity. The playing is so vibrant and colorful in Pulcinella, one wishes that Weilerstein and the orchestra had performed the entire ballet and given it the same attention to detail and sonic richness. Even so, this performance is a treat, as are the sparkling readings of Apollon musgète and the Concerto. HOME - Official Mr Strange. Music — Lady Lamb.