The Road to Rebuilding Detroit - JPMorgan Chase & Co. - The Atlantic Sponsor Content. Former bankruptcy judge tapped to run Detroit public schools. Anatomy of Detroit’s Decline - Interactive Feature. Forbes Welcome. DPS needs help on debt, Steven Rhodes says. Retired bankruptcy judge Steven Rhodes says there is no alternative plan for addressing the debt crisis in Detroit Public Schools, and lawmakers need to act soon to provide the additional cash the district needs to reorganize and pay its debts — a necessity given the district is expected to run out of money this spring. 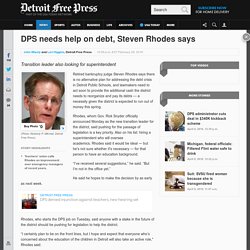 Rhodes, whom Gov. Rick Snyder officially announced Monday as the new transition leader for the district, said pushing for the passage of legislation is a key priority. Also on his list: hiring a superintendent who will oversee academics. Rhodes said it would be ideal — but he's not sure whether it's necessary — for that person to have an education background. “I’ve received several suggestions,” he said. He said he hopes to make the decision by as early as next week. Rhodes, who starts the DPS job on Tuesday, said anyone with a stake in the future of the district should be pushing for legislation to help the district. The district’s needs are dire. 1 of 3 2 of 3 Gov. 3 of 3. For Detroit Schools, Hope for the Hopeless. Steve Wasko, public relations director for Mr. 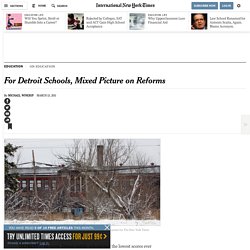 Bobb and the Detroit schools, did not respond to a dozen voice mails and e-mails seeking comment. Those who know Mr. Wasko say he cares about Detroit and is sick of the national media portraying the city as hopeless. Is it? Maybe the best way to say it is: Things are not hopeless, but they are not hopeful, either. In September the district opened a new public school, Palmer Park Preparatory Academy, that is run by teachers instead of a principal. Every week Ms.

It takes practice. Keimon’s mother, Charity Williams, a mail clerk, sent her older son to high school in Ferndale, a nearby suburb, because she didn’t trust Mumford High, the Detroit school he was assigned to. But not Keimon’s teacher, Ms. Photo Down the hallway, in third grade, Emily Wize, who has been teaching 12 years, has every student’s reading scores saved on her laptop. Plan Unveiled to Overhaul School System in Detroit. Gov. 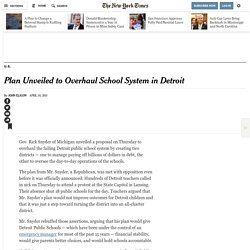 Rick Snyder of Michigan unveiled a proposal on Thursday to overhaul the failing Detroit public school system by creating two districts — one to manage paying off billions of dollars in debt, the other to oversee the day-to-day operations of the schools. The plan from Mr. Snyder, a Republican, was met with opposition even before it was officially announced: Hundreds of Detroit teachers called in sick on Thursday to attend a protest at the State Capitol in Lansing. Their absence shut 18 public schools for the day. Teachers argued that Mr. Mr. “I didn’t want to continue to see emergency managers in Detroit Public Schools continuing,” Mr. The Detroit system has $483 million in operating debt and an additional $1.54 billion in bond debt. The new district would be overseen by a seven-member board that initially would be appointed by the governor and Mayor Mike Duggan of Detroit, before a fully elected board is phased in by 2021.

Crumbling, Destitute Schools Threaten Detroit’s Recovery. Residents wonder how the city can ever recoup its lost population and attract young families if the public schools are in abysmal shape. 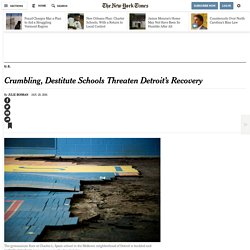 “As we begin to rebuild this city and we’re seeing money and development moving in, people are understanding that there is no way we can improve Detroit without a strong educational system,” said Mary Sheffield, a native of Detroit and a City Council member. “We have businesses and restaurants and arenas, but our schools are falling apart and our children are uneducated. There is no Detroit without good schools.” The bankruptcy of General Motors: A giant falls. Why the School-Choice Controversy in Detroit Is Forcing Parents to Make Sacrifices. For thousands of Detroit families, the daily trek begins in darkness, before dawn. 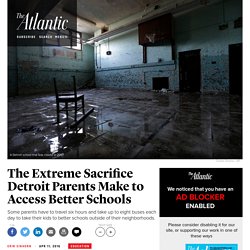 Myesha Williams, a mother of eight on Detroit’s west side, sets out at 7 a.m. to deliver her three school-aged sons to three different schools on opposite ends of the city—and she considers herself lucky. She has a car and a large family that can help share the driving. Total daily journey: up to 93.5 miles, 3 hours. Monique Johnson starts her trek even earlier, just after 6 a.m. when she and her son Shownn, a 13-year-old eighth-grader, catch a ride to a bus stop eight blocks from their home in the city’s Brightmoor neighborhood.

There are closer stops, Johnson said, but they’re pitch black at that hour—and dangerous.