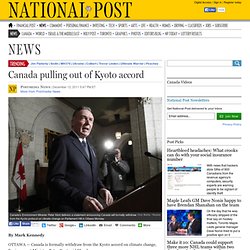 “The Kyoto Protocol does not represent the path forward for Canada,” Kent told a news conference in the foyer of the House of Commons, after his return from an international climate-change summit in Durban, South Africa. “It’s now clear that Kyoto is not the path forward for a global solution to climate change. If anything, it’s an impediment.” Canada will formally withdraw from the Kyoto accord on climate change, Environment Minister Peter Kent said Monday. “We are invoking Canada’s legal right to formally withdraw from Kyoto.” The announcement marks the end of years of controversy — as Prime Minister Stephen Harper’s Conservative government repeatedly made it clear it would not be tied to the international commitment made by the previous Liberal government. Although Canada had ratified the accord, it was not on track to meet its targets. Postmedia News. Life on this Earth Just Changed: The North Atlantic Current is Gone. 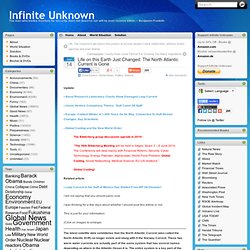 Belief In Climate Change Hinges On Worldview. The big picture: 65 million years of temperature swings. Greenland Temperatures - last 10,000 years. Are we headed for an ice age? (See below for more detail.) David Lappi is a geologist from Alaska who has sent in a set of beautiful graphs–including an especially prosaic one of the last 10,000 years in Greenland–that he put together himself (and which I’ve copied here at the top). If you wonder where today’s temperature fits in with the grand scheme of time on Earth since the dinosaurs were wiped out, here’s the history. We start with the whole 65 million years, then zoom in, and zoom in again to the last 12,000 from both ends of the world. Then again, since T-rex & Co. vanished, it’s been one long slide down the thermometer, and our current “record heatwave” is far cooler than normal. With so much volatility in the graphs, anyone could play “pick a trend” and depending on which dot you start from, you can get any trend you want. — Jo GUEST POST by David Lappi 65 million years of cooling The following two graphs (images created by Robert A.

Jo. Game Over for Planet Earth: The Month’s Biggest Story You Never Read. Climate panel says prepare for weird weather. Extreme weather, such as the 2010 Russian heat wave or the drought in the horn of Africa, will become more frequent and severe as the planet warms, the Intergovernmental Panel on Climate Change (IPCC) warns in a report released today. 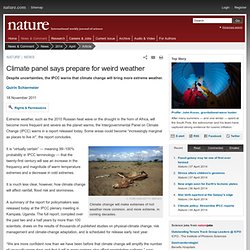 Some areas could become “increasingly marginal as places to live in", the report concludes. Climate change will make extremes of hot weather more common, and more extreme, in coming decades. It is “virtually certain” — meaning 99–100% probability in IPCC terminology — that the twenty-first century will see an increase in the frequency and magnitude of warm temperature extremes and a decrease in cold extremes. 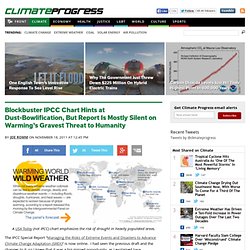 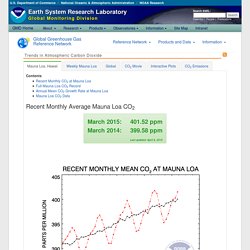 Climate change news, comment and analysis. World headed for irreversible climate change in five years, IEA warns. The world is likely to build so many fossil-fuelled power stations, energy-guzzling factories and inefficient buildings in the next five years that it will become impossible to hold global warming to safe levels, and the last chance of combating dangerous climate change will be "lost for ever", according to the most thorough analysis yet of world energy infrastructure. 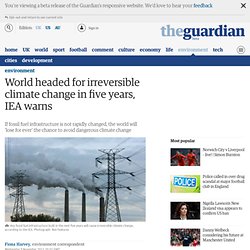 Anything built from now on that produces carbon will do so for decades, and this "lock-in" effect will be the single factor most likely to produce irreversible climate change, the world's foremost authority on energy economics has found. If this is not rapidly changed within the next five years, the results are likely to be disastrous. "The door is closing," Fatih Birol, chief economist at the International Energy Agency, said. "I am very worried – if we don't change direction now on how we use energy, we will end up beyond what scientists tell us is the minimum [for safety].