10 Less Than Heroic Stories Of Survival From The Titanic. Humans Countless stories have been shared about people on the Titanic pulling together to save their shipmates or men stepping aside to let women and children escape on lifeboats. 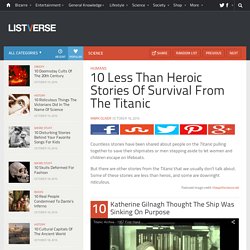 But there are other stories from the Titanic that we usually don’t talk about. Some of these stories are less than heroic, and some are downright ridiculous. 10 Katherine Gilnagh Thought The Ship Was Sinking On Purpose After the Titanic sank, an interviewer asked Katherine Gilnagh when she realized how serious it was. Gilnagh was sleeping when the ship started to sink. Gilnagh described the ship exploding, having to push wreckage away, and pulling people out of the water into her lifeboat.

“I didn’t realize how serious the trouble was,” Gilnagh said when she was in the US, “until I got to this country.” 9 Dickinson Bishop Said He Accidentally Tripped And Fell Into A Lifeboat When the Titanic sank, the men were supposed to let women and children escape first. Dickinson Bishop wasn’t one of those men. Crewman H.G. 10 People Who Did Not Board the Titanic - Titanic Expo. Last lunch menu and artefacts from Titanic's number one lifeboat auctioned. The Titanic’s last lunch menu – saved by a passenger who climbed aboard the so-called “money boat” lifeboat before the ocean liner went down – is going to auction, where it is estimated it will bring between $50,000 and $70,000. 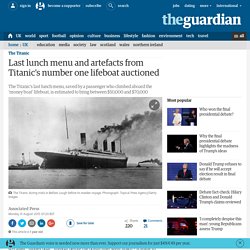 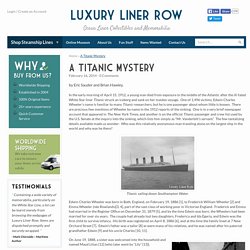 In the early morning of April 15, 1912, a young man died from exposure in the middle of the Atlantic after the ill-fated White Star liner Titanic struck an iceberg and sank on her maiden voyage. One of 1,496 victims, Edwin Charles Wheeler’s name is familiar to many Titanic researchers, but he is one passenger about whom little is known. 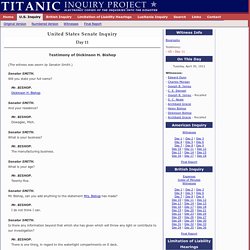 Bishop (The witness was sworn by Senator Smith.) Senator SMITH.Will you state your full name? Mr. BISHOP.Dickinson H. Senator SMITH.And your residence? Mr. Senator SMITH.What is your business? Mr. My grandfather took Titanic's deadly secret to the grave. Louise Patten thought carefully about telling the story of Charles Lightoller [] City high-flier and novelist Louise Patten knows all about this kind of cloak and dagger concealment because for almost a century her own family has kept a secret of historical magnitude. 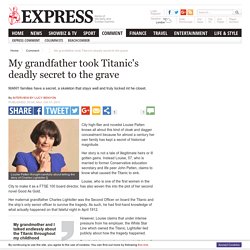 Her story is not a tale of illegitimate heirs or ill gotten gains. Instead Louise, 57, who is married to former Conservative education secretary and life peer John Patten, claims to know what caused the Titanic to sink. Louise, who is one of the first women in the City to make it as a FTSE 100 board director, has also woven this into the plot of her second novel Good As Gold.

10 Less Than Heroic Stories Of Survival From The Titanic. 10 People Who Did Not Board the Titanic. History I am writing this list on the 70th anniversary of the attack on Pearl Harbor, which launched the United States into World War II. 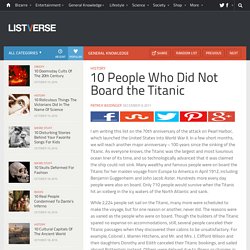 In a few short months, we will reach another major anniversary – 100 years since the sinking of the Titanic. As everyone knows, the Titanic was the largest and most luxurious ocean liner of its time, and so technologically advanced that it was claimed the ship could not sink. Many wealthy and famous people were on board the Titanic for her maiden voyage from Europe to America in April 1912, including Benjamin Guggenheim and John Jacob Aster. David blair titanic. David blair titanic. Lillian Asplund - Lillian Asplund was a survivor of the sinking of the Titanic and the last living American survivor. 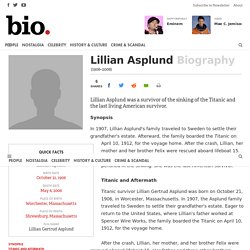 Synopsis In 1907, Lillian Asplund's family traveled to Sweden to settle their grandfather's estate. Afterward, the family boarded the Titanic on April 10, 1912, for the voyage home. After the crash, Lillian, her mother and her brother Felix were rescued aboard lifeboat 15. Her father and three other brothers, including her twin, Carl, perished in the sinking. 10 People Who Did Not Board the Titanic - Titanic Expo. David Blair Questions. I didn't see this thread till just now. 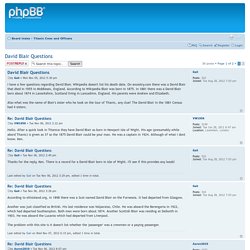 Here are my notes on Blair's involvement in both the 1913 rescue and the Oceanic incident, as well as his OBE investiture: 6 May 1913: David Blair, first officer of Majestic I, jumps from thepromenade deck into the 44F/7C Atlantic to rescue a trimmer who has jumpedoverboard. (See 3 May for this trip's first suicide attempt.) The trimmer,William Keoun, is pulled from the ocean into a lifeboat, which then alsopicks up Blair and takes both men back to the ship. Before Majestic reachesNew York, appreciative passengers will collect a $50 (or $250) purse topurchase a gold medal and pair of binoculars for Blair. 12 July 1913: The Times reports that on the recommendation of thePresident of the Board of Trade, King George V has awarded a medal forgallantry in saving life at sea to Lt. 16 December 1913: At Buckingham Palace King George V presents the Board ofTrade's silver medal for gallantry to Lt. David blair titanic.