Let's Talk Tiki Bars: Harmless Fun Or Exploitation? Archipelago, in Washington, D.C., is among a wave of new tiki bars across the country. 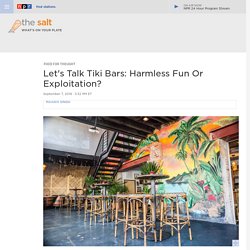 But how do South Pacific islanders feel about tiki kitsch? Frank N. Carlson/Courtesy of Archipelago hide caption toggle caption Frank N. Carlson/Courtesy of Archipelago Archipelago, in Washington, D.C., is among a wave of new tiki bars across the country. Frank N. Say you want to escape the doldrums of daily life — but you can't quite afford a trip to Hawaii. These faux-Polynesian, palm-thatched rum palaces that were all the rage in the 1960s are now making a comeback. The newest, hippest island-themed establishment in Washington, D.C., is called Archipelago — and it's tiki-kitsch to the max. When I meet friends — husband-and-wife duo Eden and Angelo Villagomez — for happy hour here, our first drink is a communal one. "Can we please put that fire out?

" So how did we end up at this boozy, tropical oasis in the middle of buttoned-up Washington, D.C.? The menu at Don the Beachcomber from 1943. Kitsch, Atomic, Retro, Vintage, Mid Century Decor & Nostalgia, DIY Restoration. THE HULA GIRLS: Music video official release! Following a heralded performance at the 2013 Tiki Oasis festival in San Diego, CA, The Hula Girls decided that they just HAD to record a pair of songs that were received especially well! 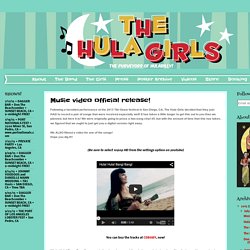 It has taken a little longer to get this out to you than we planned, but here it is! We were originally going to press a two-song vinyl 45, but with the amount of time that this has taken, we figured that we ought to just get you a digital version right away. We ALSO filmed a video for one of the songs! Hope you dig it!! (Be sure to select 1080p HD from the settings option on youtube) 209p0kz. Join Now! 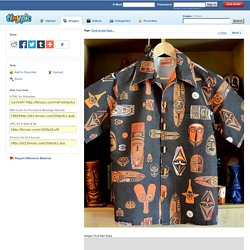 Share Share on redditShare on facebookShare on twitterShare on tumblrMore Sharing Services0 Tools Save your favorites forever! Join for free » Cruise Ship History – The LURLINE was Hawaii. Matson Line’s flagship represented Hawaii to the traveling public and for years provided First Class service from California to Hawaii. The LURLINE was Hawaii! 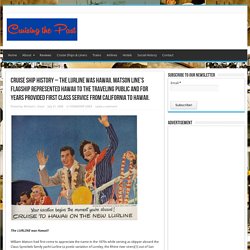 William Matson had first come to appreciate the name in the 1870s while serving as skipper aboard the Claus Spreckels family yacht Lurline (a poetic variation of Loreley, the Rhine river siren)[1] out of San Francisco Bay. Matson met his future wife, Lillie Low, on a yacht voyage he captained to Hawaii; the couple named their daughter Lurline Berenice Matson. Spreckels sold a 150-foot brigantine named Lurline to Matson so that Matson could replace his smaller schooner Emma Claudina and double the shipping operation which involved hauling supplies and a few passengers to Hawaii and returning with cargos of Spreckels sugar.

Matson added other vessels to his growing fleet and the brigantine was sold to another company in 1896.[2] Matson built a steamship named Lurline in 1908[3]; one which carried mainly freight yet could hold 51 passengers along with 65 crew. Cruise Ship History – The LURLINE was Hawaii. Matson Line’s flagship represented Hawaii to the traveling public and for years provided First Class service from California to Hawaii. It's stilltiki time at the Waldorf Hotel. John Mackie, Vancouver Sun Published: Thursday, October 28, 2010 "We'll be able to do lots of very interesting performances [downstairs], because it will be set up to accommodate anything from theatre to dance to a heavy metal band," said Anselmi, 43, who music fans will remember as the singer for local underground heroes Slow and Copyright. 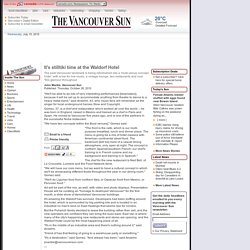 Gomez, 37, is a chef and restaurateur who's worked all over the world -- he was born in England, raised in Mexico and trained as a chef in Paris and Spain. He moved to Vancouver five years ago, and is one of the partners in the successful Nuba restaurant. Tiki bars. VanTiki. VanTiki. VanTiki on Etsy - Sold Items. Squared Idol Old Wood Hand Pressed Tile by VanTiki. Vendors. Featured Vendors Sputnik Housewares » Sputnik Housewares has been selling "Jet Set Furnishings from the Atomic Age! 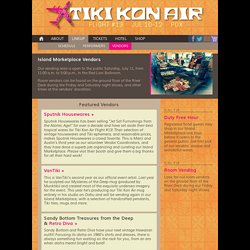 " for over a decade and have set aside their best tropical wares for Tiki Kon Air Flight #13! Their selection of vintage housewares and Tiki ephemera, and reasonable prices, makes Sputnik Housewares a crowd favorite. This is Marci and Austin's third year as our volunteer Vendor Coordinators, and they have done a superb job organizing and curating our Island Marketplace.

VanTiki » This is VanTiki's second year as our official event artist. Sandy Bottom Treasures from the Deep & Retro Diva » Sandy Bottom and Retro Diva have your next vintage Hawaiian outfit! VanTiki. A Collection of Artifacts recently unearthed on VanTiki Island. 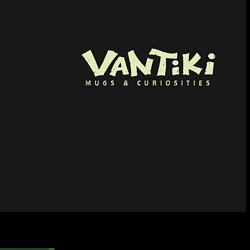 Some of these relics will soon be available for export, and some have already found their way into private hands. Follow our Jungle Dispatches on Instagram and Facebook Henrik Van Ryzin & Denise Van Ryzin make a variety of faux artifacts inspired by Polynesian Pop, adventure, exploration, and South Seas Mystery. Frankies Tiki Room - The Merch Hut. Best Tiki bars in America. Best Tiki bars in America. Frankies Tiki Room - The Merch Hut. Waikiki International Market Place HD 1080p. Guides. Plain vanilla extract is fine for large-batch baking, but vanilla snobs like to play with other varieties, including the skinny, leathery beans. 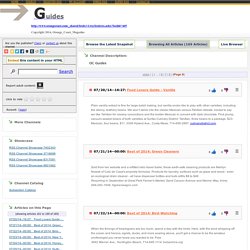 Kevin & Jody Show. Naturally, EVERYONE who walked into our offices while we were working on this guy, wanted one! 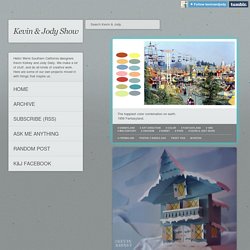 Standing over 7 feet tall, our “Life-Size Jack” had a head as big as a basketball, and a metal frame covered by a custom fabric suit. The challenge was not so much to make Jack look like Jack, but to create a complicated item that could be easily assembled by the “average guest” (whatever that means.) Because of his size and awkward nature, the figure had to be shipped disassembled, to be put together by the customer at home.