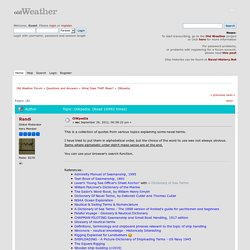 " is being used for Paravane ... These are described as underwater kites, used to stream wires away from ships for minesweeping or other purposes and invented during WW1. RN did use towed devices for a number of purposes. Towed paravanes were used for mine detection and destruction, as Badskittler stated. The towed body was shaped like a seal and was used to draw strong cables out from the ships side. Parchment - The old naval name for a rating's Service Certificate which, until the 1914/18 war, was on real parchment. Passed Having passed an examination for promotion, and awaiting a vacancy in the senior grade: as, a passed assistant surgeon in the United States navy; a passed assistant engineer - [Randi] Patent Log See Log I found this as a def. for pendant.

Auction of Personal Effects - "Sale of effects - started at least in the 18th century, and finished, I don't know when - during or after World War 2? Sounds like an old sailor man on your sail-less vessel. Honeymoon Photo Tour. The Caribbean Caravan. Are Propane and Butane interchangeable with most boat systems? — Noonsite. Question posted 2009-01-17 Hello, We are a US boat sailing in the South Pacific and have a propane based cooking system. 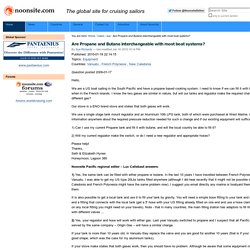 I need to know if we can fill it with Butane when in the French islands. I know the two gases are similar in nature, but will our tanks and regulator make the required change with the different gas? Our stove is a ENO brand stove and states that both gases will work. We use a single stage tank mount regulator and an Aluminum 10lb LPG tank, both of which were purchased at West Marine. 1) Can I use my current Propane tank and fill it with butane, and will the local country be able to fill it? 2) Will my current regulator make the switch, or do I need a new regulator and appropriate hoses? Please help! Noonsite Pacific regional editor – Luc Callebaut answers: 1) Yes, the same tank can be filled with either propane or butane.

It is also possible to get a local tank and use it to fill your tank by gravity. 2) Yes, your regulator and hose will work with either gas. Sailboat demasted after collision with Causeway bridge. Women's Cancer Pictures Slideshow: 15 Symptoms Women Ignore on MedicineNet.com. No 3. - Breast Changes "Most women know their breasts well, even if they don't do regular self-exams, and know to be on the lookout for lumps. 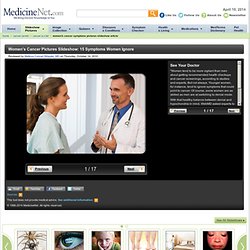 But that's not the only breast symptom that could point to cancer. Redness and thickening of the skin on the breast, which could indicate a very rare but aggressive form of breast cancer, inflammatory breast cancer, also needs to be examined, says Hannah Linden, MD, a medical oncologist who is a joint associate member of the Fred Hutchinson Cancer Research Center and associate professor of medicine at the University of Washington School of Medicine, Seattle. 'If you have a rash that persists over weeks, you have to get it evaluated,' says Linden. 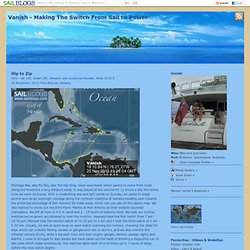 It was played at full volume for 21 hours a day the entire time we were anchored. With a moderating sea and light winds on Sunday, we opted to weigh anchor and do an overnight passage along the northern coastline of Jamaica heading east towards the protected anchorage of Port Antonio 90 miles away, which you can see on the above map. We also wanted to check out the Errol Flynn Marina at Port Antonio as their website sounded marvellous. Last night was particularly exciting as Maynard's daughter gave birth to her 2nd child in England, our 5th Grandchild named Oliver. Our next passage will take us north through the Windward Passage which divides Cuba and Haiti.

Scoring Big Time Jamaica has a long and interesting history. What Garbage.