Betty CK145 original or fake - what is authentic in BETTY CK145? If a ship like the oyster smack BETTY CK145 - particularly one of wood - has become one hundred years old, the question necessarily posing itself: is it original, replica, rebuild or remains glued together with the help of Epoxy? 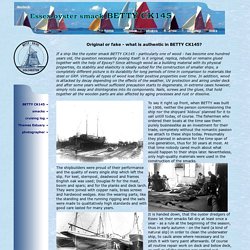 Since although wood as a building material with its physical properties, its stability and elasticity is ideally suited for the construction of smaller ships, a completely different picture is its durability for long periods of time in comparison to materials like steel or GRP. Virtually all types of wood lose their positive properties over time. In addition, wood is attacked by decay depending on the effects of the weather, UV protection and airing under deck and after some years without sufficient precaution starts to degenerate, in extreme cases however, simply rots away and disintegrates into its components. Surface Treatment Chemical. COPPERBRIGHT #25 is a powdered concentrate, which is mixed with water to form a solution used for cleaning metal surface and alloys especially Copper, Brass and Bronze. 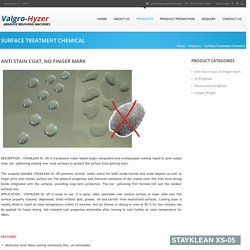 It will selectively remove light Oxides, light Soils, Tarnishes, Fingerprints, etc. effectively without any attack on the base metal. COPPERBRIGHT #25 is designed specially to be used on the exposed area of properly cured resisted inks, photoresists as well as it is organic based chemicals, it is harmless and low inherent toxicity upon direct contact to skin and poses no serious disposal problems in contrast to the conventional pickling solutions.

COPPERBRIGHT #25 is also not corrosive to stainless steel and machine parts. Getting tired of repeat cleaning of Copper & its alloys made, to remain tarnish -free.Now get easy.Soon, after cleaning, applied our Kleannshine OS -100C by simply dip your valuable parts in or spray over the surface required. Amazing before and after examples when using Super Stainless cleaner leaving stainless spotless. Marine Stainless Steel Cleaner for Boats. Vancouver Sailing Club and Sailing School. 24 san juan whit sail. Float plan. Ghost ship Nina: Missing for four months in the vastness of the Pacific, with seven crew presumed dead, is this faint satellite image a glimmer of hope? - Australasia - World. Mystery has shrouded the fate of the Nina, a mahogany schooner which vanished after sailing into a severe storm in June. 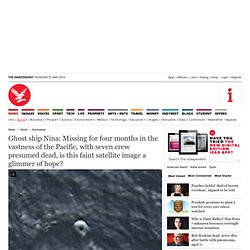 No trace of it was found during a search of more than half a million square nautical miles of the Pacific. The last word from the boat was an undelivered text message reporting: “Sails shredded last night.” Relatives of the crew – six Americans, including David Dyche, the Nina’s owner and skipper, and 35-year-old Matt Wootton, from Orpington, Kent – say the object in the satellite images is the same size and shape as the 21-metre Nina. February-2011.pdf. Survivor's plea over ghost yacht Nina. A man who spent 119 days lost at sea is urging New Zealand authorities to continue searching for the missing boat Nina, saying he is living proof that people can survive against the odds. 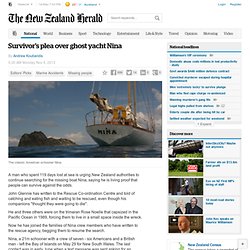 John Glennie has written to the Rescue Co-ordination Centre and told of catching and eating fish and waiting to be rescued, even though his companions "thought they were going to die". He and three others were on the trimaran Rose Noelle that capsized in the Pacific Ocean in 1989, forcing them to live in a small space inside the wreck.

Now he has joined the families of Nina crew members who have written to the rescue agency, begging them to resume the search. Nina, a 21m schooner with a crew of seven - six Americans and a British man - left the Bay of Islands on May 29 for New South Wales. The last contact was in early June when a text message was sent asking for an update on rough weather. It's a Long Shot II. Doug & Susan Pickrell. Details for registered vessel LONG SHOT II (O.N. 834900) It's a Long Shot II. 1981 Hans Christian 43 Traditional Offshore Ketch Sail Boat For Sale - It's a Long Shot II. Holding hope for The Nina: Ghost ship spotted in satellite image drifting off New Zealand. Six Americans and one Briton disappeared after sailing into a stormRelatives paying private firm after authorities called off search in JulyTwo teenagers were among those on board 85-year-old schooner 'Nina' By Jessica Jerreat Published: 23:16 GMT, 15 October 2013 | Updated: 09:47 GMT, 16 October 2013 Grainy satellite images have given fresh hope to the families of seven crew members missing after they sailed into a storm off New Zealand in June. 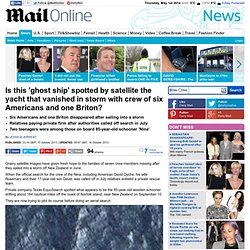 When the official search for the crew of the Nina, including American David Dyche, his wife Rosemary and their 17-year-old son David, was called off in July relatives enlisted a private rescue team. Missing man's family plead for yacht search off New Zealand to go on. The family of 35-year-old British man Matthew Wootton, one of seven passengers on a vintage wooden yacht missing in heavy seas between New Zealand and Australia, still hopes he will be found alive. 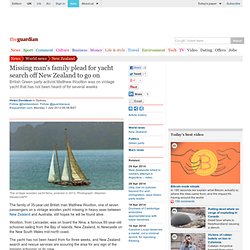 Wootton, from Lancaster, was on board the Nina, a famous 85-year-old schooner sailing from the Bay of Islands, New Zealand, to Newcastle on the New South Wales mid-north coast. The yacht has not been heard from for three weeks, and New Zealand search and rescue services are scouring the area for any sign of the missing schooner or its crew. Wootton, a Green party activist, had been traveling for about three and a half years – mostly in the Americas – and Australia was to be his last stop before heading home, his family said.

Wootton's sister Lara told the Daily Mail her brother was "very environmentally aware" and travelled by boat or public transport when possible. Timor Sea find could be missing American yacht. The American yacht Nina, which went missing while sailing from New Zealand to Australia in 2013. 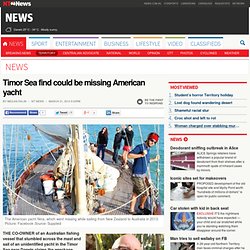 Picture: Facebook Source: Supplied “Mystery” ... Bill Passey Source: Supplied THE CO-OWNER of an Australian fishing vessel that stumbled across the mast and sail of an unidentified yacht in the Timor Sea near Darwin claims the wreckage could be part of missing vessel Nina. There has been no sighting of American schooner Nina after it vanished from the Tasman Sea with seven passengers on board in June last year.

Despite several extensive searches covering more than 615,000 square nautical miles, no trace of the yacht, which was en route to New South Wales from New Zealand, has been found. An Australia Bay Seafoods ship snagged a boat’s mast and sail in its nets about 170km off Darwin last week. Australia Bay Seafoods’ co-owner, Bill Passey, said that it had taken his crew about six hours to ­unhook the net from the wreckage. Buy a boat and learn to sail: 5 lessons for the perfect lifestyle. Feature photo by ccgd. 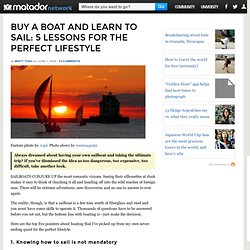 Photo above by ronnie44052 Always dreamed about having your own sailboat and taking the ultimate trip? If you’ve dismissed the idea as too dangerous, too expensive, too difficult, take another look. Ghost yacht: Is it the missing Nina? New satellite images of a vessel or object resembling the missing yacht Nina have been identified - raising crew families' hopes of a resolution to the five-month Tasman Sea mystery. 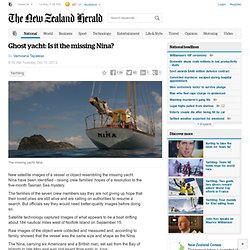 The families of the seven crew members say they are not giving up hope that their loved ones are still alive and are calling on authorities to resume a search. But officials say they would need better-quality images before doing so. Satellite technology captured images of what appears to be a boat drifting about 184 nautical miles west of Norfolk Island on September 15. Float plan.